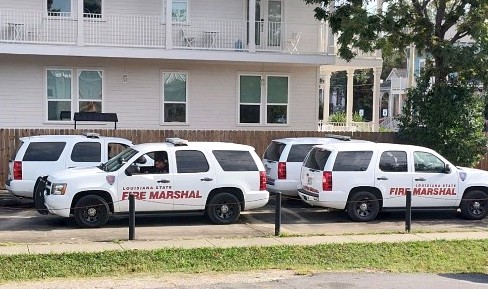 The State Fire Marshal’s Office found no violations during the inspections of Uptown buildings believed to be “doubles-to-dorms” student housing developments. In an effort organized by state Rep. Aimee Freeman, University area neighbors had cited more than 100 buildings in complaints to the Fire Marshal. The complaints stated that the buildings are unlawfully occupied and require safety inspections. The Fire Marshal’s Office announced Monday (Nov. 7) that its team of 19 deputies encountered no life safety concerns or improper commercial use of one- or two-family residences during the inspections. 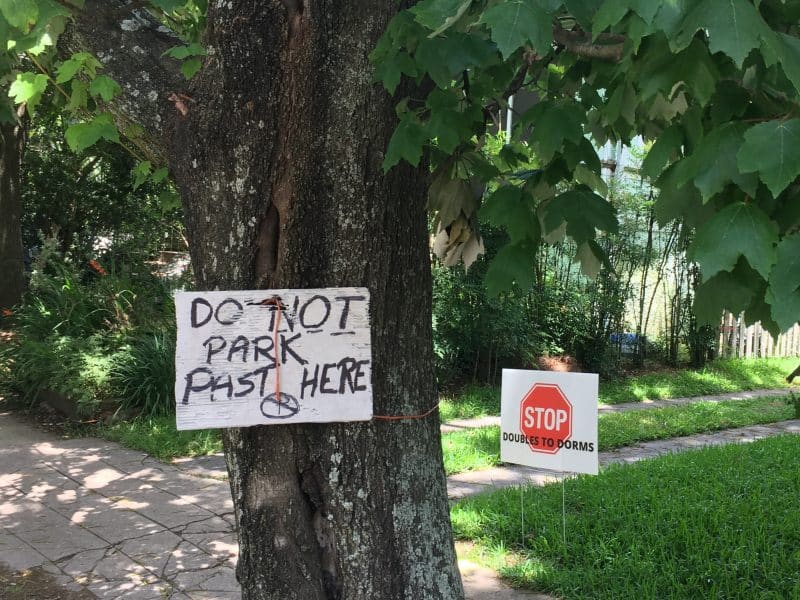 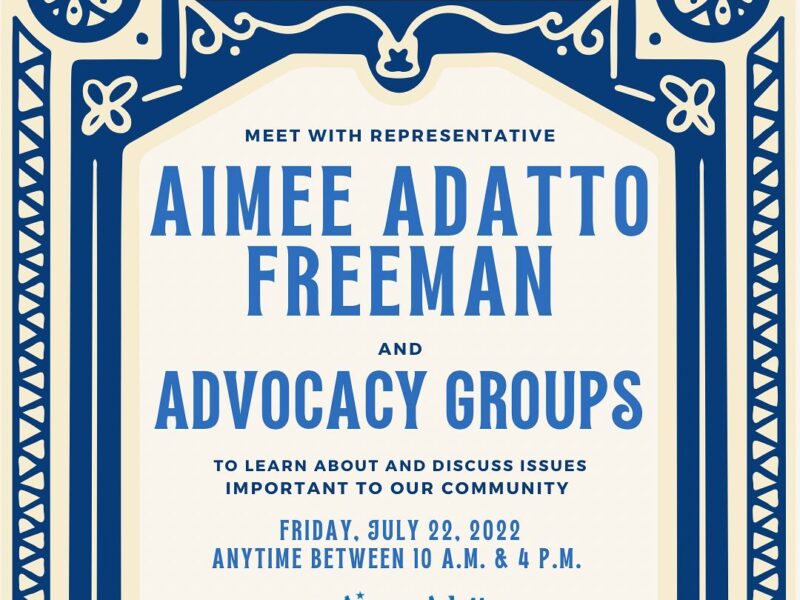 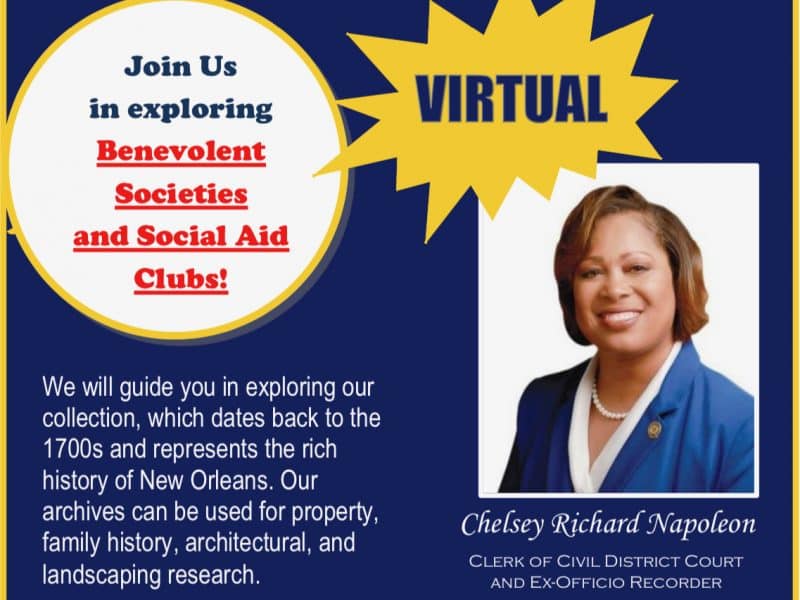 Broad Community Connections is proposing to include the B.W. Cooper public housing site in the South Broad Street Cultural District.

Three original buildings are left of the original Calliope Projects, renamed for B.W. Cooper in 1981. After Hurricane Katrina, the development was shuttered. Most of it was demolished and replaced with Marrero Commons, a mixed-income townhouse-style development. Broad Community Connections, a nonprofit that works with small businesses to redevelop the Broad Street corridor, said about two-thirds of the Marrero Commons complex sits within the proposed expansion area. The proposal would expand the South Broad Street Cultural District to include the land bordered by Earhart Boulevard, South Dorgenois Street, Martin Luther King Jr. Boulevard and South Galvez Street.

The Cultural Districts Program was created by the Louisiana legislature in 2007 to revitalize and preserve cultural hubs within the state.

Irish Channel residents joined forces with residents of Jefferson Parish’s west bank to rid themselves of a noxious smell that has been wafting through their neighborhoods and into their homes for the past two years, Halle Parker reports on NOLA.com, prompting 850 complaints with the Louisiana Department of Environmental Quality. The DEQ identified a west bank bulk liquid storage complex known as BWC Harvey as a possible culprit and has installed an air monitor on Tchoupitoulas Street. The citizens group, backed by the New Orleans City Council, is asking the U.S. Environmental Protection Agency and Gov. John Bel Edwards to suspend BWC Harvey’s pollution permit for review.

It was a productive legislative session for advocates of the Second Amendment, according to attorney Dan Zelenka, president of the Louisiana Shooting Association. “Overall, the 2021 session was quite good,” Zelenka said. “Four of the five bills our statewide organization supported — HB 48, HB 124, HB 597 and SB 118 — are now sitting on Gov. John Bel Edwards’ desk awaiting his signature.”

Although three of the four pieces of legislation sailed through both chambers without significant opposition, Gov. Edwards could decide to veto SB 118, known as the concealed-carry bill. Introduced by state Sen. Jay Morris, R-West Monroe, and passed by a veto-proof majority, the law would allow Louisiana residents who are otherwise qualified to carry a concealed firearm to now do so without first obtaining a concealed weapons permit. Louisiana has always been a state with powerful pro-gun legislative leaders and zealous gun enthusiasts.

Long-time Democrats, the Heitmeiers have been political players on the West Bank for decades. Before David Heitmeier ran for office in 2007, his brother Francis C. Heitmeier served in the Legislature for 16 years. An Algiers-based optometrist, Heitmeier chaired the Senate’s Health and Welfare Committee and was a member of the Environmental Quality, the Revenue and Fiscal Affairs, and the Transportation, Highways and Public Works committees.

He chose not to seek re-election for personal reasons in 2015, a decision that paved the way for then-Rep. Troy Carter to move to the upper chamber in 2016.

Viewpoint: Mail-in ballots are essential for the safety of Louisiana voters

Who wants to potentially put themselves or their family members at risk by voting at a poll on upcoming election days? With Louisiana’s presidential primary and other ballot measures now scheduled for July 11, state officials are squabbling over how to hold safe elections during the pandemic and beyond. Newly minted state Rep. Mandie Landry, District 91, pre-filed House Bill 419, to allow all registered voters to utilize voting by mail in every election. Co-authored by Reps. Aimee Freeman, District 98, and Matt Willard, District 97, this legislation would impact the November elections and beyond.

Put down that beer: Urban South Brewery gets state contract for hand sanitizer

Urban South Brewery, the largest craft brewery in New Orleans, recently won a bid to produce 50,000 eight-ounce bottles of hand sanitizer for Louisiana’s Office of Homeland Security and Emergency Preparedness. The Tchoupitoulas Street brewery has partnered with other Louisiana manufacturers to secure the raw materials necessary to take on this project. Orders for hand sanitizer have exceeded 120,000 bottles from local hospitals, grocery stores, nursing homes and small businesses. “In such unfamiliar and challenging times, it’s important for us to support other businesses impacted by this crisis and support our community in a time of need,” said Jacob Landry, founder of Urban South Brewery, in a press release. “This is a unique opportunity to keep our team employed and working while meeting a critical need in the community that has supported us for the last four years.”
Urban South employees will use their beer production and packaging skills to instead bottle hand sanitizer amid the nationwide shortage.

While some bars in New Orleans hoped they could survive the economic fallout of COVID-19 by selling alcohol to-go, city and state officials have clarified that they must close completely – leading to a peculiar situation where restaurants, breweries and even drive-thru daiquiri shops can sell alcohol to-go, but not regular bars. To stem the spread of coronavirus, on March 16 Gov. John Bel Edwards ordered all bars in the state closed until at least April 13. However, drive-thru daiquiri stores can still remain open and restaurants can still sell packaged beer or wine for curbside pick-up or delivery. Breweries can still sell their beer, though not from the tap. Some bars with kitchens initially thought that they could still employ some staff by selling alcohol and food to-go as well, but officials ordered them to stop.

Gov. Edwards orders everyone in Louisiana to stay at home

Gov. John Bel Edwards issued a statewide stay-at-home order today that goes into effect at 5 p.m. Monday (March 23) to further fight the spread of COVID-19 in Louisiana, as the number of confirmed cases have topped 800 and spread to more than half of of the state’s parishes. “In Louisiana we have taken aggressive measures to mitigate the spread of COVID-19 and flatten the curve; however, this is not enough. As our number of cases continue to grow, I am directing all Louisianans to stay at home unless it is absolutely necessary for you to leave,” Edwards said. The stay-at-home order follows similar guidelines to the order issued by Mayor LaToya Cantrell on Friday. The cases of COVID‑19 in New Orleans on Sunday climbed to 451, with 15 resulting in death.

Viewpoint: Leaders must demand sheltering in place to flatten the curve

Gov. John Bel Edwards and Mayor LaToya Cantrell are being too soft on New Orleans. With the number of confirmed cases and deaths skyrocketing, our elected officials don’t have the luxury of merely suggesting that people stay home as much as possible. Some form of sheltering in place must become the law of the land if we don’t want martial law and the additional restrictions it will bring. Though it might sound extreme, sheltering in place slowed the virus in China and is currently being implemented in Italy, Spain, Belgium and France. The Ukraine has shut down all transportation.

Monday saw the city’s third death of the coronavirus, an 84-year-old resident of the Lambeth House retirement home Uptown, and aggressive measures  on the state and city level to prevent the spread of the disease. Louisiana is among country’s highest per capita rates of COVID-19 infection, with 136 cases as of Tuesday morning, and New Orleans is the epicenter, with 94 presumptive positive cases. On Monday afternoon, following a conference call with the White House, Gov. John Bel Edwards ordered all bars, movie theaters and casinos closed and banned on-site eating in restaurants, restricting them to take-out, drive-through and delivery orders only. The proclamation also limited all gatherings to no more than 50 people. The legislative session is suspended until at least March 31. The restrictions take effect today and will be re-evaluated on April 6.