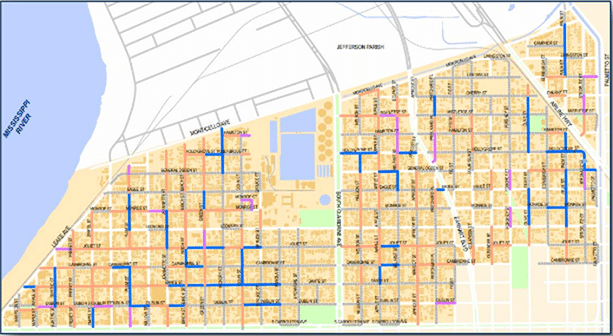 A $15.1 million roadwork project is scheduled to begin today (Monday, April 6) in Hollygrove and Lenonidas, the Mayor’s Office announced. It’s part of a massive capital improvement program for the roads and drainage systems that the city is under a deadline to complete. The $2.2 billion citywide infrastructure program, with more than 200 individual projects, is financed through FEMA, Housing and Urban Development, the Sewerage & Water Board and city bonds. The federal funding has a time limit, city officials say. The infrastructure program is scheduled to be completed by 2023. 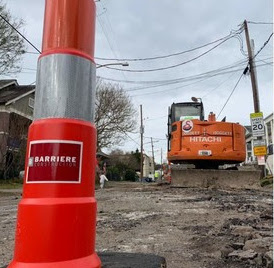 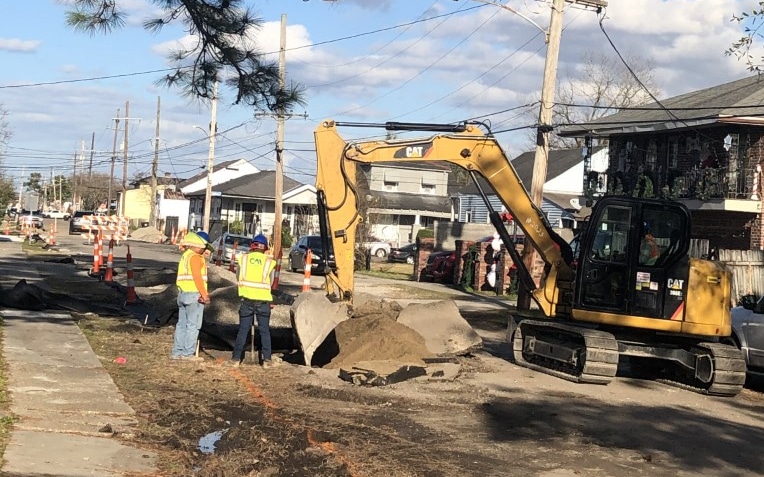 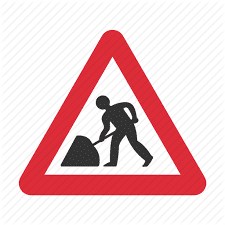 Roadwork ahead for Broadmoor; repaving and waterline work set to begin this month 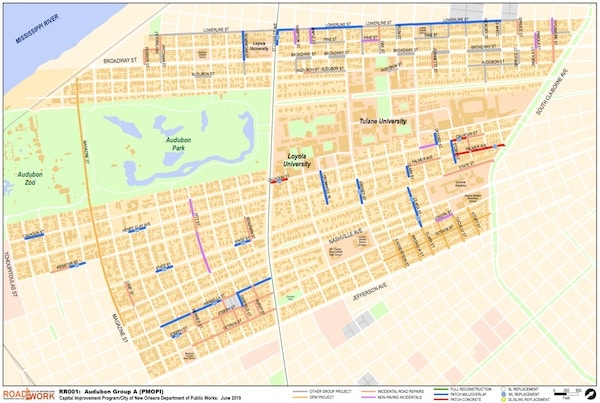 South Claiborne neutral ground is getting a makeover

South Claiborne Avenue is getting an upgrade, with both drainage and beautification in mind, near the Carrollton, Leonidas and Fontainebleau neighborhoods. The U.S. Army Corps of Engineers has begun planting trees on the neutral ground for the restoration project replacing the green infrastructure removed for the construction of underground drainage improvements. The restoration is part of the corps’ Southeast Louisiana Flood Control Project, a $2 billion set of infrastructure improvements meant to reduce the risk of flooding in the event of heavy rain.

From the Sewerage & Water Board

Starting at 8 a.m. today (March 21), Sewerage & Water Board crews will repair a broken water valve on South Carrollton Avenue and Zimpel Street in the Carrollton neighborhood. This work is being done in order to avoid a future unexpected loss of service in this area. This valve replacement will also increase the redundancy needed to protect the distribution system. During this repair, some residents in the Carrollton neighborhood will likely experience low to no water pressure. All water pressure is expected to be restored before the end of day.

Sewerage & Water Board crews will repair a broken water valve on South Carrollton Avenue and Zimpel Street in the Carrollton neighborhood. Repairs will begin Saturday (March 7) at 8 a.m.

Repairs will continue through Sunday. The S&WB said it is making the repairs on a weekend to avoid disrupting service to nearby schools while classes are in session. During this repair, some residents in the Carrollton neighborhood will likely experience low to no water pressure. Residents are encouraged to have bottled water available and make other preparations.

It’s become one of the postcard images of Carnival in New Orleans — beads and other debris lining trees along the Uptown parade route, some to the point of being hardly recognizable. But parade-goers this season on the Napoleon Avenue portion of the route won’t take in any sights that like there — at least if the U.S. Army Corps of Engineers has its way. That’s because over the past week, the corps has installed more than 100 nets to block beads from latching onto trees on the Napoleon Avenue neutral ground — trees that have just been planted in the past month and are still getting used to their environment, according to corps spokesman Ricky Boyett. “The timing and impacts of Mardi Gras season have been a known factor in this project since its early planning. Netting has been placed to shield the trees from beads becoming wrapped around young branches,” Boyett said, adding that temporary fencing has also been put up around trees to keep pedestrians from walking on the developing root systems.

Uptown homeowner Mark Heller noticed what he said had to be a mistake in one of his Sewerage & Water Board bills several months ago. What was usually a bill for around $100 was now a bill for $697 for a single month. There was no explanation. “I would expect there to be a small flood somewhere in my yard with a bill that size, but we don’t see any leaks anywhere,” he said. Heller is not alone in his frustration.

Orleans Parish Civil District Court Judge Nakisha Ervin-Knott ruled that the New Orleans Sewerage & Water Board is legally responsible for the substantial damages caused to more than 350 Uptown homes and businesses as a result of construction of the massive SELA drainage project. The court on Monday, Jan. 6, granted the plaintiff’s motion for partial summary judgment, finding the city agency the sole responsible party for claims of inverse condemnation, custodial liability and timber pile-driving claims.

According to plaintiffs’ attorney Michael Whitaker, all that is left now is for each claimant to prove the extent of the damage to their property. The ruling means claimants who provide evidence of damage will have their claims more swiftly decided and judgment entered in their favor. Trial on the next 20 claims is set for Tuesday, Jan.

The city’s Department of Public Works and the Sewerage & Water Board has planned extensive road repairs in the Freret Street area. A public meeting on Wednesday, Jan. 8, will provide residents an opportunity to learn more about the upcoming Freret Group A project and get their questions addressed, according to a notice from District B Councilman Jay Banks’ office. Roadwork NOLA is hosting the meeting to discuss the repairs scheduled to begin soon in the Freret Street area. They will include:

The Napoleon Avenue neutral ground between Claiborne Avenue and Magnolia Street is in the process of getting a face lift, one designed with both beauty and floodwaters in mind. The new trees and walkway may look like simple landscaping to a passerby, but is actually what the Army Corp of Engineers calls “green space restoration,” a technique that has been shown to reduce flooding. The restoration is part of the Army Corp of Engineer’s Southeast Louisiana Flood Control Project, a $2 billion set of infrastructure improvements meant to reduce the risk of flooding in the event of heavy rain. This is the same project that oversaw the installation of a canal under Napoleon Avenue, the construction that disrupted Carnival celebrations for many in New Orleans. A portion of this neutral ground lies on the parade route and is prime space to set up camp for parade viewing.

The intensity of the July 10 rainfall — with as much as 9 inches in three hours — overwhelmed the city’s pumping and drainage system. Streets were inundated, and many became impassable; cars were submerged; homes and businesses flooded; and the tally of damages went far beyond an annoying commute. Among the rumors circulating after the deluge was the claim that the massive Southeast Louisiana Urban Flood Control Program, or SELA, construction project, designed to reduce the flood risk in certain low-lying areas, hindered the drainage capacity in other areas of the city. The S&WB and the U.S. Army Corps of Engineers are in the final stages of the east bank portion of the federally funded $1.5 billion SELA construction of underground drainage canals. The completed projects are primarily Uptown — in Hollygrove and along Jefferson, Napoleon and Louisiana avenues.

Cars again filled neutral grounds as commuters again navigated their routes to avoid flooded streets on Monday, when 3 to 5 inches of rain fell in a matter of hours. And again, cars stalled, traffic slowed or stopped, and businesses flooded despite sandbag barricades. There’s no stopping the rain, but the city is preparing a major flood-control initiative, Ramsey Green, the mayor’s top aide for infrastructure, told Uptown Messenger last week. “The city, together with the Sewerage & Water Board and the corps, is looking at how can we get some answers,” Green said. The Army Corps of Engineers, the S&WB and the city’s Public Works Department are conducting subsurface analytics of the city’s drainage system, Green said, primarily concentrating on areas where drainage is especially slow.