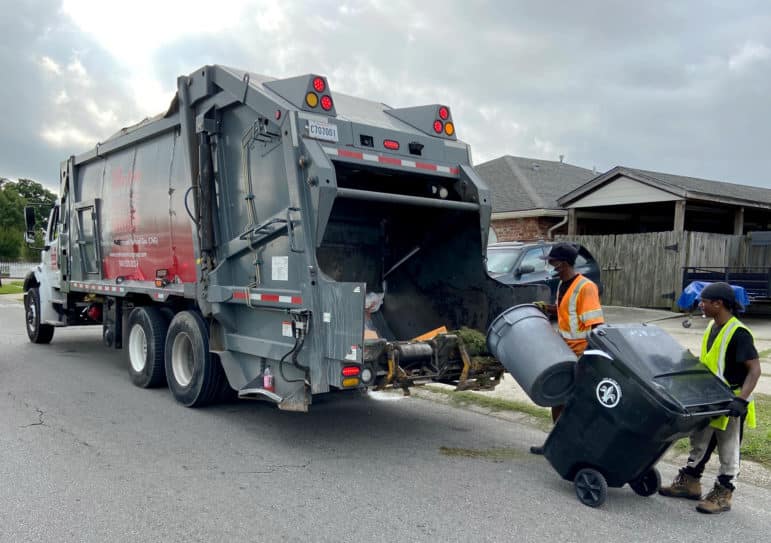 As garbage pickup begins to stabilize in the Uptown and Mid-City neighborhoods, city officials are looking at why the basic city service collapsed in recent months.

As bins spilled over with garbage and languished on the curb, the city’s 311 system recorded 3,638 sanitation complaints within the first 19 days of January alone. District A Councilman Joe Giarrusso said in a recent newsletter that his office received close to 400 complaints in the past few weeks over missed trash and recycling pickups.

Most of those complaints were in the areas served by Richard’s Disposal. Owner Alvin Richard, a four-decade veteran of the local disposal business, appeared before a recent the City Council’s Community Development Committee to answer questions about the missed pickups, a problem that came to a head over the holidays.

Richard’s Disposal, a primary contractor for the city since 2007, has performed well up until the pandemic and Hurricane Ida sent more trash to the curbs, said Joseph Threat, the city’s deputy chief administrative officer for infrastructure, at the Jan. 11 meeting.

Frustration with the service can be seen in the flood of missed-pickup complaints directed in City Council offices. District B Councilwoman Lesli Harris said she has two employees devoted to answering emails, texts and calls about missed trash collections.

Complaints about missed trash pickups in District A from December 2022 to January 2023. (Click to enlarge)

On Dec. 16, the city gave notice to Richard’s Disposal that the company had 30 days to remedy the missed garbage collections. A few weeks later, city officials and Richard’s agreed to pay for supplemental crews to get the trash schedule back on track.

“There were some labor disruptions that destabilized the local labor market as a direct result of the city hiring to two contractors that are paid dramatically higher rates,” said Daniel Davillier, an attorney for Richard’s Disposal, at the committee hearing.

A low-bid contract signed in 2017 gave Richard’s Disposal $13.75 a month for each household on its routes. IV Waste and Waste Pro, the two garbage contractors who took over the Metro Disposal’s routes, are paid twice as much, from a $23 to $28 a monthly, for garbage and recycling pickup.

“Obviously, from an economic standpoint, they’re in a position to pay more money to the employees,” Davillier said. “Some of those employees worked for Richard’s Disposal for many years but left because they were able to get higher wages from the new companies. So that labor disruption is real, and it has impacted the delivery of service.”

Richard’s $13.75 per-house monthly payment was never adjusted for inflation, city officials said. The company is in discussions with the city to stay in operation for the remainder of its contract, Davillier said, adding that lower payment is “the root cause of the issue.”

Richard’s Disposal has another 18 months on its contract. In the meantime, Alvin Richard said, he’s supplementing his workers’ pay out of his pocket to give them parity with other sanitation workers.

“I’ve been at this 44 years,” Richard said. “This is the worst in my service area that I’ve ever seen in all of these years, and it’s mostly because of the labor pool and the pay.”

The administration’s Threat told City Council members that the city was putting together a “get-well package” for Richard’s Disposal.

Media reports have noted that, with the demise of Metro, Richard’s is the city’s sole African-American owned trash collection company.

“All of those are unfair, competitive issues that should have been dealt with a long time ago,” Giarrusso saids. “My frustration is everybody could see this coming from a country mile away.”

The problems did not start with the new vendors, Giarrusso also said, rattling off the number of trash complaints the city received in 2022: 1,280 in May, 784 in June, 1,014 in July. IV Waste and Waste Pro crews hit the streets in November.

“This has been a consistent and persistent problem for a long time,” Giarrusso said.

While costs ballooned with new contracts and the need to supplement the Richard’s Disposal contract, Giarrusso said many of the constituent complaints involve the $24 charge for trash collection on everyone’s monthly Sewerage & Water Board bill.

That fee covered twice-a-week trash collection and weekly recycling collection until Hurricane Ida. With a $15 million deficit projected for the city’s Department of Sanitation, as shown in the chart below, it doesn’t look like we can expect an increase in garbage collection anytime soon.