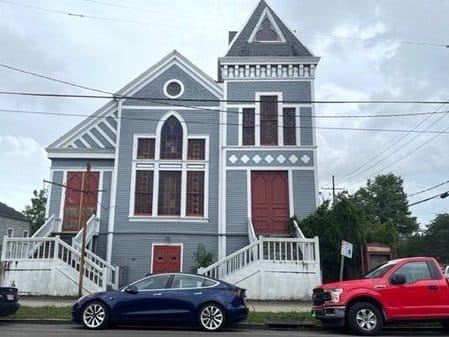 The NOLA Baptist Church, a fledgling Uptown congregation, plans to lease it from Hobby Lobby, the church’s pastor, the Rev. Kyle Jagers, confirmed on Monday (Dec. 5).

“We have entered into a lease with them as the tenant,” Jagers said. “As the tenant, we will begin work to restore the property to its historic value and appearance. The property will be used as a church and only as a church.”

Earlier this year, NOLA Baptist Church, had entered into an agreement with NOBA to purchase the property for a reported $559,000 with plans to restore both the historic property and its original mission.

That deal was dissolved, Jagers told Uptown Messenger in August, and a third party was negotiating with the owner, the New Orleans Baptist Association, and would lease it to NOLA Baptist. He could not name the third party at that time.

The New Orleans Baptist Association has owned the property since 2014, when the Valence Street Baptist Church’s dwindling congregation turned it over to the religious group after it could no longer afford the upkeep.

The building at 4620 Magazine — believed to be designed by prominent architect Thomas Sully — continued to deteriorate over the years, according the Louisiana Landmarks Society, which placed it on its 2022 list of New Orleans’ Most Endangered Sites.

The pastor and congregants of the Valence Street Baptist Church reportedly chose to give the title to the New Orleans Baptist Association so that the building’s original mission could continue.

According to Jagers, that mission will be continuing under the Hobby Lobby ownership. “We are confident of our long-term occupancy and use of this property as a church,” Jagers said.

Hobby Lobby did not respond to a request for information on its plans for the property.

The Hobby Lobby chain is known for policies and actions that reflect its owner’s conservative Christian values. Its name was in the news after it sued the federal government, for example, over an Affordable Care Act mandate to provide employee coverage for contraceptives, a case the company eventually won with a 5-4 U.S. Supreme Court decision.

The sale includes the landmark church, an ancillary building and the land in between.

The Valence Street Baptist Church is a 1885-86 wooden building in the Stick Style, a design trend that preceded the Queen Anne style championed by Sully. In 2004, it was featured in the Ray Charles biopic “Ray.”

The church grew from an evangelical mission that first opened in a Valence Street house in 1880. It was an outgrowth of the Mississippi Baptist Convention’s 19th century effort to establish more churches in New Orleans, according to a Society of Architectural Historians description of the building.

This report was edited after posting with information with the NOLA Baptist pastor.