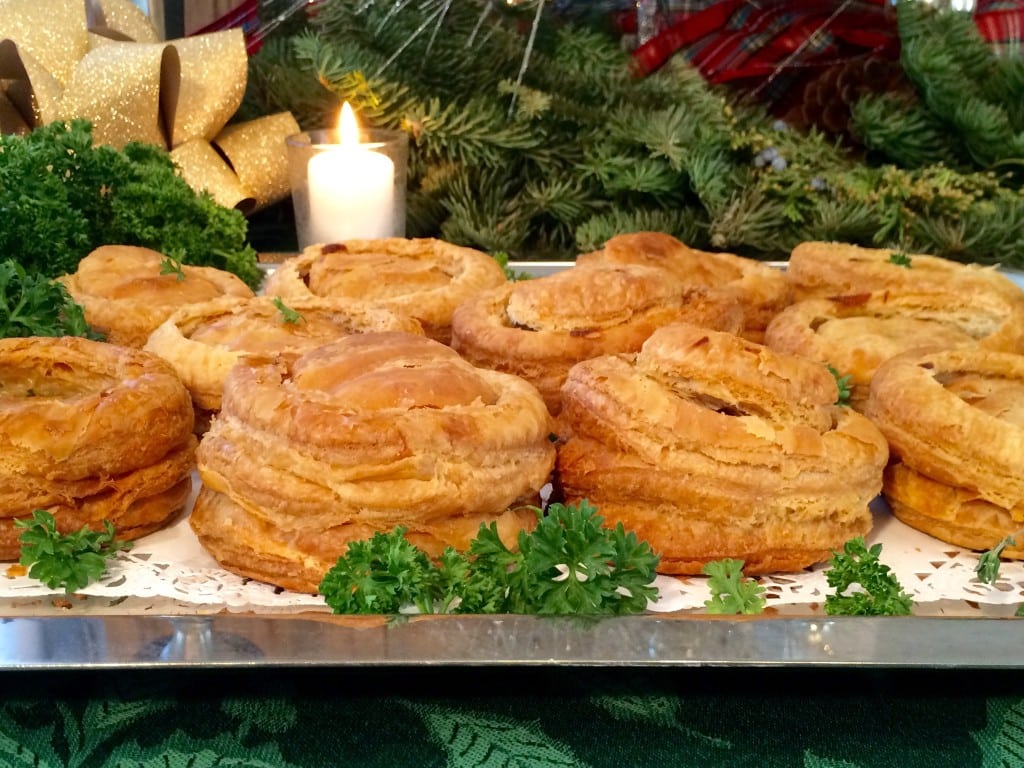 Family recipes are being shared and Christmas meals planned. What is served between the starter and dessert varies from household to household, but dinner traditionally begins with Creole Oyster Patties and ends with Creole Bread Pudding, topped with Whiskey Sauce.

Everyone loves Oyster Patties. No culinary topic in New Orleans evokes the response that an Oyster Patty can. Locals will begin by sharing who in their family cooked them, how they were made, and over which particular holiday the Oyster Patty held court. The conversation then rapidly turns to recipe variations, including mushrooms or no mushrooms and cream or no cream. Next, we reminisce about the loss of McKenzie’s Pastry Shoppe patty shells.

The New Orleans Oyster Patty tradition harkens back to Creole New Orleans. The origins of the French dish entered the New Orleans lexicon of cooking as far back as the 1840s.

It was already a mainstay of Creole entertaining before the turn of the century. Bouchées d’Huitres are documented in New Orleans cookbooks as early as 1922. Oyster Bouchées, Oyster Vol-Au-Vents — or, as they have come to be known, Oyster Patties —continue to be a mainstay in New Orleans entertaining and holiday meals. 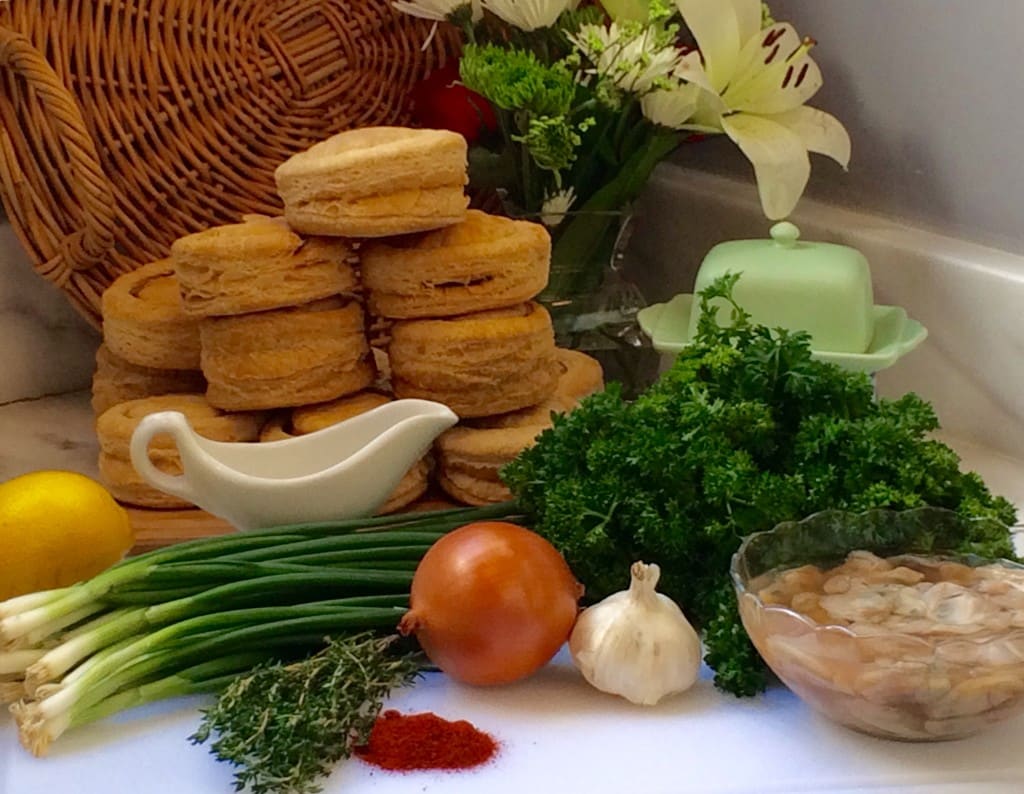 The following is how I remember helping to cook Oyster Patties as a child. This recipe comes from my Grammy.

Preheat oven to 350 degrees. Place patty shells on a baking sheet and lightly brown in oven before filling. Carve the lids, then gently remove the center creating a little cup and set aside.

Strain oysters reserving oyster liquor, a precious commodity — do not spill a drop. Coarsely chop oysters if large, cut in half if small, and place to the side. Sauté seasonings in melted butter until soft, then add garlic and sauté until translucent. Over low heat, add flour slowly stirring into seasoning until smooth. Add oyster liquor, cayenne, cream and thyme, stirring gently for about 5-6 minutes.

Add the oysters and cook until the edges begin to curl. Season to taste with salt, pepper and Tabasco. Remove from heat. The mixture should be thickish and creamy. Add more flour and cream, if necessary, but remember to balance the seasoning accordingly. Spoon oyster filling into individual patty shells and place “lids” on each patty.

Bake for 12-20 minutes or until golden brown and filling begins to bubble. Serve hot directly from the oven.

Traditional patty shells can be purchased at local bakeries such as Haydel’s Bakery, Swiss Confectionary Bakery and Maurice French Pastry. 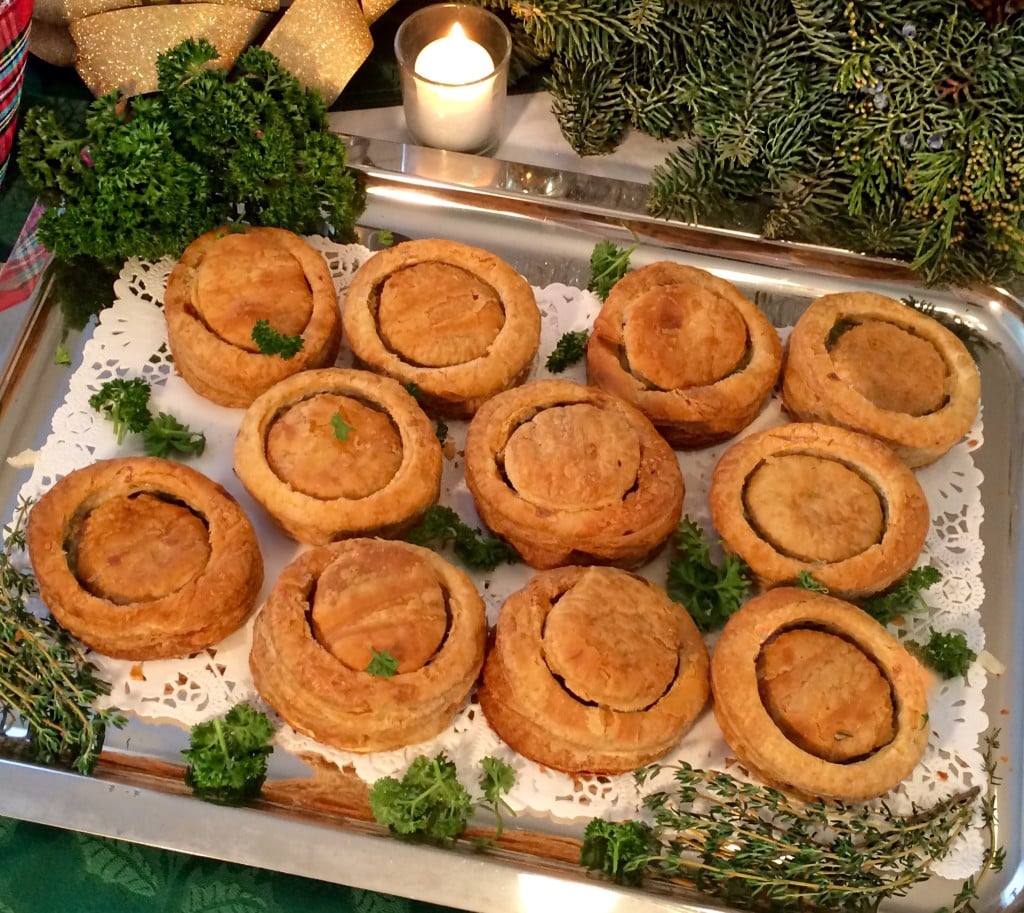 Creole Bread Pudding also has roots in the city’s culinary history. Creoles were known for their thrift, and no baguette went to waste in a Creole kitchen. If you’re planning on making this dish, use a thick loaf of Leidenheimer purchased the day before.

Our family’s Creole Bread Pudding is below; the ingredients are up for loose interpretation, and any fruit can be substituted. However, Whiskey Sauce is non-negotiable. If you make it, don’t be stingy with the booze. The better the whiskey, the better the sauce. If bourbon is too sweet for your taste, try Irish whiskey. If it’s not sweet enough, try rum.

To meringue or not is a personal decision. It’s not really traditional to Louisiana, but it is a great addition. Chopped dates, apples, walnuts, golden raisins or currents are also a choice. The oldest Creole recipes, or receipts, call for dried currants. 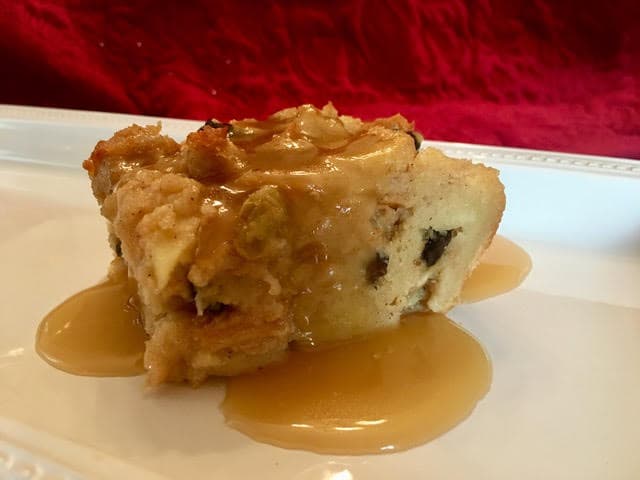 Begin with a large, deep mixing bowl. Add the milk, sugar, vanilla, melted butter and fruits. Whisk the eggs separately, then add to the milk mixture. Tear the bread apart in 1- to 2-inch pieces. Toss the bread into the milk and egg mixture until well coated, then soak to saturate for 30 minutes.

Use butter to grease a large baking dish or brownie pan, dotting the remainder of the butter on top of the pudding before baking. Bake at 350° for 30-40 minutes until the pudding is fluffy and golden on top.

Melt the butter in a saucepan over low heat. Add the sugar and the whiskey, blending until melted and smooth.

Beat the egg in a separate bowl and then slowly add a bit of the hot butter and whiskey mixture to the egg, whisking as you go. Temper the mixture by gradually stirring about a quarter of the hot mixture into the eggs.

Add the egg mixture to the rest of the whiskey mixture and return to the stove. Cook for one minute on very low heat. Pour into a gravy boat and serve warm over the bread pudding. 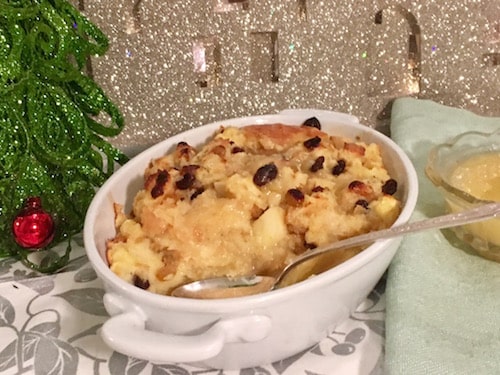