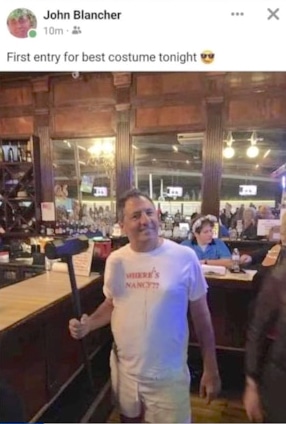 A tweet posted by Rock ‘n’ Bowl owner John Blancher spurred an outcry over the weekend. Blancher has since removed it from his social media accounts.

I am disappointed that Rock ‘n’ Bowl owner John Blancher posted what he considered a harmless photograph of a patron in his establishment last weekend who was wearing a T-shirt that posed the question “Where’s Nancy?” The customer was also holding a sledge hammer that mimicked the hammer used to beat on octogenarian Paul Pelosi, husband of House Speaker Nancy Pelosi, at their San Francisco home recently.

When questioned by a NOLA.com reporter, Blancher said it was not his intention to offend anyone or drive customers away from his place of business. He somehow did not realize the post was, at minimum, in bad taste and lacking in the courtesy and politeness that are hallmarks of a civil society. Courtesy and politeness — do those attributes even exist in today’s politics?

Blanchard isn’t the only well-known Louisianian who has disappointed me recently. Let’s move on to U.S. Rep. Clay Higgins, R-Lafayette, who promoted a false conspiracy theory about the Pelosi attack on Twitter. U.S. Rep. Troy Carter, D-New Orleans, was the only member of the Louisiana delegation to challenge him publicly.

Congressman Steve Scalise, who did a yeoman’s job this week attacking FEMA on flood insurance increases, certainly must take some heat from his blatant lies about Speaker Pelosi’s role in summoning the cavalry to stop the Jan. 6 insurrection. U.S. Sen. John Kennedy frequently makes comments that sound good on national television but make his constituents seems like ignorant buffoons.

Is democracy as we know it in America facing danger in these mid-term elections? President Joe Biden has said so repeatedly, and he sharpened his message Tuesday night when he connected political violence and election lies. “In this moment, we have to confront those lies with the truth,” Biden said. “The very future of our nation depends on it.”  With Biden’s low approval ratings, not all Democrats are rallying around the president. Yet they do agree that candidates should be elected at all levels of government who are committed to building a democratic society — not destroying it.

There are broad divisions in America today — even broader divisions in New Orleans. Voters nationally are focused on inflation, crime and our porous U.S. borders. When the price of gas rises, so do fears of an upcoming recession.

As Republicans gain ground in tight races around the country, the razor-thin majority that kept Democrats in power in Washington might be slipping away. While early voting in New Orleans got off to a strong start, the momentum did not continue. A low turnout is predicted for Tuesday (Nov. 8).

Several polling locations have moved in Orleans Parish — including the precincts that were previously located at the Austerlitz Baptist Church, which burned down earlier this year. Click here for a complete list of polling locations.

5 thoughts on “Viewpoint: Does civility still exist in our society?”