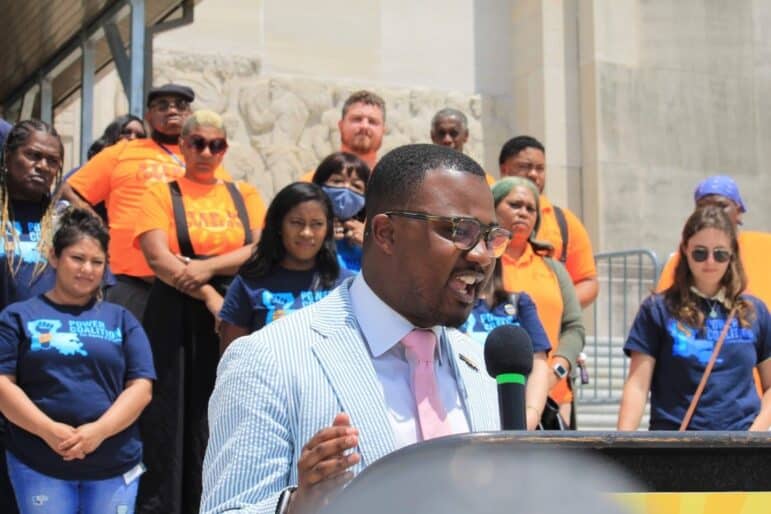 Davante Lewis of Baton Rouge will challenge the incumbent in the Public Service Commission runoff.

Incumbent District 3 Louisiana Public Service Commissioner Lambert Boissiere III launched a scathing attack Wednesday night (Nov. 9) on outside forces that he said precipitated the runoff in his bid for a fourth and final term on the PSC. “Almost $1 million dollars in dark money poured into my race from donors outside of Louisiana. Their purpose was not to support another candidate but just to pull votes from me,” Boissiere told a roomful of New Orleans Democratic leaders. The PSC race is the only New Orleans contest on the Nov. 8 ballot where one candidate did not receive 50% of the vote.  A run-off election will take place on Dec. 10.

Boissiere received 43% of the vote against four other candidates. Davante Lewis, a young Baton Rouge policy advocate, ran second with 18% of the vote. The Rev. Gregory Manning ran a close third with 17% of the vote, followed by Willie Jones and Jesse Thompson. The district stretches across 10 parishes from New Orleans up the Mississippi River to East and West Baton Rouge.

The Public Service commissioner in the District 3 PSC seat, Boissiere said, represents more Black Louisianians than any other, including U.S. Rep. Troy Carter; the PSC district has 100,000 more voters than the 2nd Congressional District. Boissiere said the position has always been “a New Orleans seat” and should not be filled by an untested candidate from the northern end of the district. Lewis, who lives in Baton Rouge and works for the Louisiana Budget Project, is a native of Lake Charles. Lewis unsuccessfully ran for the East Baton Rouge Metro Council last year.

Boissiere asked local Democrats to continue their support and help him get voters to the polls for the runoff. “This election is midway between Thanksgiving and Christmas. Voters will have a lot of other things on their minds. Turnout will be low,” Boissiere concluded.

The Environmental Defense Fund (EDF) donated at least a $500,000 to educate voters about Boissiere’s record and donor base, which is filled with companies regulated by the PSC and their executives. The opposing candidates attacked Boissiere about his voting record throughout the campaign. Lewis took best advantage of Boissiere’s negative fallout, especially with progressives.

Lewis is supported by Voters Organized to Educate (VOTE), a nonprofit focused on building collective power in the criminal legal system. Founded by Norris Henderson, VOTE and its sister organization, Voice of the Experienced, are powerful forces with progressive voters.

Until this campaign cycle began, the Rev. Manning was the leader of Justice & Beyond, a civil rights coalition that fosters systemic change. More than seven years ago, Norris Henderson and J&B parted ways after several of J&B’s leaders backed Sheriff Marlin Gusman, whom Henderson and his group opposed. That riff never healed — opening the way for Lewis to gain their support and the votes that came with it. That support enabled Lewis to run slightly ahead of Manning.

Boissiere’s ability to run first was due in part to the war chest he brought into the campaign. While his opponents were in the early organizational and fundraising stages and EDF had not yet committed to the race, Boissiere was spending money on media and consultants. He was communicating with chronic voters in advance of absentee ballots being distributed. Many early voters chose Boissiere because they had not heard his negatives. Boissiere did exceedingly well in early voting in Orleans Parish which gave him a buffer to offset softer support in other geographic parts of the district.

Boissiere would not be in a runoff if PSC candidate Willie Jones had deep pockets. After Boissiere qualified, Jones researched Boissiere’s file with the state ethics board and found that Boissiere had unpaid fees which could have caused his removal from the race. Jones said he did not have the funds available funds to mount the necessary court challenge. Instead, he began telling political insiders what his research revealed. Boissiere got wind of the situation, paid his ethics fees and was able to pay to qualify a second time before the deadline. Mayor LaToya Cantrell faced a similar situation in her second term. After Cantrell qualified, she realized outstanding fines existed, paid them and also paid to qualify a second time before the deadline.

The runoff for this seat will be quick and dirty with early voting beginning right after Thanksgiving. Currently the PSC chair, Boissiere is probably already reaching out to his opponents who finished third and fourth for their support. He still has the ability to raise another $100,000 or more if needed from the industries the PSC regulates. Those very industries will go to great lengths to keep their trusted friend in office. Lewis’ fundraising will also pick up from grassroots donors who support environmental issues. The EDF and other major environmental groups might also smell blood and step in with a new campaign.

Boissiere said the voters of New Orleans have always benefitted from his service on the commission and that he is able to work with everybody from big business to the smallest pastors. More than 50% of voters did not agree. The election of Lewis would upend the SPC and the way the little-known agency has always done business. Perhaps a breath of fresh air is long overdue.

When two excellent candidates run against each other, their constituents reign victorious. In the District 5 state Senate race, abortion rights also came out on top. The highly capable Rep. Royce Duplessis will serve as the next state senator representing New Orleans and has pledged to lead the way on pro-choice issues. Rep. Mandie Landry, already the state’s No. 1 legislator on abortion rights, will continue her leadership role. Together they could be a powerful team for women’s rights.

The Independent Women’s Organization will also host Rebecca Tong, a nationally recognized pro-choice advocate at their annual luncheon this Saturday, November 12 at The Cannery. The co-executive director of Trust Women Kansas, Tong will discuss their successful campaign to save abortion in that state. The luncheon begins at 10 a.m. Tickets can be purchased at www.iwoneworleans.org.