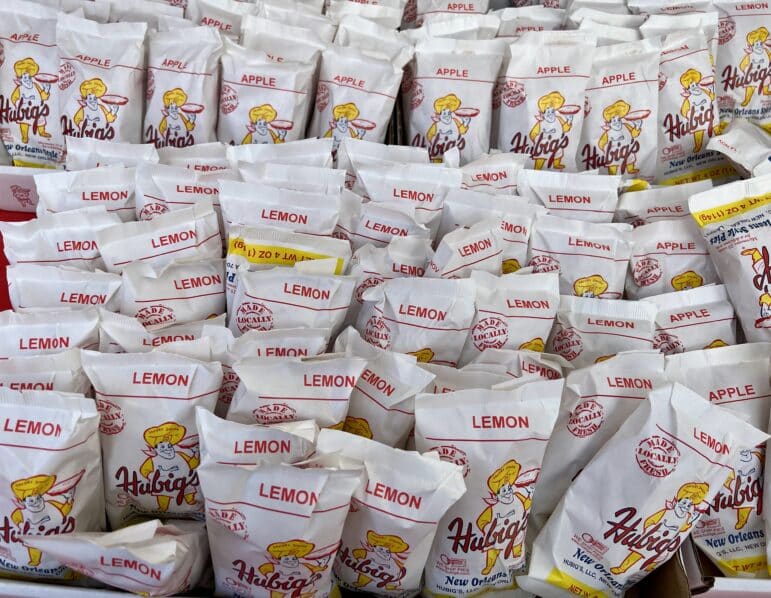 Lemon and apple Hubig’s hand pies will return to stores Monday after a 10 year hiatus. Other flavors will follow.

When word spread on Sunday (Nov. 6) that Hubig’s Pies was back after 10 years, the news was met with shouts of glee, followed by the sounds of locals running down sidewalks and cars racing across parish lines.

The day before hitting the store shelves, Hubig’s Pies popped up in a South Carrollton Avenue parking lot.

Tires across the city sped across potholes at axle-breaking speeds to reach the limited run of 7,000 pies before they were gone. Locals were racing down South Carrollton to the Hubig’s Pies pop-up at the Whitney Hancock Bank parking lot, as the Oak Street Po-Boy Festival drew crowds a block away.

Gridlocked drivers shouted to passers-by, “Are there any pies left?” Those lucky enough to score a pie — and a parking spot — danced to the Rebirth Brass Band, pies in hand.

That first batch of 4-ounce hand pies sold out by 12:30 p.m. Another 2,000 were rushed from the new bakery and vanished in minutes.

In total, 9,000 fried hand pies were sold while the sun still shone brightly in the hot November sky.

“We only knew late yesterday that they could sell pies this weekend,” said co-owner and brand manager Kathleen Ramsey.

Kathleen and Andrew “Drew” Ramsey are the third-generation of his family in the business. They were in a partnership until acquiring the Hubig Pies company in 2019, seven years after a fire destroyed the Faubourg Marigny factory and shut down operations.

Drew’s father Otto Ramsey was also on hand to help sell pies and celebrate their return. Otto began his career with the company in the 1960s. His father began working at Hubig’s in the 1940s. 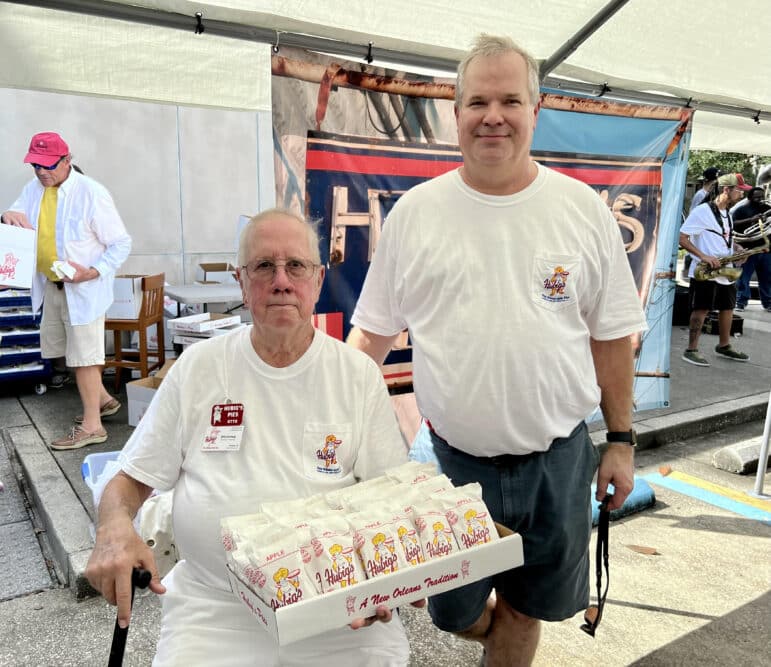 Otto and Drew Ramsey are back selling pies at the pop-up Sunday.

The couple said Hubig pies will be back in stores on Monday, with local Rouses on the distribution list. The new price will be $2.49 per pie, about double their price 10 years ago. At the pop-up, they sold for $3 a pie.

“We’re making the pies as fast as we can,” Ramsey said. To start, they are making only the lemon and apple varieties.

“We’re hoping to roll out sweet potato before the holidays,” Ramsey said. “Then chocolate, coconut, peach and finally pineapple.” Seasonal flavors like strawberry, banana and blueberry will follow sometime next year. 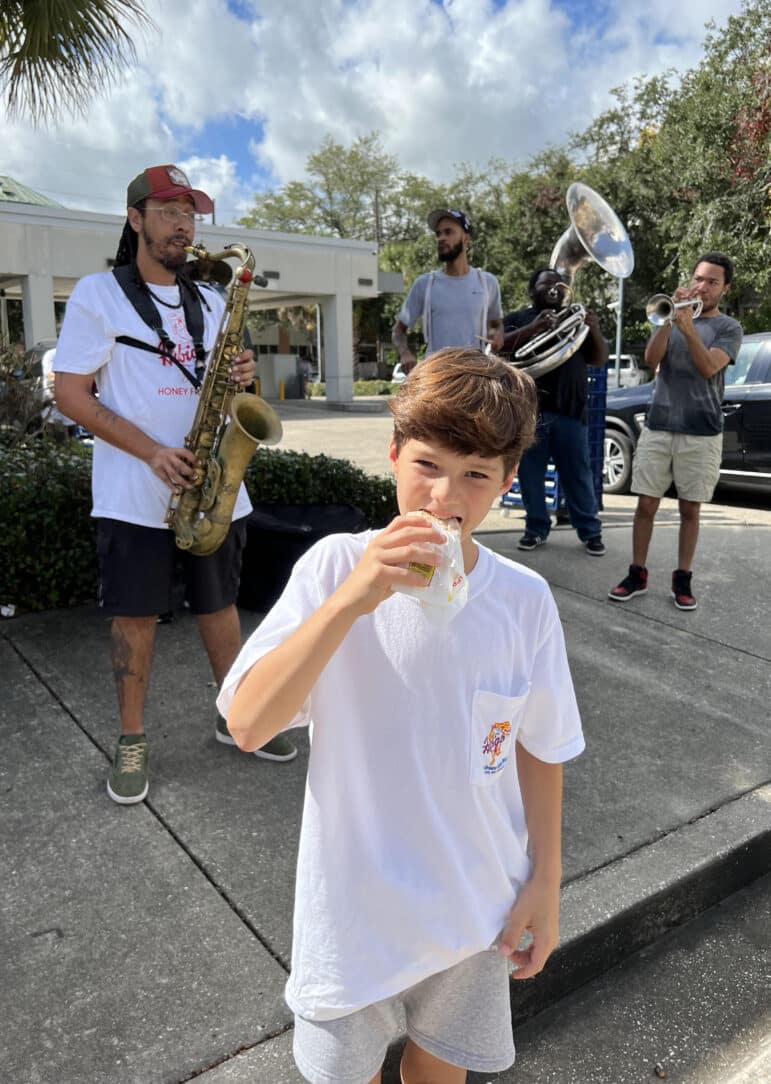 Hubig’s Pies arrived in New Orleans in 1921. The portable treat became a mainstay of local workers —  frequently purchased at hardware stores, corner grocers and po’boy shops across the city.

After the fire at the original Marigny factory closed the business in July 2012, insurance woes and Covid stopped the family from reopening as the city continued to mourn the loss of the iconic packaged hand pie.

Replacement pie-making machinery — stuck in the international supply chain slowdown — finally arrived but had to be augmented to meet Hubig’s specific needs. Luckily, Kwong Lee and his son Henry Lee of Lee Machine Works, who worked on the machinery before the fire, helped refurbish and duplicate equipment.

The worked with Bob Bartlett of Bartlett Engineering and Liberty Welding, which has been fixing and customizing Hubig’s parts for generations. Bob Bartlett and his wife, Carrie, also volunteered to sell pies at the pop-up.

“I am overjoyed to bring Hubig’s pies back to the market,” said Drew Ramsey. “We are thankful for the patience and loyalty of the people of New Orleans and the Gulf Coast. We’ve been on the receiving end of so much goodwill.”

Kathleen Ramsey said they hope to keep up with demand, but for the present, the pies are available in limited quantities. Ramsey advises shopping early in the morning for the pies — before they sell out.

Pies are also available for order at Hubigs.com.