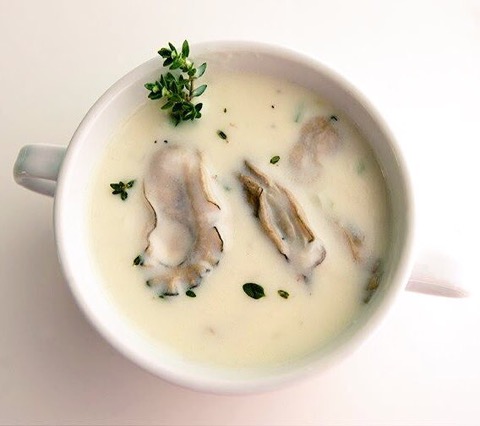 Before and since the Americans purchased New Orleans from the French, New Orleans has remained unique and distinct, nearly 220 years later, we still spurn convention. Thanksgiving is no exception. We celebrate with oysters: Oyster Soup or Stew and Oyster Dressing (you’ll find the recipes below).

Not just oysters, oysters seasoned in whole or in part with our “holy trinity” — bell pepper, onion, and celery, the divine secret of New Orleans’ cuisine and even our Thanksgiving menu. We then double-down and add garlic, green onion, fresh herbs and a dash of cayenne.

Yes, on occasion, we may have to boil our drinking water, read by candlelight or be rescued from the errant pothole — but that’s OK, because we know our food tastes better.

New Orleanians as a whole eschew chicken-broth-flavored stuffing in lieu of a rich, dark, trinity-based Creole oyster dressing. Mashed potatoes are equally outcast; instead, we yearn for long-grain white rice under highly seasoned turkey neck and giblet gravy. Shrimp- and ham-stuffed mirlitons or mirliton dressing may be required by law. Even roast turkey has been replaced with the multi-layered Turducken terrine, although many households serve both.

Where does the Creole Oyster Soup fit in the meal? At the beginning.

A Creole Thanksgiving begins with a slew of oysters or shrimp entrées or appetizers served before the le plat principals or main course arrives. A cup of steaming oyster stew (or soup — the name is interchangeable) is served first.

Some families combine two courses by serving their oyster stew in pastry shells in place of the traditional oyster patty filling (I don’t recommend it). Others serve both oyster soup and oyster patties and split the courses with a small chilled salad or shrimp remoulade. All of this is long before great-grand-mère’s oyster dressing and the mirlitons make their required appearance.

If your Thanksgiving skips the tradition of oyster soup, it can still be found in a few Creole New Orleans’ restaurants that have been family-owned for generations, such as Antione’s during the holidays or Casamento’s.

Casamento’s simple buttery version of freshly shucked oysters poached in a milky seasoned broth has been a favorite of locals for generations — 103 years to be exact — and has been prepared in-house by Joe Casamento’s grandson, Charles Joseph “CJ” Gerdes, for the past 40-some years.

Antoine’s version of oyster stew is richer and more complicated, using cayenne and heavy cream mixed with milk. The dish, now only on special menus, has evolved in the 182 years they’ve served it. Although the stew was already a mainstay in the French Quarter before Antoine’s restaurant began serving it in 1840, it remains one of the oyster dishes for which they, and New Orleans, are famous. 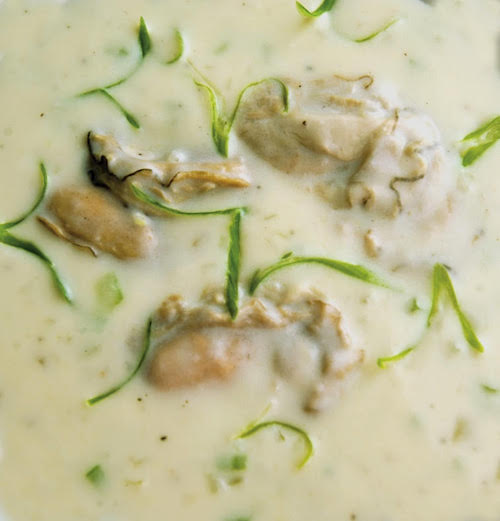 Combine oyster liquor with 1 cup water in a 2-quart saucepan. Bring to a simmer over medium heat. Add the oysters and simmer until their edges just begin to curl, about 2 minutes. Strain oysters through a fine sieve set over a medium bowl. Reserve oysters and cooking liquid separately.

Stir in milk, cream and reserved oysters with their cooking liquid and simmer, stirring occasionally, until just hot, about 5 minutes.

Sauté onion, salt, parsley, and onions until almost translucent, add oysters and cook until oysters edges curl. Add the milk and bring to a soft boil stirring gently. Let cool a few minutes and then serve with Crystal hot sauce.

(recipe from Linda Gerdes and “CJ” Gerdes of Casamento’s) 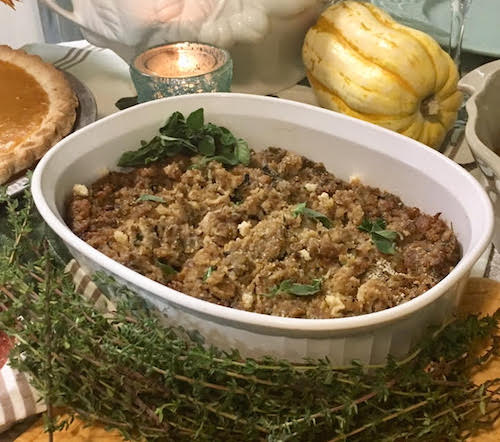 I learned this recipe from the elbow of my Irish Channel cousin Velma. It was her mother’s from the 1800s. (My Great-Grandmother’s Oyster Dressing, also unchanged for 130-plus years, includes the addition of finely minced ground beef or chicken livers.)

Start by buttering a 2-quart casserole dish or baking pan. Put aside. Drain the oysters, reserve every precious drop of the liquid. Cut oysters in half if large.

Sauté the trinity (bell pepper, onions and celery), cayenne and salt in butter and olive oil over medium heat until soft. Next, add the parsley and sauté for another minute. Add minced garlic toward the end, for a modern version.

Add the oyster liquid and stir on low heat for another 4 minutes. Add the oysters, stirring gently with a wooden spoon until the oysters barely begin to curl. Watch carefully and do not fully cook the oysters. They will continue to cook in the oven.

Remove from stove, slowly adding the French bread, remaining seasonings (fresh is best) and egg. Fold into a baking dish, sprinkle with seasoned breadcrumbs, and dot with remaining butter.

Those who would like to include the dish without cooking it can order Oyster Dressing at Langenstein’s, then top with breadcrumbs and butter before baking. Their version is the closest to the Creole original.