More than 500 community members, businesses and nonprofit organizations have joined the NOLA Coalition.

Attorney and current GNO Inc. Chair Richard F. Cortizas believes there are a lot of positive things going on in New Orleans. “Hotel occupancy rates are holding steady and room rates are increasing,” he said earlier this week. “Events at the Morial Convention Center are at about 90% of pre-pandemic levels. The proposed development of the Rubenstein Hotel on Canal Street is an encouraging indicator that folks still want to make an investment in our great city. That’s all extremely promising. New Orleans is headed in the right direction, and we will get there.”

Cortizas is not ignoring the city’s rampant crime. As the 2022 leader of the region’s 10-parish economic development engine, he conceptualized the NOLA Coalition, which — since its emergence in July — is implementing a two-pronged approach to reducing violent crime and creating a more prosperous New Orleans. It is providing support to the New Orleans Police Department while investing in services to support the city’s young people and drive generational change. More than 500 community members, businesses and nonprofit organizations have joined the coalition.

“We are grateful the city’s leadership has taken note that addressing crime needs to be a high priority. Bringing in outside resources, including respected public safety consultant John Linder and former NYPD patrol chief Fausto Pichardo, shows that our leadership understands the importance of putting an emphasis on supporting law enforcement officers and ensuring they have the resources to address the current uptick in crime while balancing in a long-term strategy of investing in youth support services,” Cortizas said.

He sees the New Orleans Recreational Development Commission (NORD) as a great resource for mentoring and supporting youth, and he also praises organizations like Son of a Saint and the Youth Empowerment Project. Funds raised by the Coalition for youth services are being distributed through the United Way. More quality nonprofit organizations like NORD, which can demonstrate a record of success in providing youth services, are needed.

Cortizas credited prominent attorney Kim Boyle and GNO Inc. President Michael Hecht as instrumental in forming the NOLA Coalition and steering the ship. “But the Coalition membership deserves kudos for all their hard work. They’ve shown up and contributed financially and ideologically,” he said. 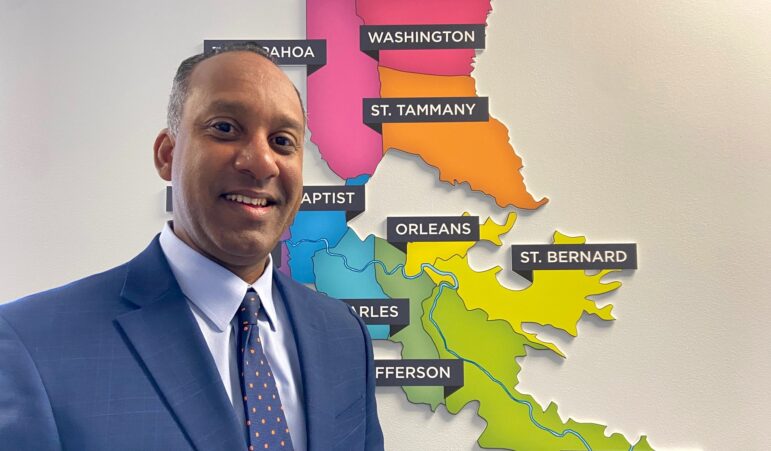 The chief diversity officer and board member of the 350 counselor-strong Jones Walker law firm, Cortizas has the foresight, strength of character, clear vision of the community’s needs and ability to pull together people from different backgrounds to tackle New Orleans’ crime problem.

Born in New Orleans to parents who emigrated from Cuba, Cortizas grew up around his family’s restaurant, Liborio, in the Central Business District. Cortizas would bus tables during summer breaks. “I am very proud of my roots. Liborio’s was the region’s longest operating Cuban restaurant. I never learned to cook professionally, but my parents taught me many life lessons including the value of sacrifice and the hard work involved in owning and operating a small business. I have a lot of respect for the hospitality industry,” said Cortizas who attended DeLaSalle High School, Loyola University and Loyola Law School.

Cortizas spent his elementary years at Lusher (now the Willow School) and, as a parent, led the public charter school’s board of directors. “Lusher gave me a great foundation for my future by offering a highly academic and diverse program with wonderful educators and leaders who became a big part of my life,” he said. Cortizas worked for U.S. Sen. Mary Landrieu, served two high-level stints in city government under different mayors and has enjoyed a successful career in the corporate sector. Those experiences have given Cortizas a unique perspective, enabling him to successfully interact with business and government. “Giving back to New Orleans is important to me,” he said.

Cortizas is pleased that the Coalition has pushed to expedite the construction of the new NOPD lab to integrate the flow of criminal justice information and  help the area’s mental and physical health providers exchange information. “The availability and wise use of technology is of the upmost importance to the success of all our programs,” he said.

In addition, Cortizas praised the City Council for their work, saying: “The council has been an effective listener. I want to give them credit for taking a proactive approach. They continue to keep up pressure, attention and awareness of the priorities heard from the community.” Council President Helena Moreno and Vice President JP Morrell showed initiative on the crime lab. Council members Eugene Green, Freddie King and Lesli Harris spearheaded the crime technology ordinance. Harris also offered legislation on a pay increase and bonus for officers.

“It is unprecedented in New Orleans history that such a broad, diverse group of business and community leaders are working together to reduce violent crime in our city. There is an important role for this organization to play into the near future. We will continue monitoring the progress being made and measure results. We want to see change,” Cortizas said.

“I love this city. I have committed to raising my children here. Jones Walker has extended our lease at Place St. Charles. We want to take a positive, optimistic view about New Orleans’ future,” Cortizas concluded. “We are committed to ensuring the growth and success of the city and urge that others share the same passion. It is my hope and prayer that, within the next five years, New Orleans has an adequate police force and a handle on public safety so that citizens and visitor feel safe. I want us to be a model for public safety reform that other cities will emulate. New Orleans is worth saving.”

IS BOLD’S POLITICAL EMPIRE ON THE EDGE OF EXTINCTION?

Once considered the city’s most powerful political organization, BOLD (Black Organization for Leadership Development) has been suffering an onslaught of negative media reports about its leadership. For decades BOLD was a well-funded powerhouse that wielded power and influence over every state and local election, large or small. Its influence at City Hall was legendary, as were the millions of dollars that came under its leaders’ control from multiple public and private funding sources.

BOLD did not hold its usual political endorsement interviews this election cycle. In years past, every candidate running for public office would attempt to sway the organization’s leaders to endorse him or her over the opponents. They would also agree to pay what some say was always the most expensive pro-rata share of any political group just to be included on the highly sought after signature light green BOLD ballot. The top of the ballot traditionally included photos of BOLD’s board members and any other elected officials who were members, including Peterson, Banks, Badon and state Rep. Candace Newell.

There’s no better example of BOLD’s decline than today’s passionate endorsement by Newell of candidate Donna Glapion. A former interim member of the New Orleans City Council, Glapion is running to unseat Badon as clerk of First City Court. Many pundits believe the endorsement is an obvious indicator that the glory days of the once powerful political machine are coming to an end. Wondering about another round of Covid 19 this winter? Join members of the New Orleans media tonight at Molly’s at the Market, where City Health Department Director Dr. Jennifer Avegno will be serving up brews and conversation. The fun begins at 7 p.m. at 1107 Decatur St.