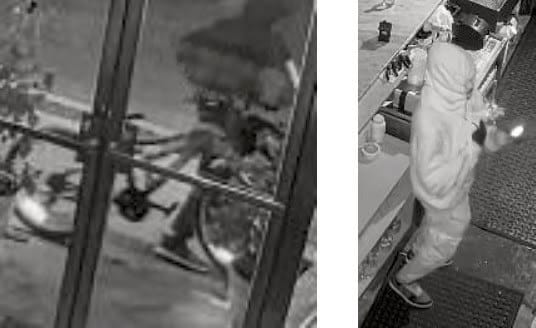 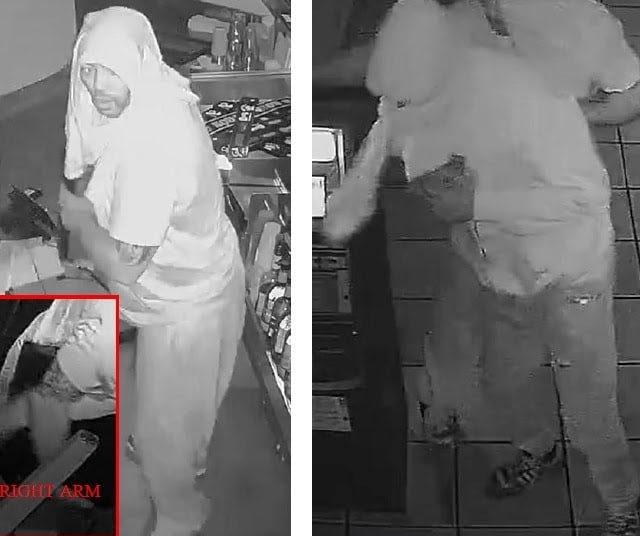 The New Orleans Police Department is requesting the public’s assistance in identifying and locating suspects in two business burglaries that occurred on early on Tuesday (Oct. 4). Police did not indicate that the burglaries were related.

At 2:19 a.m., a man rode up on a bicycle to a business in the 4500 block of Freret Street. After prying open the front door, he walked up to the cash register and tried to open it. When he was unsuccessful, he took the register and a digital tablet.

After putting the register and tablet in his backpack, he rode off on a bike.

The bicycle and the suspect are shown above. Surveillance video of this incident can be viewed here and below.

The suspect in the Freret Street burglary is believed to have a mustache and possibly a beard. His bicycle is believed to be a road-style bike with a thin seat and straight handlebars.

Another business was burglarized a few hours later, at 5:52 a.m., police said. Two men, pictured above, gained access, via a glass door, to the business in the 6200 block of South Miro Street, at a strip mall that faces South Claiborne Avenue, police said.

They took a cash register, a 40-inch television and several bottles of alcohol. The suspects attempted to steal an ATM from the business, but were unsuccessful. They fled in the truck pictured below.

One of the suspects in the Miro Street burglary was seen to have a tattoo near his left bicep.

Anyone with additional information on this incident is urged to contact NOPD Second District detectives at 504-658-6020 or call anonymously to Crimestoppers of Greater New Orleans at 504-822-1111.

This vehicle above was used in a burglary at Miro Street and South Claiborne Avenue.