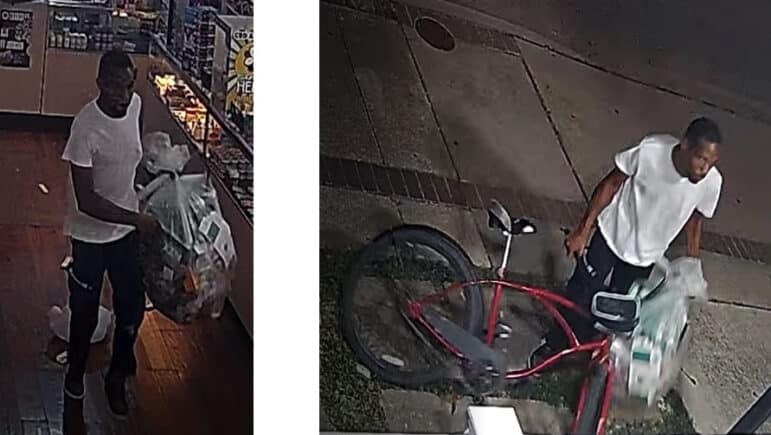 The New Orleans Police Department is requesting the public’s assistance in identifying and locating a suspect in an aggravated burglary that occurred on Sept. 2, in the 4900 block of Freret Street.

At about 9:15 p.m., the man pictured above entered a business and attempted to grab a cash register. An employee tried to stop him, and the two fought.

The burglar then took cartoons of cigarettes, tossed them in a nearby garbage bag and left the store. Surveillance video shows him fleeing the area on a red bicycle.

The suspect, shown above, is described as a Black male, believed to be in his 30s or 40s and about 5-feet 9-inches in height with a short haircut and goatee. He was last seen wearing the pictured clothing — a white T-shirt and dark-colored jeans.

Anyone with additional information on this incident or on the pictured suspect is urged to contact NOPD Second District detectives at 504-658-6020. Those wishing to report information anonymously can do so by calling Crimestoppers of Greater New Orleans at 504-822-1111.