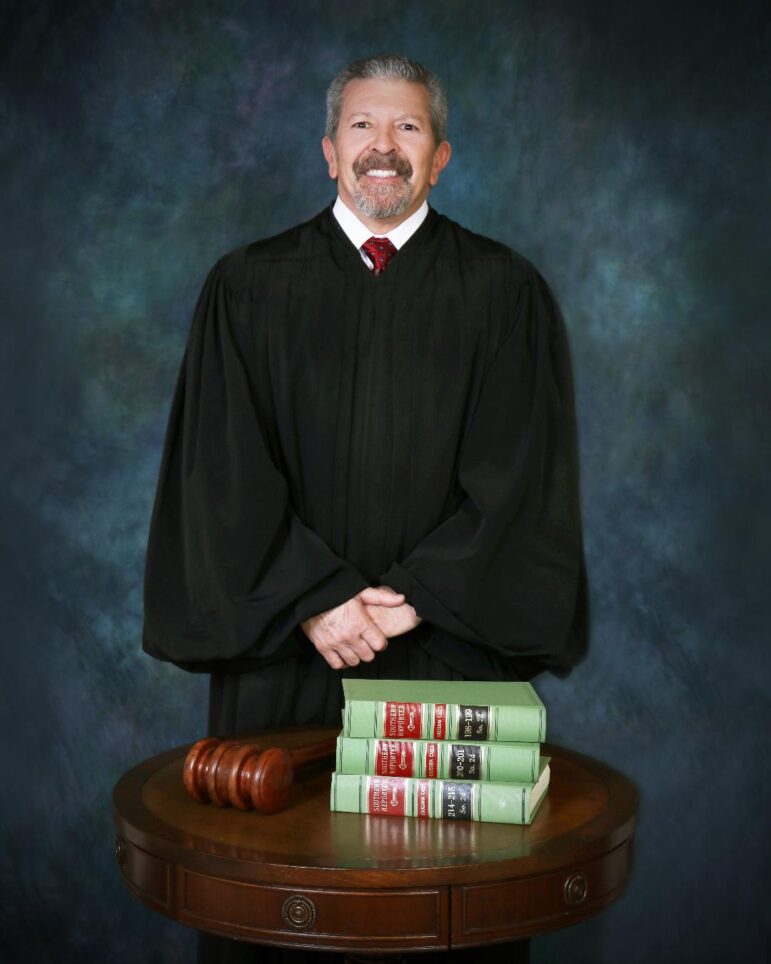 Mark Shea was born on October 22, 1958. Some people might say since the astrological sign for Libras is a scale, it is only fitting that he became a lawyer and eventually a judge. Others, who know the roots of the Shea family in public service, especially the legacy left by Mark’s father, the late Judge John Shea, would say there was never a question about his pursuit of justice. After all, three of the four Shea children are attorneys who practiced with their father in the family law firm. Now Mark’s own daughter, Delaney, is a practicing attorney.

“My family is extremely close knit,” said Mark, “and just as expected of any Irish-Italian family in New Orleans, we argue and debate each other at family gatherings, but all in love.”

Mark grew up in New Orleans East. He graduated from Brother Martin High School, earned a Bachelor’s Degree from Nicholls State University, obtained his law degree from Southern University Law Center, and was admitted to the Louisiana Bar in 1984. 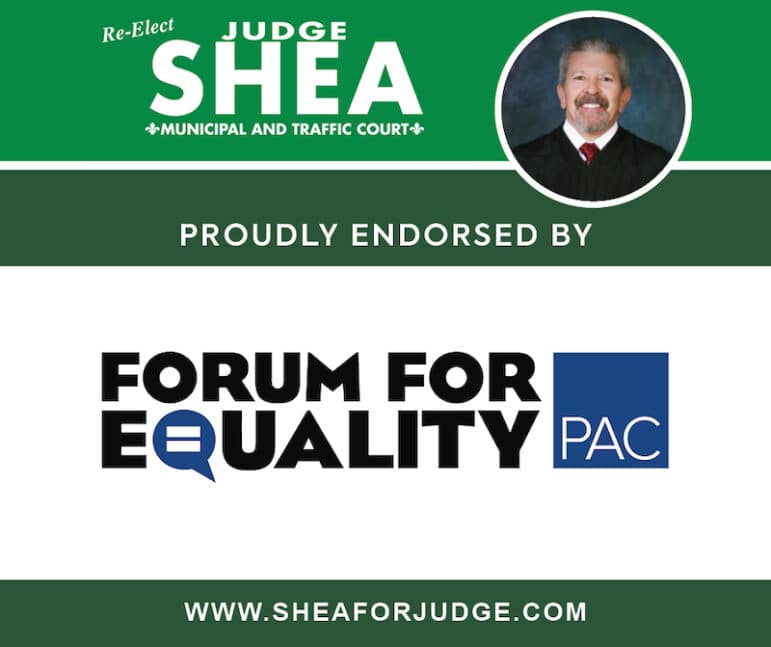 He is proudest of the efficiencies he has introduced to Municipal and Traffic Court, especially after the merger of the two courts. “I have played a leadership role in the merger by reducing the backlog of old cases by more than 50 percent. This has enabled many individuals (for the first time in years) to get a better credit rating, a driver’s license or apply for a job without an old attachment hanging over their heads,” said the Judge.

“Next year, Municipal and Traffic Court will finally implement Online Case Resolution or “virtual court”, a process where defendants, attorneys and judges can resolve cases without leaving the office or home,” said Judge Shea. “It’s the next step to a more efficient court, and is long overdue as courts have faced forced shutdowns due to the pandemic and hurricanes, causing delays in the speedy administration of justice.” 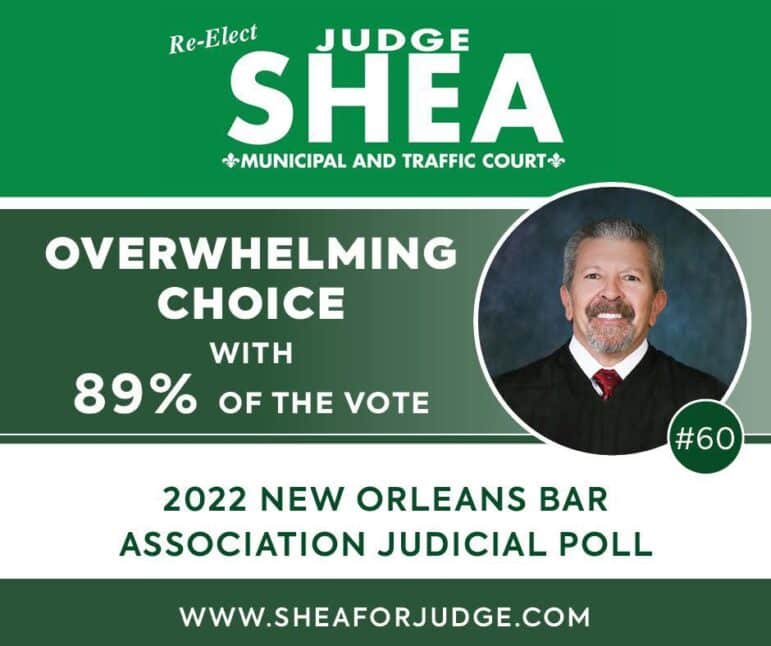 These actions and others undertaken to improve efficiencies and cost-effectiveness in the courts were recently praised by the State Justice Institute as an example of how courts should direct their operational management. This Fall, Municipal and Traffic Court gained a grant to start Community Court providing in-house, wrap-around services to defendants and victims from agencies dedicated to reducing recidivism and decreasing incarcerations.

“Most families when they enter my court are most worried about the problem in front of them: a loved one arrested again for Driving Under the Influence; a situation at home that has turned abusive; getting stuck in the web of human trafficking in order to survive,” said Judge Shea. “They want a judge who is prompt, who can weigh the evidence fairly in application of the law yet be sympathetic and understanding. It is always a balancing act and never easy.” 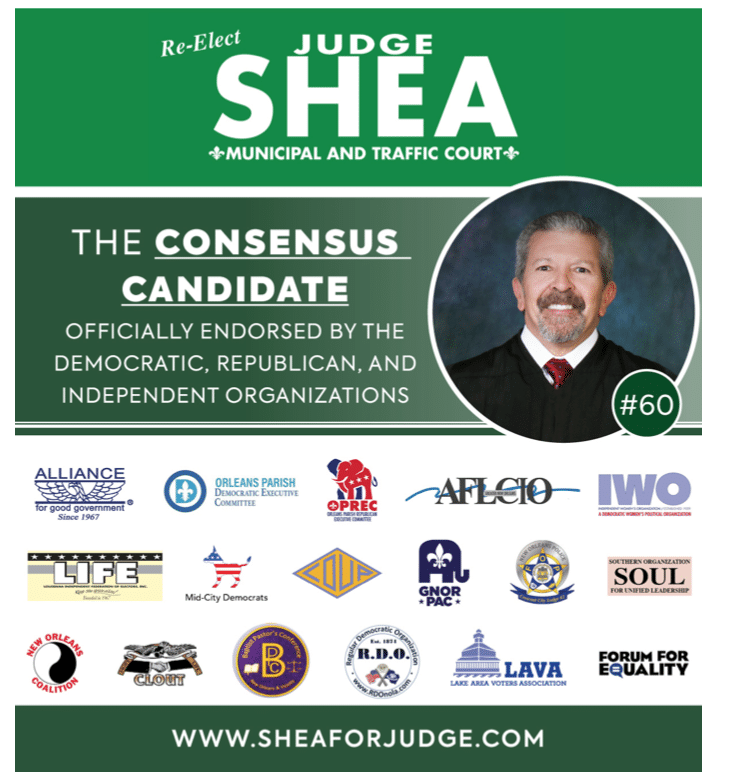 Cynthel Watkins Rambo, the first African American Court Reporter in New Orleans, said, “I have known Judge Mark J. Shea for a very, very long time. He has always been kind, courteous and respectful. Most of all, he respects the “Rule of Law”. Let him continue being a fair and impartial judge. Most of all, let him continue dispensing justice to the citizens of New Orleans.”

Attorney P. Lindsey Williams said, “Lawyers appreciate promptness, professionalism, and fairness. Mark Shea takes the bench on time, runs a courtroom with precision and is courteous to all that appear before him. He is compassionate to the less fortunate among us but also takes action to protect the public.”

Congressman Troy Carter, both Republican and Democratic parties, the Alliance for Good Government, the Forum for Equality, New Orleans Coalition, and the Independent Women’s Organization, among many others, have all endorsed Judge Shea’s re-election to Division D, Municipal and Traffic Court on Tuesday, November 8.

For more information, go to www.sheaforjudge.com.