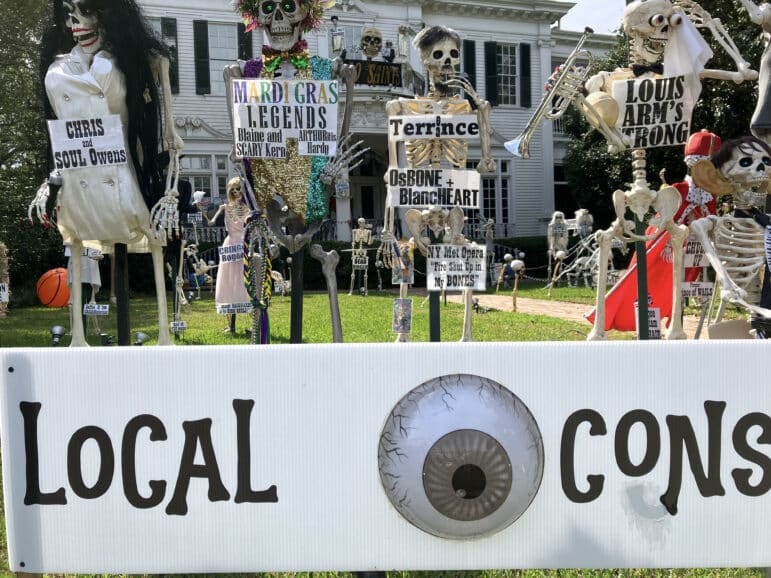 Every year in October, if you ride on St. Charles Avenue in the vicinity of the corner of State Street, you will see crowds gathered at the Skeleton House.

This has become a fixture on the New Orleans Halloween scene. In the front yard – and spilling over onto the sidewalk and up into the trees — are more than 100 skeletons wearing costumes and wonderfully punny labels.

Homeowner Louellen Berger is the brains behind the funny bones, and last year the display came back in full force after the pandemic.

Uptown Messenger caught up with some spectators during a beautiful mid-October day.

Olivia Nolt and her sister, Adrienne Nolt, visiting from Maryland were there among the audience. “I live nearby,” said Olivia, “so of course I had to bring my sister by to see this.” Adrienne added, “I don’t think I could ever see anything like this in Maryland.”

Echoing that thought was Amy Stevens, visiting from Gunnison, Colorado. “I saw this as I was going by on the St. Charles streetcar.” She took the streetcar in the opposite direction to get off to see the extravaganza up close. As the next streetcar was coming and she hurried to catch it, she said “Not only is there nothing like this in Colorado, I don’t think there’s anything like this anywhere.” 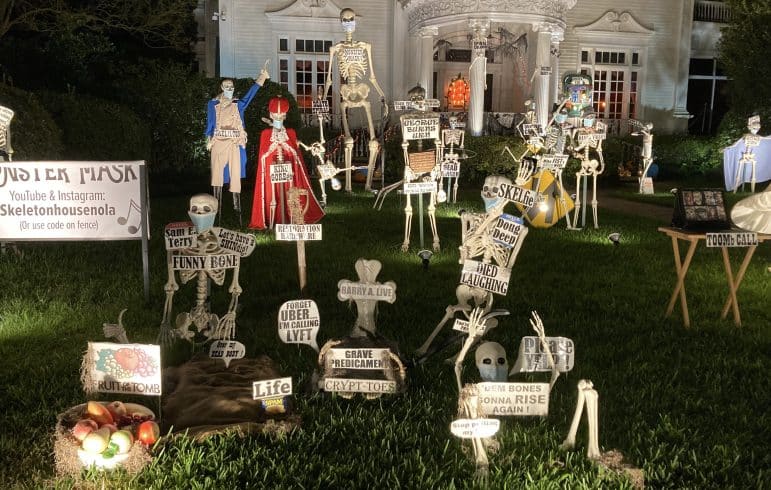 The skeletons rose from their graves for Halloween 2021.

New this year are “Local EYE Cons” with a large eyeball as the “eye.” The tributes include Chris Owens, who died in April; Blaine Kern, who died in the summer of 2020; and Terrance BlancHEART with a note about his Metropolitan Opera history-making debut of “Fire Shut Up in My Bones.” (It should be noted that Mr. Blanchard is very much alive.)

And gracing the outside of the front entrance gate is a skeleton from TerrorBONE Parish, who now lives in Ascension.

There are skeletons in the trees, walking the fence and out onto State Street (“Lying in State”). They are coming out of the ground, twirling and gesturing. The out-of-towners have it right: There really is nothing like this.

And what would a Halloween spectacular skeleton display in New Orleans be without “Go Saints” and Morgus? 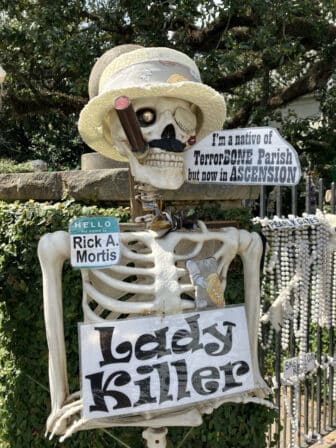 The Skeleton House can be viewed day or night. And there’s no admission charge.