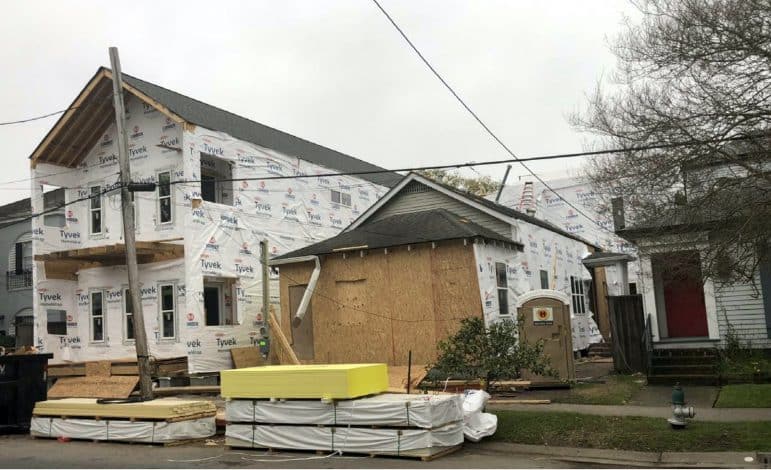 City Council will vote Thursday (Oct. 6) on an interim zoning district that would temporarily expand the area subject to the University Area Off-Street Parking Overlay restrictions.

The proposed interim zoning district would include the Carrollton, Marlyville-Fontainebleau, Broadmoor and Uptown neighborhoods in the restrictions aimed at curbing “doubles to dorms” developments. These private student housing developments are rented by the bedroom.

The University Area Off-Street Parking Overlay, passed in October 2021, addresses the residential density from D2Ds by requiring a permeable off-street parking spot for each bedroom added to a property. It applies to new construction and renovations with more than five bedrooms in residential buildings without a homestead exemption.

The interim zoning district and overlay were both created to address the lack of Uptown parking because of the greater residential density from D2D development.

The proposed interim zoning district would be in effect for a year if passed by City Council. The proposal is sponsored by District A Councilmember Joe Giarrusso and District B Councilmember Lesli Harris.

On Monday (Oct. 3), the Maple Area Residents Inc. (MARI) neighborhood association hosted a community meeting over Zoom in an effort to gauge resident response to the proposal.

Keith Hardie, vice president of the MARI, discussed the issues behind doubles-to-dorms developments and the zoning overlay.

“A few years ago, developers of student housing started a new business model with multiple bedroom suites,” he said. “These developments are much more dense than anything these neighborhoods had really ever seen for the most part.”

Hardie said he hopes to get an even stronger overlay out of the new interim proposal that could help fight more of the problems caused by development.

7520-22 Burthe St. after the conversion from a two-bedroom double.

Many residents at the meeting were in support of the proposal, but shared frustrations that it still didn’t go far enough to address all of the problems with Uptown development.

Melinda Alfonso, an Uptown resident within the proposed zoning district, said her main concern is the trash and litter in her area.

For properties that are modified to house more people in the same building, the number of garbage cans is not required to increase. The city provides regular trash pickup once weekly, a change from twice-a-week pickup that has stayed in effect since Hurricane Ida in August 2021.

“Eight people putting their trash in one can just doesn’t work,” Alfonso said. “We just don’t want to live this way.”

A prolific D2D developer, Preston Tedesco, said in the meeting that he works hard to prevent trash from being an issue for his properties.

“All my tenants know I take the treatment of our neighborhoods very seriously,” he said.

While some residents wanted the restrictions go further, others wanted them to apply to more areas of the city. Uptown resident Hassan Nagandra said that, while he supports the plan, the coverage area of the zoning district was still not large enough.

“My concern is not related to what is about to happen, but more about what is not included,” he said. “Although (Lesli Harris) is a co-sponsor of this measure, a majority of her district is not included.”

Lack of parking has always been a problem Uptown, Tedesco said. While he has increased the number of bedrooms for more than 30 properties in the area, according to Town of Carrollton Watch, he said that hasn’t increased the amount of cars per property as much as many may think.

“There is a big misconception that these kids who move into these properties and every one of them has a car,” he said. “That’s not the case. For every apartment, for every group of students that move in together, one of them has a car because they all know the parking down here sucks. It has always sucked.”

A man who identified himself as a longtime Riverbend resident said that he believes more open communication from all sides about these issues would benefit the community as a whole.

“I think a lot of people in the neighborhood don’t even really understand what’s going on or are even unaware of these IZDs,” he said.

Claire Byun, the land use and policy director for District A, said that those with strong feelings about the proposal should attend the council meeting on Thursday to have an impact on the council’s decision. She also encouraged residents to email Giarrusso at joseph.giarrusso@nola.gov to share their thoughts.

Reporter Jackie Galli can be reached at jegalli@my.loyno.edu.