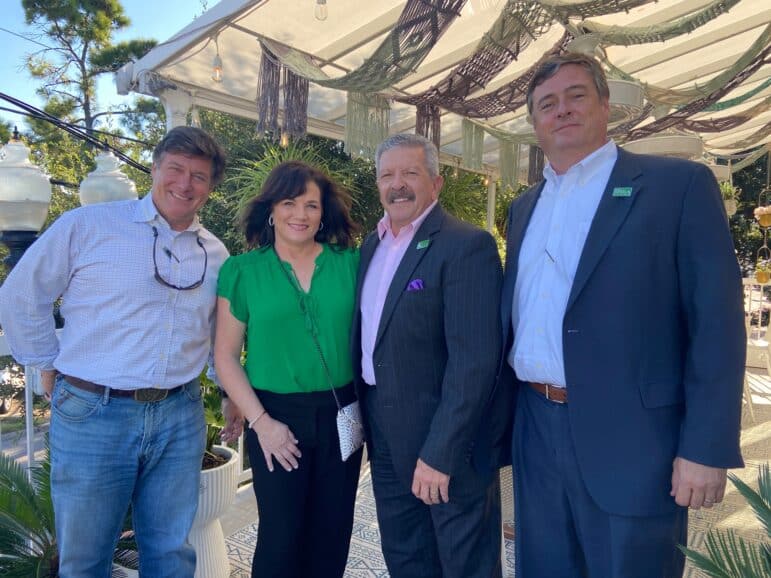 With the mid-term elections less than eight weeks away, political organizations are giving the nod to their preferred candidates. In turn, those endorsements are fueling fundraising for the all-important get-out-the-vote efforts, which will make or break most races. Last night, Municipal Court Judge Mark Shea courted donors at Junior’s in Lakeview, while his opponent Derek Russ entertained his supporters at Bijou on the edge of the French Quarter.

The red hot race between Shea and Russ is a classic example of a well-liked, seasoned elected official being challenged by a younger upstart who has tired of waiting in the wings. Many pundits believe race is a factor in this campaign. As to be expected, Shea has garnered the lion’s share of endorsements, including from the Alliance for Good Government, the AFL-CIO and nine other organizations. U.S. Rep. Troy Carter leads Shea’s long list of support from elected officials, which also includes Mayor LaToya Cantrell, City Council President Helena Moreno and City Council Vice President J.P. Morrell, plus 14 more.

Though Russ doesn’t have Shea’s fundraising and endorsement prowess, he is pushing hard to reach the goal. Russ currently has the support of four organizations, including IDEA (Independent Democratic Electors Association) and the the Independent Women’s Organization (IWO), along with three elected officials: Councilmember Lesli Harris, state Rep. Marcus Bryant and state Rep. Candace Newell. 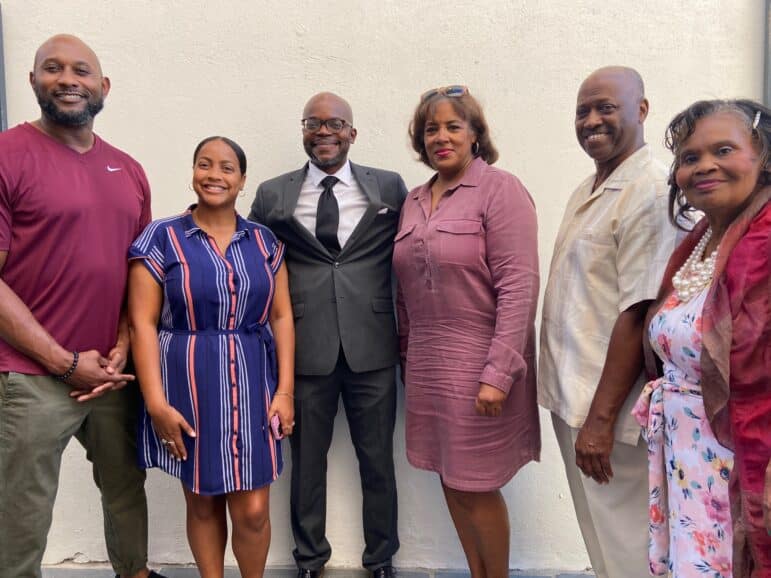 Incumbent Public Service Commissioner Lambert Boissiere III is leading the pack in the contest for the commission’s District 3 seat that he has held for almost 18 years. Though New Orleans voters rarely see or hear from Boissiere, he touts his vast knowledge of complex utilities issues, depth of experience and leadership on the commission, where he currently serves as chair. Boissiere has been endorsed by the Louisiana Democratic Party (as were all the other candidates in the race) in addition to the support of other organizations. Team Boissiere has also announced support from Gov. John Bel Edwards and Congressman Carter with many other endorsements still to come.

Other candidates in the race include Willie Jones, who has good name recognition after having received more than 30% of the vote statewide against Lt. Gov. Billy Nungesser four years ago. Jones has not announced any other endorsements beyond the Louisiana Democratic Party, but he has a great sign campaign underway. The Rev. Gregory Manning is well known for his stands on environmental issues and has developed pockets of support up and down the district. His campaign might have gotten off to a slow start but is now being run by highly organized Jenny Bagert, whose family has a rich political history and connections that could yield financial support. Candidate Jesse Thompson, an engineer, did not provide any information about his campaign.

So far, the real star in the five-man contest is first-time candidate Devante Lewis, who is chock full of youthful enthusiasm. Few New Orleans voters know Lewis. He hails from Lake Charles, was raised by a single mother and works for the nonprofit Louisiana Budget Project. Several groups like the Alliance for Good Government, the Young Democrats of Louisiana and the New Orleans Coalition threw their support behind Lewis, which likely surprised the Boissiere camp.

It’s still too early to tell if Boissiere’s opponents will be able to pull off enough votes to force a runoff.  One thing is for sure: Team Boissiere is prepared to spend whatever money they think is needed for a win in the primary.

The Alliance for Affordable Energy will sponsor a District 3 LPSC candidate forum on Wednesday, Sept. 23, at 6 p.m. at 1879 W. Main Street in Lutcher. The forum will also be broadcast on the Alliance’s Facebook page.

Clerk of First City Court Austin Badon is in the fight of his life against former interim Councilwoman at-large Donna Glapion, who most recently served as chief deputy clerk of the Second City Court. Badon is a popular politician supported by the Alliance for Good Government; BOLD, of which he is a member; and four other groups. Mayor LaToya Cantrell is Badon’s best known ally. She is joined by 10 current elected officials, including Civil District Court Clerk Chelsey Richard Napoleon.

Glapion is the latest member of her family to seek elected office. Her mother, Gail Glapion, served as School Board president. Glapion is the official candidate of the Orleans Parish Democratic Party and has been endorsed by five other organizations, including the IWO. Her support from elected officials is also strong and includes Congressman Carter, District Attorney Jason Williams and seven more elected leaders. On Sept.22, Glapion will hold a fundraiser at the 30°/90° club on Frenchmen Street.

State Reps. Royce Duplessis and Mandie Landry share more than a September birthday — his Sept. 14, and hers Sept. 20. Both are seeking to fill the vacant state Senate District 5 seat. Duplessis has landed support from the Orleans Parish Democratic Party, IWO and three other groups as well as from former state Sen. Diana Bajoie, who previously held the seat. Duplessis is said to have many supporters in the wings just waiting for the right time to announce their endorsement. Duplessis’ advocates have positioned him as the most pro-woman candidate in the race despite the fact that Landry spent years representing the state’s abortion providers and focuses much of her legislation on women’s issues. Landry, the daughter of a plumber and a lawyer for 17 years, has been endorsed by the Alliance for Good Government, the AFL-CIO and Everytown for Gun Safety, a prestigious national organization.

Duplessis is celebrating his 40th birthday Saturday, Sept. 17 at a Block Party with a Purpose, 1701 Oretha Castle Haley Blvd. On Sept. 20, Landry will celebrate morning coffee on her 44th birthday with supporters at French Truck Coffee, 2917 Magazine St., and will enjoy birthday cupcakes and drinks later that evening at The Beaded Oak, 1753 St. Charles Ave.

Two promising lawyers — both with lengthy experience at Municipal and Traffic Court — are vying to fill the Division E seat of retiring Judge Sean Early. Bobbie Smith, thought to have been the early favorite in the race, has racked up the most endorsements from organizations including Orleans Parish Democrats and five more groups. Congressman Carter recently endorsed Smith, as has Councilman Joe Giarrusso and state Rep. Delisha Boyd. Smith will formally kick off his campaign Saturday (Sept. 17) at the Tremé Hideaway.

Attorney Geoff Gates is competing against Smith for the Division E seat. Gates’ parents both devoted their lives to public service. He says he is committed to bringing “professionalism, integrity and leadership” to the court. Gates has also been endorsed by IDEA. His supporters will host a fundraiser Saturday, Sept. 24, at Second Vine Wine.

In the coming weeks, we’ll take a deep dive into the other races. The key to winning — or making the runoff — on Tuesday, Nov. 8, is being on as many sample ballots as possible. Though many local candidates may be cash poor, dollars from the U.S. Senate race and the congressional races will help fund ballots by a number of political organizations.  Look for many citizens who go to the polls on Election Day to be carrying a sample ballot.

Blue-and-white yard signs supporting the petition effort to recall Mayor LaToya Cantrell at now available at petition-signing events. On Friday (Sept. 16), registered voters can sign the petition at the St. Charles Avenue entrance to Audubon Park from 3:30 p.m. until 7 p.m. On Saturday (Sept. 17), the signing campaign moves to The Fly (Riverside Drive behind Audubon Zoo) from 8 a.m. until 2 p.m. The petition drive will also take place in Mid-City on Saturday at the Bayou St. John Music Tree, at Orleans Avenue on the bayou, from noon until 3 p.m.

Campaign organizers request that individuals interested in acquiring a sign make a donation to help underwrite costs through the Venmo app or on the campaign’s website, NoLatoya.org. No cash is accepted at petition-signing locations. Funds raised will be used to purchase radio spots, social media and cover other campaign expenses. Volunteers are also needed to help staff signing events, including Saints games. “We have seven events scheduled for Saturday alone.  We need to train people to help us to ensure that all events go smoothly,” organizer Belden Batiste said.