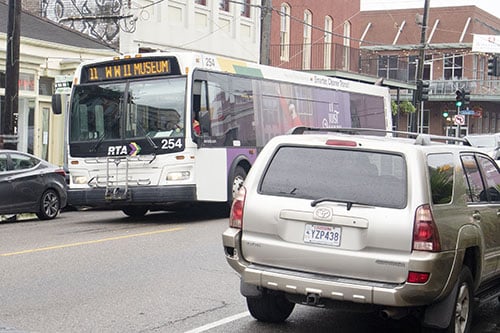 The 11 Magazine bus will run 24 hours under the New Links plan.

The New Orleans Regional Transit Authority will introduce its revamped New Links routes and schedule on Sunday (Sept. 25). To mark the occasion, it is offering a four-day free fare promotion from Sunday to Thursday (Sept. 28).

The free fares will allow riders to adjust to RTA’s bus system redesign with new routes without having to pay for their trips.

As new bus routes debut, riders can board without payment on all RTA buses, streetcars and the Algiers Point-Canal Street ferry during the four-day period. The Chalmette-Lower Algiers ferry is not included in the free fare promotion.

The City Council authorized the resolution by Transportation Chair and District D Councilman Eugene Green on Sept. 15 to implement of RTA’s free fares for the the new network’s debut. The fare suspension was approved by the RTA Board of Commissioners at their August meeting.

The route changes are designed to transform the transit network by connecting more riders to jobs, schools, health care and other necessities with shorter trips and wait times systemwide.

To help achieve these goals, the agency is introducing a system of bus hubs. The central hub is in front of the Main Library on Loyola Avenue in the Central Business District and additional smaller hubs are in New Orleans East, Gentilly Woods, the Cemeteries Transit Center and Wilty Terminal on the West Bank.

As the lead agency in the New Links study from 2019 to 2021, RTA worked closely with the Regional Planning Commission and sister agencies, Jefferson Transit (JeT) and St. Bernard Urban Rapid Transit (SBURT) to reimagine transit within the region.

The two-year study with major public input sought to meet the changing needs of riders. The new bus routes are the final part of the agency’s New Links implementation and the first meaningful network redesign since 2004.

Broad-Napoleon: The former 94 Broad is now the 9 Broad-Napoleon, a high-frequency 24-hour cross-town bus route. The new route extends down Napoleon Avenue to Tchoupitoulas Street. NASA and Village de L’Est are no longer serviced by this route, but it connects to other lines at the Gentilly Woods Hub.

Magazine: The 11 Magazine is now a 24-hour route beginning Sunday. The name remains the same, but there are some route changes. It no longer extends up Magazine to the Audubon Zoo. Instead, the bus turns Jefferson Avenue and takes Tchoupitoulas to Children’s Hospital. Heading downtown, the Magazine bus turns down Poydras Avenue to terminate at the Main Library Hub.

Louisiana: The 27 Louisiana is now scheduled to arrive every 25 minutes from 5 a.m. to 1:30 a.m. the next morning. The route extends down Tchoupitoulas to Walmart. Instead of taking Washington, the bus continues down Toledano to Louisiana.

Leonidas-Gentilly (Carrollton): The 90 Carrollton is now the 31 Leonidas-Gentilly. It runs every 60 minutes from 5 a.m. to midnight. Passengers on the section shared with the 32 Leonidas-Treme can catch the 31 or 32 bus every 30 minutes. The 31 will extend to Children’s Hospital whenever the roadwork and blockades end. Instead of terminating at Elysian Fields, the route extends to the Gentilly Woods Hub so passengers can travel to the Gentilly Woods shopping area and connect with other lines at the Hub.

Paris-Broadmoor: The 52 St. Bernard-Paris Avenue and the 28 Martin Luther King Boulevard have been replaced by the 52 Paris-Broadmoor. The new cross-town route runs every half hour from 5 a.m. to midnight and connects to other routes at the Main Library Hub. The 52 bus provides service to the University of New Orleans and to Xavier University and Hollygrove. It adds service along Earhart Boulevard.

Paris-Claiborne Owl: The 53 Paris-Claiborne Owl crosstown bus only comes out at night, running every 30 minutes from midnight to 5 a.m. The new route connects to 24-hour routes at the Main Library Hub. It replaces the overnight rides of the 16 South Claiborne and the 52 St. Bernard-Paris.

Franklin-Freret: The 57 Franklin-Freret replaces the 57 Franklin and the 15 Freret. The new cross-town route connects to SUNO, the Lakefront Arena, Tulane and Loyola universities, and the Main Library Hub. Following the end of roadwork, the route will extend to the zoo. It also serves North Claiborne from Franklin Avenue to Orleans Avenue.

For more information, riders can visit norta.com/September25 or call Rideline at 504-248-3900. Riders can also receive Information via text by texting RTAUpdates to 41411. 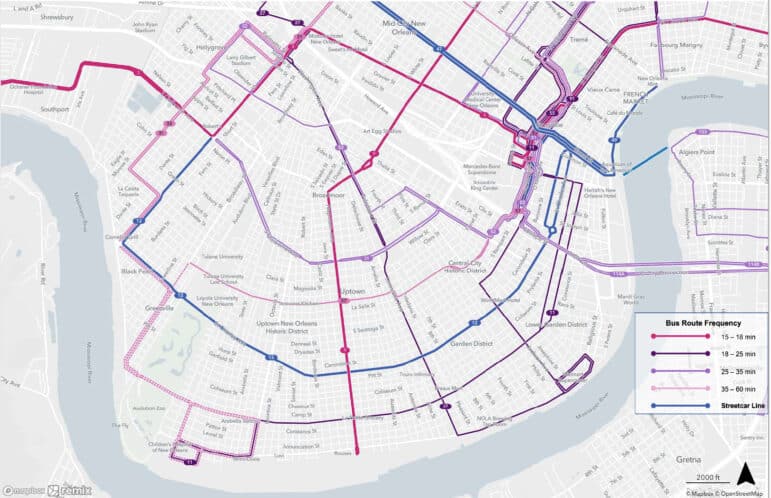 New Links route map for Uptown. Click here for a PDF of the map.

One thought on “New bus routes debut on Sunday, along with four days of free rides”