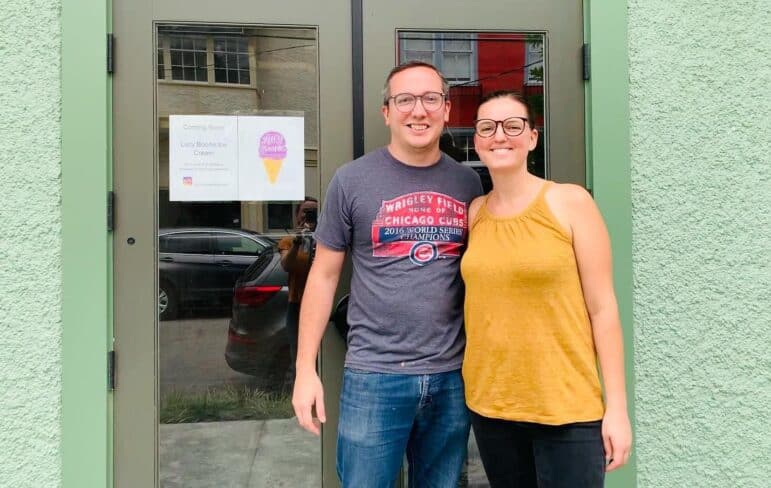 Abby Boone and Aaron Schnell in front of their Baronne Street shop, set to open soon.

Lucy Boone Ice Cream has been charming New Orleanians with its ice cream pop-up since 2020. Now, Lucy Boone is set to open their brick-and-mortar in the renovated Fine Arts Theater on Baronne Street at Constantinople.

Lucy Boone is the chill creation of Abby Boone and her husband, Aaron Schnell, who named the business is named after their daughter Lucy.

They serve handcrafted concoctions such as Cold Brew, Chocolate Peanut Butter Cup, Key Lime Pie and Salted Butter Caramel. Abby said that she enjoys making ice cream flavors that remind her of her childhood, and she hopes that the flavors resonate with customers and offer a bit of nostalgia in the form of a tasty dessert.

Abby grew up in Iowa and attended Le Cordon Bleu College of Culinary Arts in Minneapolis, Minnesota, where she specialized in pastries. After becoming a pastry chef and working in Tennessee and Chicago, she moved to New Orleans. She took her lifelong passion for ice cream and started her ice cream business during the pandemic.

“I had wanted to start and ice cream business for a very long time,” she said. “Pre-pandemic I had been working on it. I had bought an ice cream machine but I was intimidated to start a business.”

The couple started posting on Instagram that they were making ice cream. Lucy Boone took off from there, starting with home deliveries that eventually lead to markets and pop-ups. 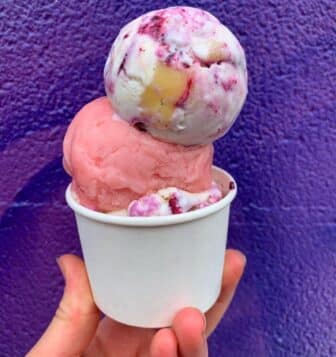 “We did a market at Coffee Science and another one at Coquette,” Boone said. “We’ve been at Port Orleans most consistently over the past few years.”

At Port Orleans, Lucy Boone sells ice cream by the scoop and by the pint, and they plan to pop up there at least twice a week until their brick-and-mortar opens.

Last spring, Lucy Boone popped up at Here Today, on weekends at 1245 Constance St. in a space formerly home to restaurant Thalia. The pop-up, which was run by Coquette owner and chef Michael Stoltzfus, also hosted a fried chicken pop-up by Chef Ana Castro and sold Patron Saint Wine. The building is now home to Lengua Madre, run by chef Ana Castro.

Lucy Boone’s ice cream shop on Baronne will be located in the former home of Fine Arts Theater, a movie theater that operated for 41 years before shuttering in 1958. After the movie theater closed, the building served as a church, a live theater and a warehouse for Martin Wine Cellar.

The space was renovated last year, and Abby and Aaron are excited about their move into the historic building at 3918 Baronne St. in October in a space next to Zee’s Pizzeria.

“There are three commercial units and a few apartments on top,” she said. “Right now, we’re waiting on our permits so that we can start construction. We’re hoping to open there by the end of October.”

Lucy Boone Ice Cream is currently taking a break for the summer but will be back scooping at Port Orleans soon. You can keep an eye on Lucy Boone’s schedule on its Instagram page. 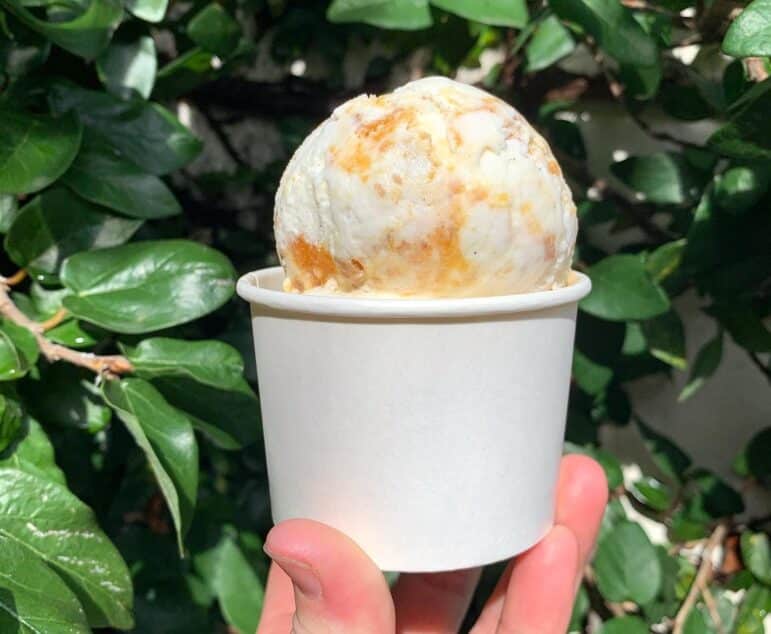