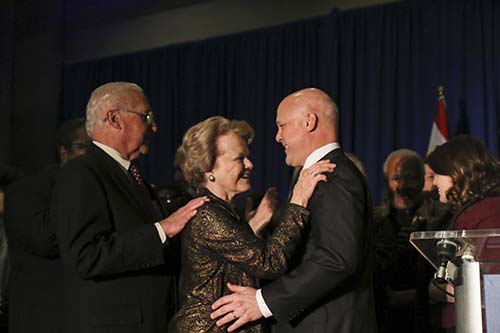 Moon Landrieu, left, with this wife Verna and son Mitch in 2014.

A life-long public servant at the city, state and federal levels, Landrieu was first elected to the state House of Representatives in 1960 before joining the City Council. After two terms as mayor, he served as secretary of Housing and Urban Development in the Carter administration and as a judge on the Louisiana 4th Circuit Court of Appeals.

Landrieu, who grew up in the Carrollton area, is best known for integrating City Hall while leading the city from 1970 to 1978. He also oversaw economic development initiatives that included the planning and construction of the Superdome.

Below is a profile of Landrieu by Uptown Messenger columnist Danae Columbus. It was written in 2015 on the occasion of Landrieu’s 85th birthday, while his son Mitch was mayor and his daughter Mary had recently lost her U.S. Senate seat to Bill Cassidy.

“There was a grocery, meat market and bar room on most every corner so we didn’t venture too far,” he remembered. Without air conditioning, families lived on their porches and the children right there on the street in front of them. “Neighbors knew neighbors,” Landrieu said, until big box retail, air conditioning and cars in every driveway “changed the place.”

Landrieu grew up on Adams near Hickory and Cohn, where his family had a shotgun single. His grandparents lived close by in one half of a double with his aunt and uncle on the other side. “Families lived together, they listened to the radio for entertainment — murder mysteries,” Landrieu laughed.

Since Landrieu attended Jesuit High School, he almost naturally went on to Loyola University, where he quickly embraced the “Jesuit philosophy” of life. “My wife Verna was on the student council, so we became deeply involved in campus activities.” While in law school Landrieu read the book “Careers That Changed the World” and decided to give politics a try in 1959. No one in his family had ever been involved in government.

A baseball star at Loyola, Landrieu figured he had a little name recognition — “minuscule,” he thought. Landrieu was well known in his neighborhood, and it was an open seat. He parlayed his Jesuit connections to get the endorsements of then Mayor Chep Morrison and district Assessor George Degan. “Verna and I went door to door every evening from 5:30 to 8:30 p.m.” His parents babysat with their four kids — Mitch was “in the oven,” born eight months after that first election.

Landrieu speculates that several of his children might have followed him into politics because “the kids grew up accustomed to who their parents knew and met.” Landrieu was “tickled to death” when daughter Mary Landrieu “took the challenge” to seek the legislative seat he had once held. When Mary Landrieu was later elected state treasurer, their “number five” child, Mitch Landrieu, “picked up the idea” of serving in the Legislature. “Mary would have been elected governor without the race card,” he said. The year after that loss, Mary Landrieu won a seat in the U.S. Senate.

Landrieu said he and Verna are a “mixed family” with her ancestors hailing from Italy and England and his probably from France, though he never researched his family’s past. Landrieu said a cousin told him there is a street in Paris called Landrieux, which he thought was the original spelling of the family name.

Landrieu is well known to have had a 60-year relationship with Xavier University President Norman Francis. “Right after I completed my first year of law school, I heard two ‘colored guys’ – Norman Francis and Ben Johnson – had entered the law school. ‘Colored’ was the term being used at the time,” said Landrieu. He shook Francis’ hand that very day and they have been “lifelong friends.” “Our kids are joined at the hip,” Landrieu exclaimed.

Loyola Law School had a club named after St. Thomas More. Landrieu and club president Pascal Calogero arranged for Francis and Johnson to join, over the objections of several other members. When it came time for the club’s annual banquet, Landrieu realized no hotel or restaurant would accept the racially mixed group. “We were facing racism,” Landrieu exclaimed. Instead, he hosted a crawfish boil at his parents’ home and invited all the club members.

Like many Southern matrons at the time, Landrieu’s mother, whom he called “a wonderful woman, not a mean bone in her body,” only knew African-Americans in work-related settings and not socially. Mrs. Landrieu could not help but express her surprise when she realized the African-American man at the door was an invited guest. Landrieu had not told her in advance of Francis’ attendance “for fear she would say no.”

Landrieu said he was “terribly disappointed” when Mary Landrieu was defeated by Bill Cassidy. “We have been in this business a long time. We had no doubt if would be difficult, especially with the national mood and Obama’s ratings in the South,” Landrieu continued. “Mary had a very productive 18 years for Louisiana and the country while she served in the U.S. Senate. The amount of money she brought home was astounding,” he said proudly.

Landrieu believes that son Mitch has done a “fine job” with the city’s recovery. “New Orleans is doing better, almost across the board except for the crime problem, which goes up and down.” Landrieu thinks everyone underestimated how long it would take for the region to recover. “We’re still not fully recovered — look at all the abandoned houses,” he remarked.

‘I’m grateful for my life,” Landrieu concluded. “I hope to have a few good years left and still make a contribution.”

Landrieu leaves behind his wife Verna, four sons, five daughters, 37 grandchildren, 16 great-grandchildren and an indelible legacy on the city of New Orleans. Funeral arrangements are pending.