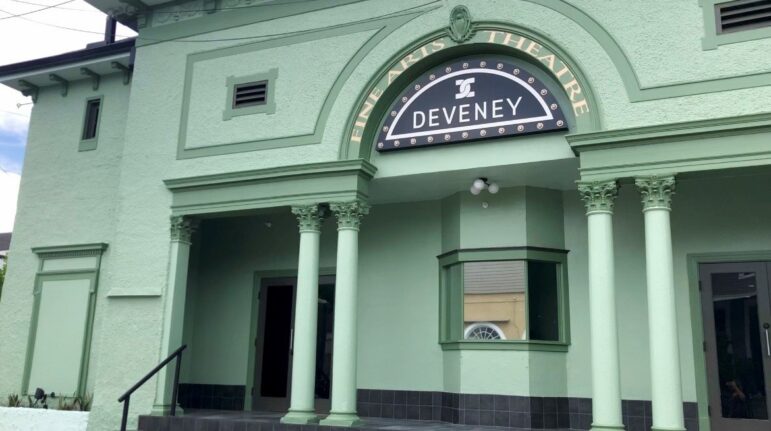 A revival is taking place at a century-old movie house in the Milan neighborhood.

When it began life in 1917, the Fine Arts Theater at Constantinople and Baronne streets anchored a small but thriving neighborhood business corridor.

That was still true in 1946, when Dave Martin opened Martin Wine Cellar a block away. Nearby residents were within walking distance of nearly everything a family might need. There was a pharmacy, barber shop, laundry, tailor, meat market, grocery store and bakery — plus the neighborhood movie theater.

Now the Fine Arts Theater building, a city landmark fresh off of a nearly $2 million redevelopment, holds the promise of revitalizing the small business district.

Zee’s Pizzeria has moved into the Fine Arts building’s row of commercial spaces on Baronne. Beth Biundo Sweets, a bakery, is across the street, and Lucy Boone Ice Cream plans to open a shop next to Zee’s in the Fine Arts. And, of course, Martin Wine & Spirits continues to offer a deli as well as packaged adult beverages.

“I’m thrilled with what’s going on in the neighborhood,” said John Deveney, the owner of the 11,600-square-foot historic building at 1733 Constantinople St. He is in the habit of renovating under-used buildings to create office space for his marketing agency, Deveney.

The agency, now housed in the 4,700-square-foot theater area, has embraced the building’s past. The box office still juts out into the dramatic entrance — between pairs of Corinthian columns, atop a wide stairway and beneath an Italian-style arch — just as it did when neighbors lined up for silent movies and occasional live entertainment.

A projection booth, somehow preserved through the decades, still looks ready to light up the screen with a black-and-white film. Agency employees have named the lobby area where visitors wait the Green Room, and the large shared workspace is the Orchestra Pit.

The building also has four second-story residences in the rear named the Stage Door Residences at the Fine Arts.

“As thrilled as I am about how the building has turned out,” Deveney said, “I am even more excited that this building has another 175 years of life.” 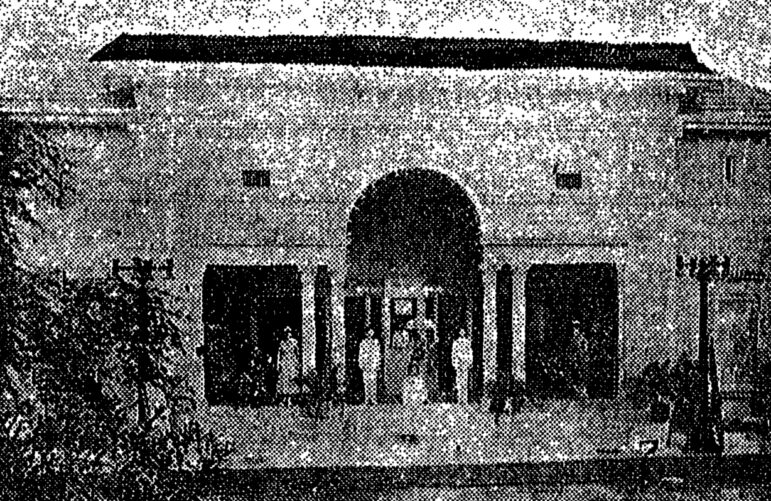 The first employees of the Fine Arts Theater stand at the entrance in a photo that ran in The Times-Picayune on Aug. 26. 1917.

The Fine Arts Theater came to life in the summer of 1917. Its Renaissance Revival design is by local architect Moise Goldstein, whose work includes Temple Sinai on St. Charles Avenue and the Moisant Airport Terminal. The wood-frame building with the stucco façade replaced another theater, the Pastime, on the same corner.

In a 1917 story on the Fine Arts’ opening, The Times-Picayune touted the new theater’s state-of-the-art equipment and conveniences, saying it offered “everything a modern theater should have.” Its first “photoplay,” accompanied by an organ, was “The World Apart” with Wallace Reid and Myrtle Stedman, plus selected comedies.

The Fine Arts was one of more than 100 small New Orleans theaters during its time, according to “There’s One in Your Neighborhood,” a chronicle of bygone New Orleans cinemas by Rene Brunet Jr. and Jack Stewart.

By mid-century, people no longer needed a movie house within walking distance of their home. The Fine Arts closed in 1958.

The screen didn’t come down immediately. It showed movies for another year as the Booker T. Then plays and ballets graced the Fine Arts stage for four years while it was home to the Theater Guild of New Orleans. 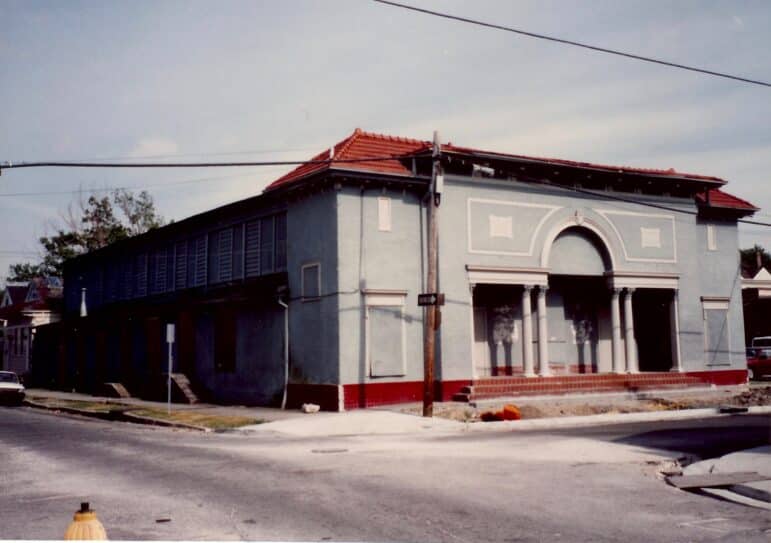 The Fine Arts Theater in 1990, when it was used as a warehouse for Martin Wine Cellar

Beginning in June 1964, that stage became a pulpit. The Pleasant Grove Baptist Church held services at 1733 Constantinople during the 1960s and ‘70s.

By the time the church put it up for sale, Dave Martin needed more room for his holiday gift-basket business and purchased the building. For the next 20 years, the Fine Arts functioned as a warehouse for Martin Wine Cellar.

Martin Wine Cellar leased it out for the TV movie “Kingfish” in 1994. While reporting on the film production, The Times-Picayune’s David Cuthbert walked into the old Fine Arts projection booth, noting that scraps of black-and-white film still littered the floor.

Cuthbert was in the Fine Arts projection booth again in 1999, after local entrepreneurs Helen Morgan and Dennis Preston bought the building from Martin.

They were in the middle of renovating the space for use as a reception hall and dinner-theater, called the Fine Arts Center. They shored up the foundation, repaired some termite damage, landscaped, added a commercial kitchen and painted the exterior a buttery yellow.

They respected the historic architecture, Cuthbert noted, and didn’t touch the projection booth. It still looked as if someone turned off the projector and walked out, he wrote, describing empty film canisters, rusting projection equipment and empty take-up reels littering the space.

Morgan told him she planned to keep it that way as “a kind of museum.” That was how John Deveney found it. “It’s like a time capsule,” he said of the projection booth. 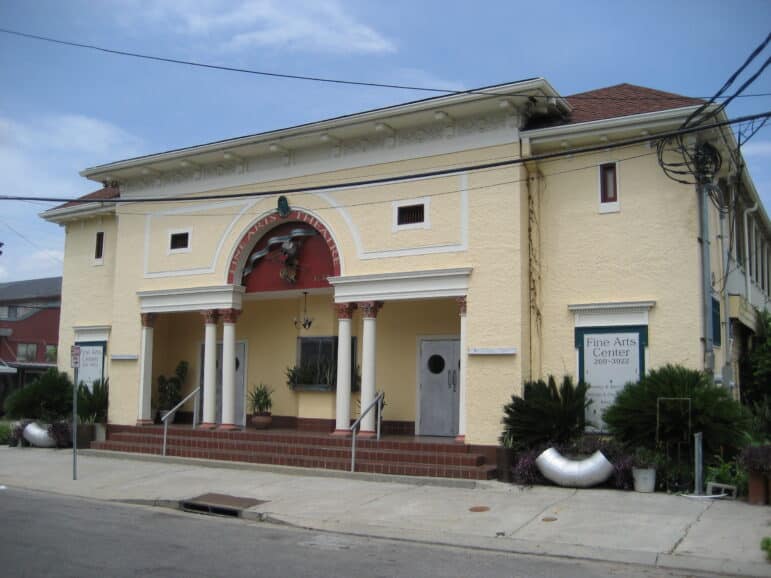 Preston and Morgan held a few performances in the Fine Arts and leased it as an event venue, but business appeared to lag after Hurricane Katrina. They sold the building in 2015.

By 2017, a century after it was built, the Fine Arts was still vacant and blight was settling in. Neighbors told Uptown Messenger they were worried about the rotting wood, overgrown weeds and decrepit balcony on Baronne.

Records show it changed hands a couple of times between 2015 and Deveney’s purchase in February 2020, right before the pandemic brought the world to a halt. Although Covid slowed the construction, Deveney said, the lessons of the pandemic improved the design by changing their perspective on how to configure the space.

“The way that work areas are designed and spaced, the materials and the things that we put in the space were really informed by the latest and best thinking,” he said, “both of Covid sensibilities, but also — you know, we’re a creative business — to maximize making people not just comfortable, but inspired.”

The Deveney agency is joined by other service businesses in the area — a salon, a health care clinic, frame shops and a graphic arts studio — as well the businesses selling pizza, wine, deli sandwiches, pastries and, soon, ice cream.

“I think that our addition on Baronne Street is such a nice complement to what’s already there,” Deveney said. “And it really transforms it into a real commercial corridor. There’s just more reason for people to be in our neighborhood.” 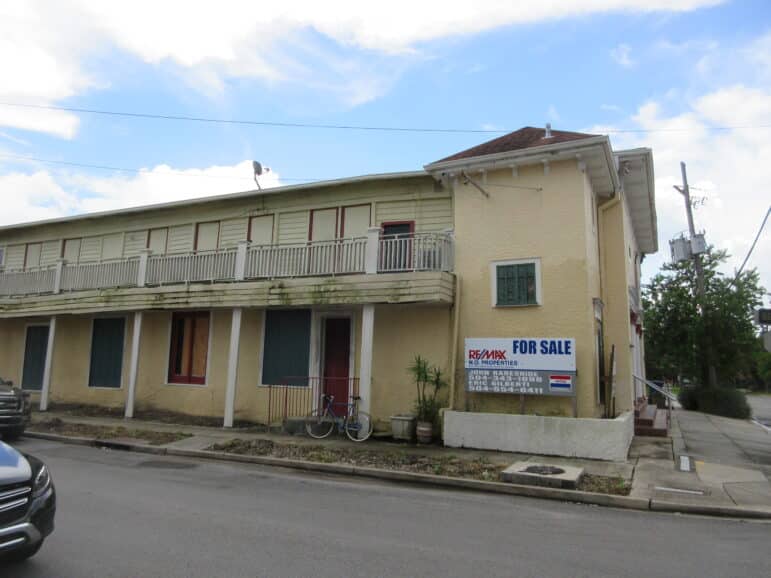 The Baronne Street side of the Fine Arts in 2017