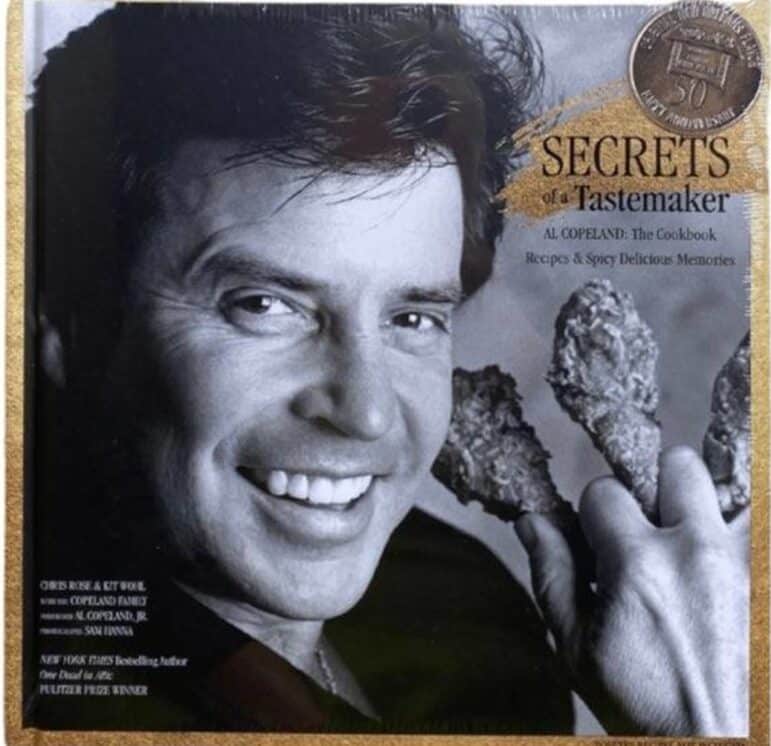 “Secrets of a Tastemaker: Al Copeland The Cookbook” by Chris Rose and Kit Wohl was published Sept. 13 by the Cookbook Studio. The book is a biography of fried chicken magnate Al Copeland Sr. It is also a cookbook packed with some of Copeland’s most famous (and not-so-famous) recipes.

Copeland was the larger-than-life figure behind the Copeland’s restaurant chain and the famed Popeye’s franchise.

Al Copeland Jr., who wrote the book’s forward, and Kit Wohl will be at the Garden District Book Shop on Saturday afternoon (Oct. 1), for a book signing. In addition, Copeland’s culinary team will be serving samples of the book’s recipes, including Blackened Bayou Chicken and Pecan Crust No Bake Cheesecake, from their food truck.

Copeland Jr. spearheaded and guided the book about his father. He brought on Kit Wohl, an award-winning cookbook writer, Uptown denizen and long-time friend of Copeland Sr.

New Orleanians will also be happy to read Chris Rose again. Rose lived Uptown while he was writing for The Times-Picayune. He gained prominence for voicing the city’s frustrations in his Hurricane Katrina columns and book “1 Dead in Attic.”

What:’Secrets of a Tastemaker’ with Kit Wohl and Al Copeland Jr.
When: Saturday, Oct. 1, 1 p.m.
Where: Garden District Book Shop, 2727 Prytania, suite B

The “Secrets of a Tastemaker” book was a long time coming, according to Copeland Jr. The idea formed after the death of Copeland Sr. in 2008.

“When [my father] passed, it was on my mind that I wanted to make a book like this,” he said. “I worked side-by-side with my father for 16 years, and we were very close. I watched how he pursued everything. I got to experience everything with him, and watched him on his journey. For me, it was such an awesome story to be a part of and the public just needed to hear about it.”

Copeland Sr., a high school drop-out, opened his first fried chicken location, Chicken on the Run, in Arabi in 1972. After several months, that venture failed — but he tried again with Popeyes Mighty Good Chicken.

The restaurant found success and was renamed Popeyes Famous Fried Chicken in 1975, A year later, Copeland began opening franchises. Popeyes had 500 locations by 1985.

It wasn’t always smooth sailing, however. In 1991, the company filed for bankruptcy after purchasing the Church’s Chicken chain. Nevertheless, Popeyes was able to carry on and continued expanding. In 2017, Restaurant Brands International announced a deal to buy Popeyes for $1.8 billion. Today, Popeyes has 3,705 restaurants in 46 states and 30 countries.

Compiling the book was a work of love for the junior Copeland, who explored the Copeland’s recipe archive and picked those he thought would be perfect for the book.

“I watched the recipe file get built over the years,” Copeland said. “When it came to the cookbook, we went to the archives and pulled out recipes that I thought would give people a wide view of what we’ve done over the years. Thirteen of the recipes are for dishes still available in various Copeland’s restaurants.”

He said he wanted the recipes to reflect New Orleans flavors and dimensions. Some of Copeland’s favorite recipes in the book are the famous buttermilk biscuits for which Copeland’s restaurant is known. Another recipe that makes Copeland think of home is Black Pot Fried Chicken, courtesy of the LeCompte family, Copeland Jr.’s grandparents.

Other recipes include Crawfish Eggplant Au Gratin, Cajun Duckanoff, Ricochet Catfish, Chocolate Pecan Pie and many more. Photographer Sam Hanna is responsible for the mouth-watering food photos throughout the book that will inspire any home chef to get cooking.

While compiling the book on his father’s life, Copeland Jr. sat down with Rose and Wohl and shared the stories of life with his father. He also arranged interviews with various family members so they could share their own memories of Copeland.

“We grabbed some family members — including some who are now deceased — to be a part of the process,” he said. “My uncle Gil Copeland and others who grew up with him and had some insight and perspective of him. These people got to share the stories about him that they thought were interesting.”

Garden District Book Shop is hosting the book-signing and culinary event on Saturday at 1 p.m.

At the event at Garden District Books, Copeland is excited to serve one of his father’s most popular recipes, Blackened Bayou Chicken. He described it as a rich and flavorful dish that is a staple of the fall menu at Copeland’s locations.

He will also serve Pecan Crust No-Bake Cheesecake, a whipped cheesecake served with a homemade pecan cookie crust, which was part of Copeland’s original 1983 menu.

Readers who want to capture the magic of the Copelands’ kitchen with the help of “Secrets of a Tastemaker,” Copeland said, can purchase Copeland’s hot sauce, biscuit mix and four signature seasonings on the Al Copeland Foundation website.

Most importantly, Copeland wants his father’s legacy to help raise money for cancer research through the Al Copeland Foundation; Al Copeland died of cancer of the salivary glands.

“We want to continue to give back by providing any benefits that we can and help people live a better life,” Copeland said.

If you cannot attend the book event at Garden District Books, Al Copeland, Jr. and Kit Wohl will be at a book signing at Octavia Books in November and the Louisiana Book Festival on Oct. 29 in Baton Rouge.

For more information, check out the Al Copeland Foundation website.