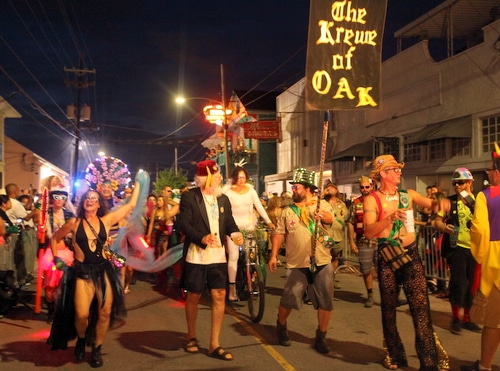 The Krewe of OAK leads the parade through  Carrollton in 2019.

Editor’s note: This report was updated Aug. 25 with a new times for the parade and pre-parade ceremony. The toast is now scheduled for 6:30 p.m. and the parade will start at 7:30 p.m., a half hour earlier than originally announced.

The hottest parade of the year, Mid-Summer Mardi Gras, will light up Oak Street and Carrollton Avenue on Saturday (Aug. 27). The Krewe of Outrageous and Kinky (OAK) is reviving the parade and sweat-soaked bacchanal after a two-year hiatus, with a few changes.

The revelry will start in the 8300 block of Oak Street at around 6 p.m. The crowd will toast the Krewe of OAK royalty from the balcony of the Maple Leaf Bar at 6:30 p.m. before the krewe and band line up with the saucy and satirical subkrewes.

The 34th Mid-Summer Mardi Gras parade will begin at 7:30 p.m. The route is shorter this year, and the krewe is holding a post-parade block party instead of mid-parade party in the former Palmer Park.

If you’re accustomed to catching up with the motley krewes at Marsalis Harmony Park, née Palmer Park, at Claiborne Avenue, you will need to change your ways. Instead go to South Carrollton from Zimpel to Cohn streets to catch the parade — twice.

The parade will turn right from Oak Street onto Carrollton and trek a block up to Zimpel, where it will make a U-turn and head up Carrollton to Cohn, where the bands, dance troupes and krewe members will turn again before heading home to the Oak Street. 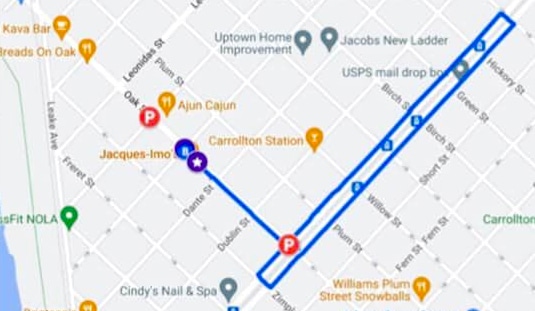 A post-parade block party and street concert will unfold in front of the Maple Leaf, from the 8200 block to the 8400 block of Oak Street..

Expect to see the dance troupes including Muff-a-Lottas, the Jamettes and the Krewe of SLÜT (Sexual Lumberjacks with Ültimate Talents) plus members of the Intergalactic Krewe of Chewbacchus in the parade and enjoying the afterparty.

The theme of the Krewe of OAK’s 34th Mid-Summer Mardi Gras parade is “Let Love Slip Up On Ya” — a nod to the Meters tune “Love Slip Upon Ya” (and a good excuse to wear a slip to the parade).

The Meters reference was likely inspired by bassist George Porter Jr., aka King Robustus XXXIV. Porter was to reign over the 2020 parade along with Queen Annie, krewe member Annie Whitson. We all know what happened that year. 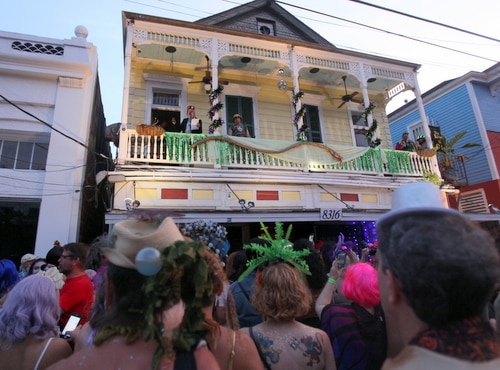 The crowd toasts the Krewe of OAK royalty in 2019.

This year, they will finally get their parade of honor, along with a king and queen who were crowned posthumously. Joe Perez and Chelsea Sullivan, beloved krewe members who died since the 2019 parade, will receive a royal tribute.

King Robustus XXXIV will be busy on Saturday. As George Porter Jr., he will also play inside the Maple Leaf at a party for Krewe of OAK members only, beginning at 11 p.m..

There’s a Secret way for non-members to get a wristband for the exclusive party. The krewe is recruiting folks to join its Secret Service for Mid-Summer Mardi Gras XXXIV. These are the escorts along the parade sidelines who rein in the chaos and keep the parade moving in formation and the paraders safe.

Anyone interested in joining the Krewe of OAK Secret Service is invited to a meeting on Wednesday at 6 p.m. in the Maple Leaf, 8316 Oak St. 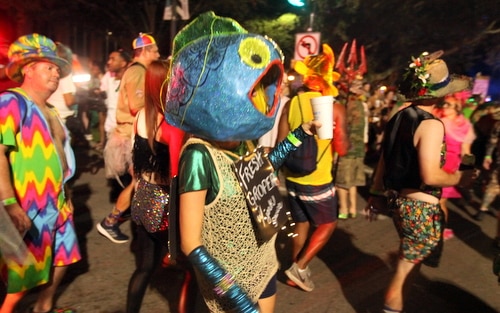