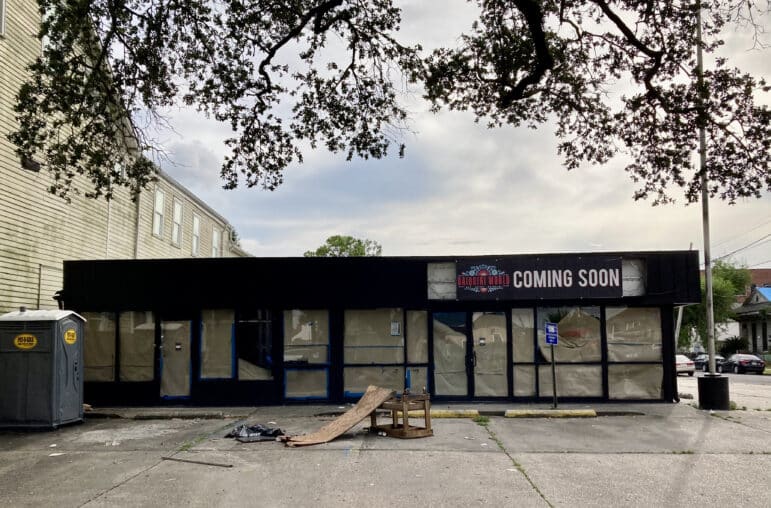 An old Church’s Chicken building on Louisiana Avenue has turned into a battleground for a neighborhood association and a fledgling entrepreneur who is renovating it into a full-service restaurant with alcohol sales.

The Delachaise Neighborhood Association filed an appeal with the Board of Zoning Adjustments to stop work on the building two blocks from St. Charles Avenue. It alleges that the planned Daiquiri World will be a bar disguised as a restaurant and that the layout resembles a fast-food operation.

The BZA staff recommended denying the appeal, stating that the plans show a standard restaurant. But the BZA board said those plans are incomplete and are not stamped by a licensed architect. They voted Aug. 1 to defer the appeal to next month’s meeting.

Daiquiri World is a project of New Orleans native Morgan Walker, a Black entrepreneur and activist who founded Bike n Vote. “Today, my dream and vision to open a restaurant in the neighborhood where I grew up is being compromised,” testified Walker before the board.

She said she wanted to put the vacant building at Louisiana and Baronne, the former home of Sal’s Seafood and more recently a MetroPCS store, back into commerce. The city issued a building permit for the project on May 12.

“Safety & Permits’ position is that they’ve met all the requirements, and while they may have, the operative word is ‘may,’” said DNA President Donna Robertson, who filed the appeal. “Safety & Permits does not have a process in place to vet these types of applications.”

She also noted that Walker failed to state, in response to a question on the Safety & Permits application, that the restaurant is within 300 feet of Cohen College Prep High School. “As the business plans to sell alcohol, DNA finds it very concerning that Safety & Permits does not think this information was important for the application,” Robertson said.

Robertson then went on to describe situations where a business might circumvent zoning ordinances by surreptitiously applying to open a restaurant and then switch the establishment into a barroom. And she said the project represents a change of use and a substantial improvement, requiring additional permits that the city did not issue.

In her rebuttal, restaurateur Walker rallied to defend her business plan. She reiterated that she is opening a restaurant with a permanent built-in hostess stand, table service and a full menu. She also described the full kitchen build-out she is currently trying to finish.

She added that the floor plan would feature a crescent shaped grill where customers would watch cooks prepare food in the same vein as Camellia Grill.

“My building sits on the corner of Louisiana Avenue, not inside the neighborhood — a commercial street with neighboring beauty salons, liquor stores, other restaurants and funeral homes,” Walker said. “This building has been blighted for years with trash and graffiti everywhere. It’s really just a sore thumb, and my investment will only enhance the property values of those around it.”

Eagle Eye Resources via the BZA

Sketch of the proposed interior for Daiquiri World

Not in my neighborhood?

At the hearing, the neighborhood association advanced myriad grievances, including those not covered by city zoning ordinances.

Speaking for the Delachaise Neighborhood Association, Robertson and Helene Barnett  cited numerous reasons why the restaurant should not be allowed to open on the commercial corridor.

These included parking issues, increased crime, distracting nearby high school students from their studies, problems with Daiquiri Place Café in the Lower Garden District and the Jazz Daiquiri Lounge on South Claiborne, and the fact that the business will be named after an alcoholic beverage.

“You have the opportunity and the ability to ensure that Cohen High School students will not collide with Daiquiri World customers and inexpensive high-octane alcohol on a daily basis,” Barnett told the board.

Walker defended the name during the hearing, although the BZA has no jurisdiction over business names. “Our business name is using a staple in New Orleans, ‘daiquiri,’ not to promote a bar but for marketing purposes to draw tourists from off of St. Charles to come into the restaurant,” she said. “We believe ‘daiquiri’ will draw the people in and the food will keep them coming back.” 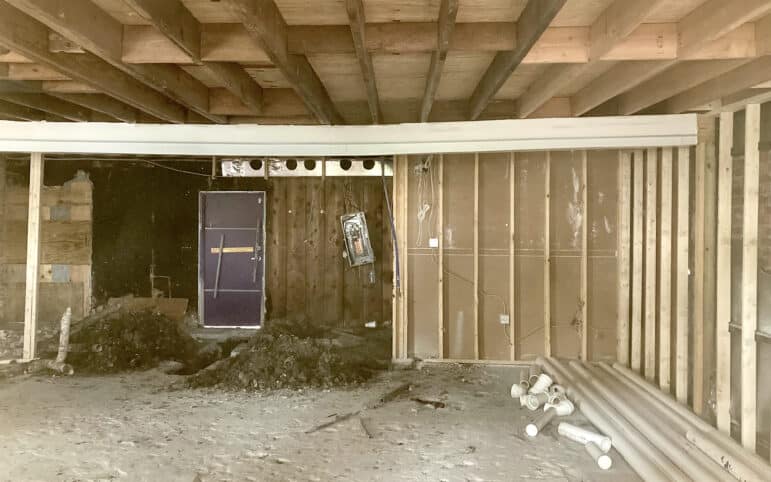 An interior renovation is in progress at the former MetroPCS.

The neighborhood has its say

The response from neighbors appears mixed, even among neighborhood association members.

The BZA received more than 90 emails supporting the appeal and opposing the proposed business. One of those emails came from former City Council member Jay H. Banks, who lives near the Daiquiri World site. He asked the board members to consider whether they would want the establishment near their own home.

“I’m asking that you please do not approve the destruction of our neighborhood,” Banks wrote. “Daiquiri shops have a demonstrated a verifiable history of attracting large crowds of people.” Business owners cannot always control those crowds, he said.

Expressing a concern he regularly voiced while representing District B on the City Council, Banks wrote: “Even if the owners are sincere in their commitment to try, land use matters are not owner related but related to the property. If this is approved and they decide to sell, the next owner may not be as committed to not destroying our quality of life.”

In an interview after the Aug. 1 hearing, Walker said she had gathered over 100 signatures in support of her restaurant from neighbors near the proposed location.

On July 23, the Delachaise Neighborhood Association requested support on Facebook for the stop work order on the restaurant.

“The Delachaise Neighborhood Association (DNA) is appealing the approval by the Safety & Permits Department of the renovation permit for a ‘standard restaurant’ at 1738 Louisiana Street,” reads the Association’s Facebook page.

Three comments are logged, and all are in support of the business.

“I’d rather see investment in the community than look at a rundown dilapidated former Metro PCS building,” wrote Evan Troxell. “This spot is going to have great boiled seafood, po’boys, and drinks. Why the opposition? The city needs tax revenue, not empty store fronts.”

Another member of the DNA Facebook page posted: “I’m all for it, stop this NIMBYism.”

On Nextdoor, there was a vigorous conversation about the restaurant concept, with some posts citing racism as a suspected element at play. 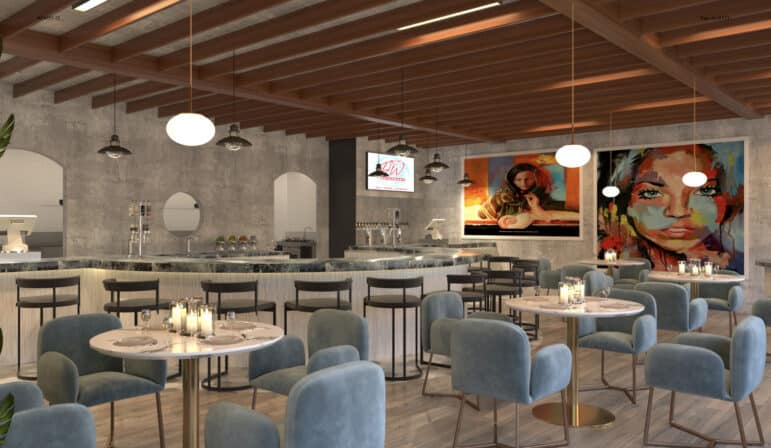 Eagle Eye Resources via the BZA

A rendering of the Daiquiri World interior

Prior to the hearing, Walker and her contractor, Gerald Baptiste, were invited to attend a Delachaise Neighborhood Association meeting at Martin’s Wine Cellar to answer any questions from members.

Many neighbors who voiced dissenting opinions seemed most concerned with the name of the establishment, while Robertson had other issues.

“[The issue] is really the intent behind the business, how it will operate,” said Robertson. “Who will it attract? How will it influence the neighborhood?”

Other neighbors voiced concerns about children being with parents when they ordered food inside the restaurant. A bar being located inside a New Orleans restaurant was also cited as a concern.

Robertson announced at the end of the meeting that, regardless of assurances, she would be filing an appeal to shut the project down.

At the meeting, Walker described the restaurant’s bar area as a place where diners can watch chefs cook. She said the business will comply with the requirements for standard restaurants, including that alcohol sales account for less than half of the average monthly revenue.

Walker said the menu will feature traditional New Orleans fare and appetizers. She emphasized the intended business name does not negate restaurant status.

She expressed that she felt she was put on the spot and was only given two hours’ notice to attend the meeting and defend her business plan to the large room of neighbors at Martin’s Wine Cellar.

Current drafts of the interior show a midcentury modern aesthetic with tables set for dinner. Parts of the interior floor plan are still in flux as Walker and her wife and business partner, attorney Yasha Clark, navigate design ideas.

After the Aug. 1 BZA meeting, Walker said she is pleased with the ruling and will continue to gather support.