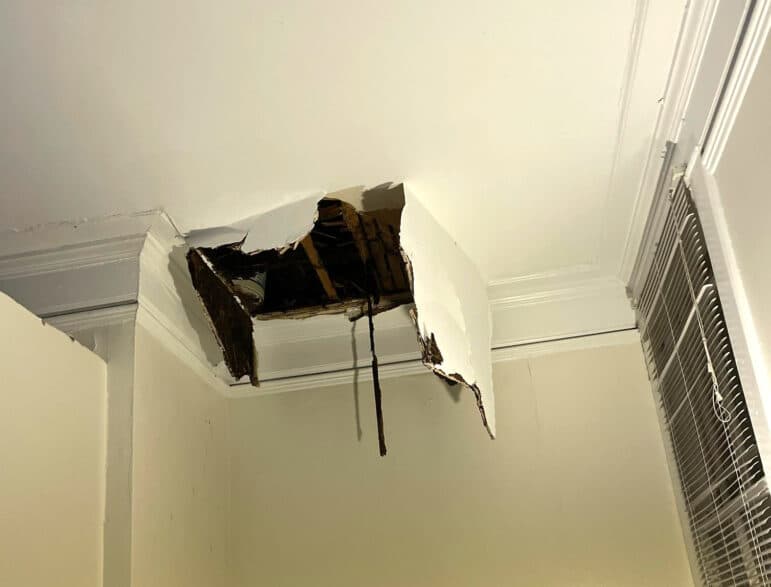 Rain leaking from the roof caused part of the ceiling to collapse in 7800 St. Charles Ave., Apartment B.

“When the city gets rain, so does our bedroom,” Spraggins said.

The hole hadn’t always been there, she said, but rain leaking from the roof caused the collapse on May 31. Spraggins messaged her landlord, Laura Russell, that very day.

Russell responded that she would send someone to look at the damage, according to screenshots of their text communications. Nobody ever came, Spraggins said.

What did come was an eviction notice. Russell began eviction proceedings June 16 to remove the family from Apartment B at 7800 St. Charles Ave., court records show.

Spraggins said she received no communication or warning from Russell after June’s rent was past due, and they were fully paid for the previous months.

Meanwhile, Spraggins said, her health and her sons’ health had been declining since the ceiling collapse.

“My doctor is convinced I am being exposed to black mold,” Spraggins said in July while she, her husband and their two college-age sons were still living in the apartment. “I cannot get through the days without at least one nap. The vertigo and headaches are unbearable. My sons, who have always been healthy and active, are also suffering from headaches and fatigue.” 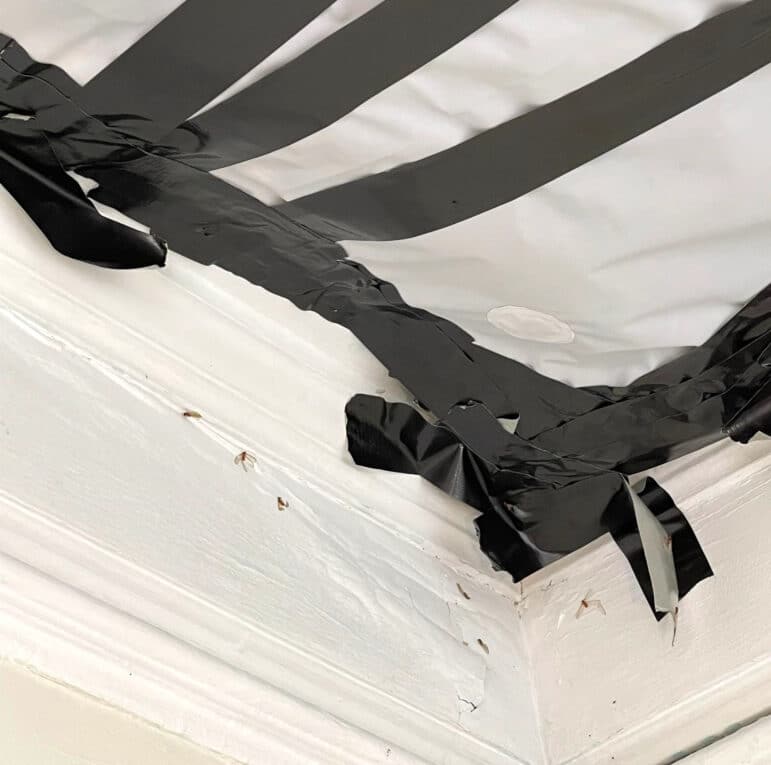 A shower curtain and tape covering the hole in the ceiling keep termites at bay, though some continue to crawl through.

They patched the hole with a shower curtain, she said. The makeshift fix also helped to restrain the termites that began to flood the apartment once the hole appeared.

Spraggins hired RTC of Louisiana to inspect the apartment for mold and other toxins. They inspected the apartment on July 18. Their report found airborne fungal contamination in the apartment and damage from “grossly contaminated” water.

The company said the damaged ceilings, all of the flooring, and the contaminated insulation and drywall should be removed from the front and middle bedrooms. Inspectors also said the whole apartment must be properly cleaned for the mold infestation.

Two days after the mold inspection, Spraggins said, a maintenance man employed by Russell changed the locks to the apartment while they still had legal possession of it. By that time, however, they had already moved to a mold-free apartment. 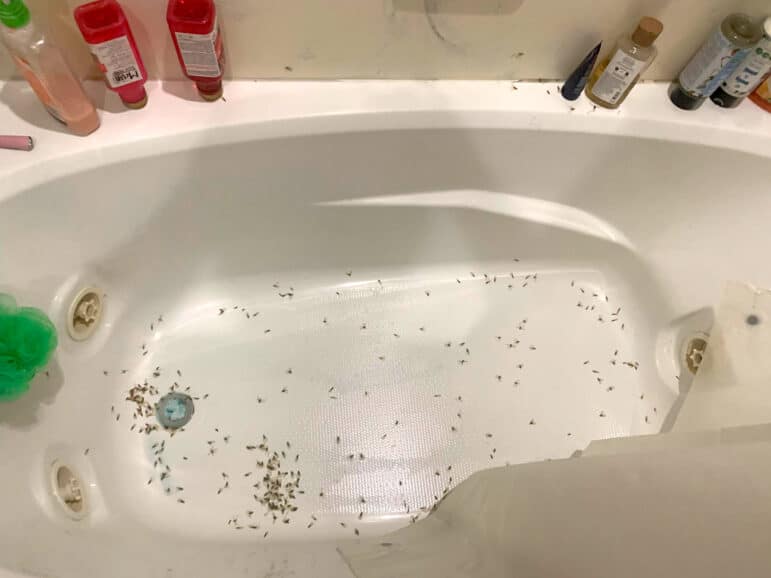 Uptown Messenger made multiple attempts to contact Laura and Howard Russell but received no response.

Spraggins’ experience with Russell isn’t unique. Complaints and legal issues involving the Russells’ practices as landlords go back at least to 2010, when WWL-TV reported on complaints from several of their tenants.

When WWL-TV contacted the Russells in New Jersey, Howard Russell said he was stunned to hear about the complaints and stood by their apartments, adding that they spend “enormous” amounts on repairs and maintenance.

Uptown Messenger reported on Laura and Howard Russell in 2014, when they were charged with code violations at 18 rental properties, totaling $30,000 in fines.

“It’s just not right that they’ve gotten away with this as long as they have,” Spraggins said. “I’ve met former tenants of hers that are in college. Five showed up to support me in court at the first hearing. Through them, I realized I wasn’t alone.”

One New Orleans renter, Savannah Thibodeaux, said she had first heard about Laura Russell through a Facebook group called Bad Landlords NOLA, where “Russell” is a recurring name in posts.

While searching online for a rental, Thibodeaux saw an apartment she liked. After inquiring about the property on May 25, she realized from the email signature the property was owned by Laura Russell.

That’s when Thibodeaux “decided to be honest” and responded back: “hi Laura, I didn’t realize you owned this property. Your reputation precedes you, and I am not interested in renting any housing from you. Best, Savannah.”

“It’s not good for business for your name to be synonymous with ‘slumlord,’” Thibodeaux said. 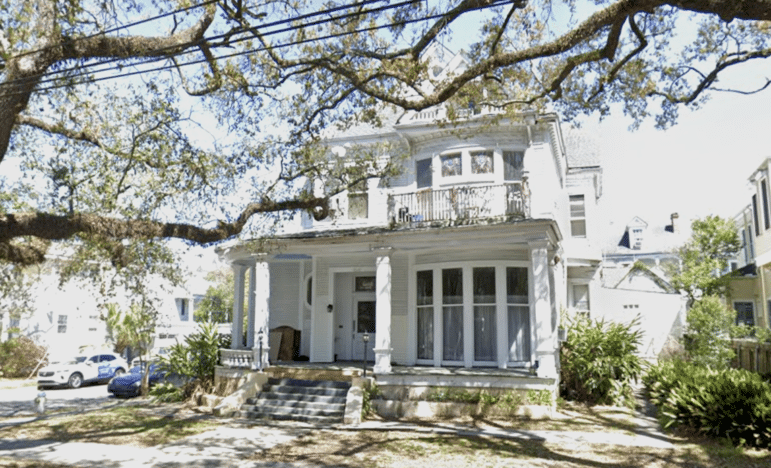 Kellyann Bates rented a Napoleon Avenue apartment from the Russells in 2016 while she was attending the University of New Orleans.

Bates described serious maintenance issues in the apartment: mold, loose tiles, broken light fixtures, infestations and a hole in the wall. She reported the problems to Russell, but nothing was repaired.

“Roaches literally rained down,” Bates said. “It was an extremely hellish experience.”

Bates also said she never received her deposit back and was threatened by Laura Russell.

“She knew that she could prey on poor people, and the fact that an eviction can ruin their life. She told me that on the phone at one point. I was 22 at the time so extremely susceptible,” Bates said in a text message.

Russell demanded an extra $300 cleaning fee after she left, Bates said. “I really had left it in clean condition despite it literally being dilapidated,” she said.

Another issue, Bates said, was that a maintenance worker who did occasionally stop by would make her uncomfortable by making “creepy” comments and entering unannounced.

Bates isn’t the only one with complaints about a maintenance worker employed by the Russells displaying unsettling behavior toward young, female tenants.

Two Loyola students who lived at a Russell apartment on Foucher Street near St. Charles Avenue from May 2021 until May 2022 also received unsettling comments from the maintenance worker, according to Madeline Ritter, one of the students.

Ritter texted Russell about the issue, to which Russell said she would “speak to him” and that “we have never had a complaint before concerning him.”

“I have been told many tenants have received the same message, word for word,” Ritter said.

The discomfort she and her roommate felt added to the problems within the apartment itself.

“I lived from late December until the end of my lease in May without a working AC unit in my room,” she said. “My bedroom and the kitchen would get so hot I would nearly pass out when doing something mildly exerting like vacuuming.”

Several months after telling Russell about the lack of air conditioning, Ritter said, Russell offered to send a repairman.

“Even letting that man into our apartment terrified me as he’d flirted with me while doing another repair before,” she said. “I don’t think anyone should have to choose between letting an abuser into their home with them when alone or living six months without air conditioning. But that was exactly the predicament I was in.”

Despite setting up a time with him over the phone, Ritter said, the air-conditioning repairman never showed. 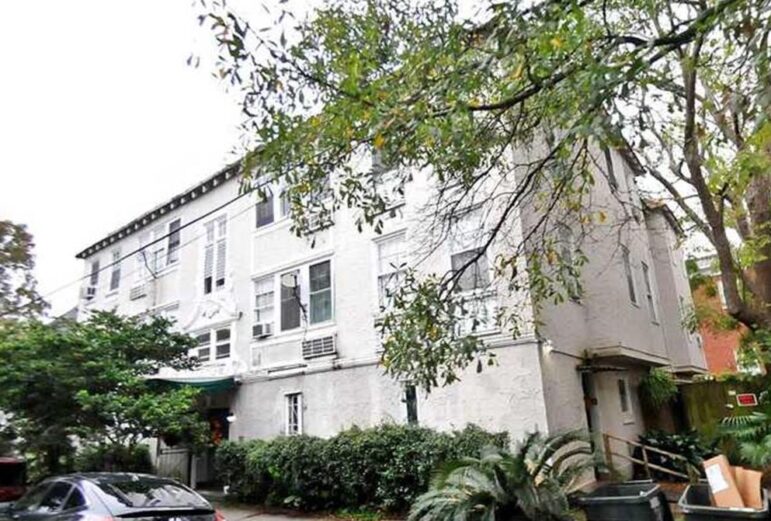 Problems spill into the neighborhood

A current tenant, who asked to remain anonymous for fear of retaliation, described a bathroom ceiling close to caving in, toilets that fail to flush reliably and filthy stairwells in the apartment complex.

“For as much money as it costs to rent this studio, I wish it weren’t a dump,” she said.

A neighbor to one of Russells’ properties said the conditions affect quality of life throughout the surrounding area.

Uptown resident Brenda Sinclair said the grass never gets cut at the Russells’ property. There has been a sewerage issue as well, she said, which caused a horrible smell and a rodent problem.

“She makes promises she never keeps,” Sinclair said of Laura Russell. “Never fixes anything, and the tenants never stay.”

Jessica Spraggins said since moving out of the apartment on St. Charles Avenue, her health has somewhat improved.

“My breathing has gotten much better, but I am still having fatigue, vertigo and headaches,” she said.

She still hasn’t received her $2,400 deposit back, she said. Her former apartment is listed online at an increased rent of $2,700.

“The Russells have a laundry list of victims,” Spraggins said. “They prey on college students, and I have two college-age kids. As a mother, I can’t move on from this situation and just be grateful to be out of it. I want to do my part to help others who have been through the nightmare of renting from the Russells, do what I can to prevent others from going through that nightmare.”

Jackie Galli is a journalism student at Loyola University and a reporting intern at NOLA Messenger. She can be reached at jegalli@my.loyno.edu.

8 thoughts on “Complaints against ‘nightmare’ landlord keep piling up”