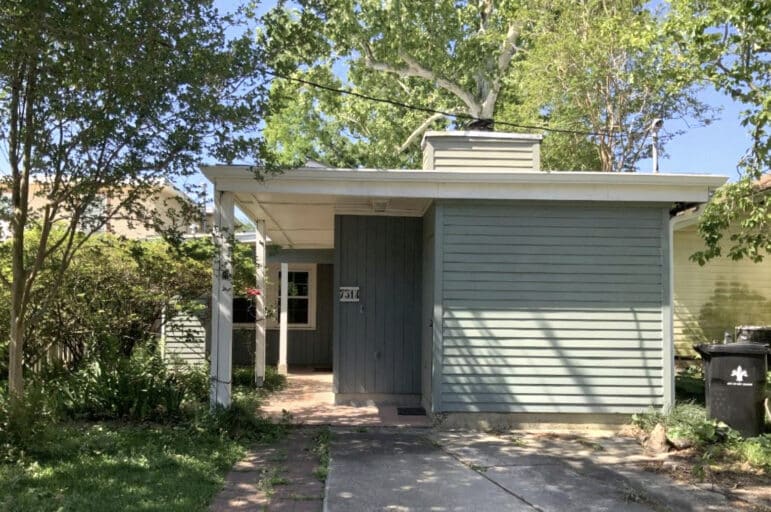 7314 Zimpel St. was purchased by an LLC operated by developers Preston Tedesco and Sam Torres.

The City Council on Thursday (July 21) handed Carrollton area neighbors a victory by overturning the Historic District Landmarks Commission’s approval of plans to partially demolish a house near Tulane University.

The approval would have allowed developers Preston Tedesco and Sidney “Sam” Torres V to add a second story to a 1,359-square-foot single-family home they purchased on Zimpel Street. The plans they filed with the city show two units with a “doubles-to-dorms” layout.

On June 1, the HDLC voted 8-2 to allow the entire roof and 65% of the facade to be demolished so the second floor could be added. The HDLC staff found that the modest mid-century building, rated as “non-contributing,” had nothing to distinguish it. It is not old enough or significant enough to merit protection, according to the staff report.

“The opposition to this proposal is based on concerns regarding the proposed future use and density of the property,” HDLC Deputy Director Eleanor Burke told the council. “The HDLC does not have jurisdiction over use or density.”

Zimpel Street homeowner Robert Turner, who filed the appeal, said he and his neighbors are very concerned about the building’s future use and density. He lives next to the house in the 7300 block of Zimpel, where, if the development is allowed, there would be three de-facto dormitories on his side of the block, he said.

“When my heirs sell my house in perhaps 10 years,” Turner  said, “no family is going to want to buy and live in the middle of 25 or 30 students. By default, my property will also be renovated into high-density student housing, and this blockface will have five student rental units in a row. That is not what the city wants Carrollton to become.”

Student housing, however, is a given in the neighborhood near Tulane, with its 13,000 students, and Loyola University, which has another 4,000. “I don’t oppose student housing,” Turner told Uptown Messenger. “But you don’t want it to be all students. When I moved here, there was a nice mix of some students, some young families and some older retired people.”

Now, he said, the retired people are mostly gone, the young families are moving out and the number of students has multiplied.

The problem with D2Ds, neighbors say, is not just that they increase the number of renters who are more likely to hold raucous parties and less likely to practice proper garbage-can etiquette.

The developers often build additions to one- and two-family residences that can alter the historic appearance of the block. The high-end, high-density conversions squeeze more people into an already tight spot, reducing drainage with the loss of permeable land and straining already frayed New Orleans infrastructure such as roads and sewers.

Opponents also compare D2Ds to the short-term-rental effect of driving out permanent residents and driving up housing costs.

Normally, density goes hand in hand with affordable housing. But with the doubles-to-dorms developments, opponents say, the opposite is true: These developments can drive up prices for both renters and homebuyers who want to live in the neighborhood.

D2Ds are rented by the bedroom, so they can bring in four times what another landlord might get for half a shotgun double. And developers have the resources and incentive to outbid other potential buyers. Tedesco and Torres, for example, paid $25,000 over the $450,000 asking price for 7314 Zimpel, real estate records show.

And there is a less tangible effect attributed to both STRs and D2Ds: the disintegration of the social fabric that’s created when neighbors form bonds.

“Today’s appeal is not about one house,” Turner said at the hearing. “It is about unscrupulous developers in general — and the two city departments that are not doing their duty to protect the fabric and quality of life of our neighborhoods and city.”

Beyond checking off boxes

Turner was referring to the HDLC and the Department of Safety & Permits, he said after the meeting. “I don’t feel that the Historic District Landmarks Commission is looking at the full fabric of the neighborhood and quality of life in the neighborhood,” he said. “I understand why it’s easier for them to simply say, ‘Is this building historic or not?’ But that’s a more limited view of what makes up a neighborhood.”

In comments to the council, Susan Johnson of Town of Carrollton Watch also said that the HDLC needs to consider the tout ensemble, or the overall effect a demolition would have on its block or neighborhood.

Safety & Permits, Turner said, should also go beyond checking off boxes to make sure the information developers supply is accurate. Turner points to the building contract in the files for 7314 Zimpel.

It shows a $142,235 estimate for the construction and renovation of approximately 2,500 square feet, well below average construction costs in New Orleans. A higher recorded cost in relation to the assessed value would have triggered a city requirement that they elevate the slab-on-grade house. 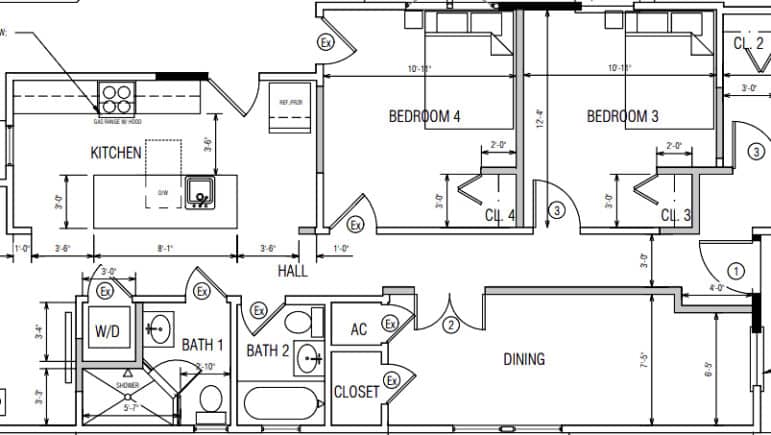 Detail from the plans for 7314 Zimpel St.

The developers said they are contributing to the neighborhood by improving  the properties they purchase.

“I want to build homes that have character and are aesthetically pleasing,” said Torres, the 23-year-old son of celebrity entrepreneur and developer Sidney Torres IV. “And, you know, it’s not the cheapest route nor the easiest route — but we think overall it adds good character to the city and our block.”

HDLC staff members are skilled professionals who spent weeks researching the property, Torres pointed out, urging the council to respect and uphold the commission’s decision. “Having the HDLC approve the demolishment of something is like having the Willy Wonka ticket to the chocolate factory,” Torres said. “It just doesn’t happen.”

Torres’ partner Preston Tedesco, 28, is also from a family of developers and has a longer history investing in the University area. According to the website for Town of Carrollton Watch, a nonprofit that tracks the doubles-to-dorms phenomenon, Tedesco has a part interest in 34 D2D conversions.

In remarks to the City Council, Tedesco told officials they are allowing neighborhood groups to control the narrative to the detriment of developers and business owners. He said he plans to become more active by attending meetings and bringing other developers with him.

“What we’re trying to do is build and create and make the city a better place,” he said.

Consultant Zachary Smith, who headed the city’s Safety & Permits Department from 2018 to 2020, spoke in support of the developers. He repeated previous statements from District A Councilman Joe Giarrusso, who backed Turner’s Zimpel Street appeal, that demolition decisions should be based on data and evidence rather than emotion.

The city’s decision-making process needs to be clear and predictable, Smith said. “Usually when the process breaks down, as in this case, it is clear that the driver of this breakdown is the acceptance of opinions in lieu of facts,” Smith said. “No one today is actually talking about the historical significance of this property. Everyone is worried about a proxy fight to talk about other land-use issues.”

Giarrusso agreed that it is rare for the HDLC to grant a demolition, but he also agreed with Turner that a demolition’s effect on the neighborhood needs to be considered.

University area residents, he said, have been emailing him about creating a full-control historic district, which would require review of nearly any change to a building’s façade. In a partial-control district, only demolitions are reviewed.

“We’ll see how that plays out over the next couple of months,” Giarrusso said.

In a partial control district, half of the roof can be removed without going to the HDLC for approval. The Zimpel Street developers could, for example, camelback their house without interference.

Giarrusso also noted that he will be introducing legislation to further tighten controls on D2D developments.

The council voted unanimously to support the appeal and overturn the HDLC’s decision.