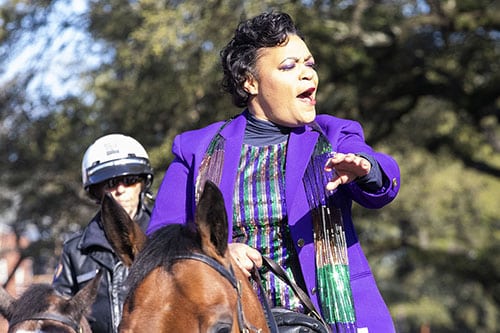 Last night’s report from WDSU-TV that Mayor LaToya Cantrell spent nearly $10,000 on airfare for herself on the recent trip to Switzerland probably surprised more than a few citizens. Cantrell made the trip to celebrate a recent sister-city agreement and attend a jazz festival. WDSU’s investigation further revealed that three staff members — a social media manager, the director of international relations and an individual providing security — also made the trip. Their airfare expenses were in addition to the $10,000.  The total costs for food, lodging and entertainment for this taxpayer-funded junket are not fully known.

The trip to Switzerland was one bookend of her recent European travel, which also included a similar trip to the French Riveria for another sister-city agreement and more music. To Cantrell, both of these trips were all in a day’s work regardless of the costs. She was pleased with the visits, despite being absent during the city’s worst crime wave in decades. Cantrell characterized the trips as an opportunity to expand the cultural footprint that drives the local economy. It didn’t hurt that she was wined, dined and treated like the internationally respected dignitary she aspires to be. Cantrell seems unfazed that City Council at-large members Helena Moreno and J.P. Morrell recently proposed legislation to severely limit non-essential travel expenses.

Cantrell was born into a working-class family. She rode the bus to attend college at Xavier University. She worked as a hotel front-desk clerk to support herself. She found fame after Hurricane Katrina by securing big grants to rebuild her Broadmoor neighborhood. Being elected to the City Council District B and then mayor was like a dream come true.

Many citizens and business leaders across the city have been complaining not only about Cantrell’s travel and entertainment choices but also about her choice of NOPD Chief Shaun Ferguson. Cantrell probably has no intentions of changing her travel plans or her police chief. She doesn’t have to. In fact, Cantrell is scheduled to go to Singapore next for an international conference. Nothing is going to hold Cantrell back. She was re-elected by a comfortable majority of voters. Unless some individual or group is willing to mount a recall campaign that would be tied to the mid-term elections, Cantrell will serve out her term. No one is going to hold her down anymore.

Ain’t no stopping LaToya now — she’s got the groove! (Special thanks to McFadden & Whitehead for recording their 1979 classic. It fits Mayor Cantrell almost perfectly.)

Dress for Success New Orleans is inviting all crafters to join them today (July 28) at 4 p.m. to help “redesign” red dresses that could be worn at the upcoming Red Dress Run.  DFSNO is located at 1700 Josephine St. The entrance is in the parking lot.

Female teachers are also invited to visit DFSNO for a free walk-in personal shopping experience to get ready for the new school year. That event will take place Aug. 1–3 from 10 a.m. until 4 p.m.

One thought on “Viewpoint: No stopping Mayor Cantrell now — she’s on the move”