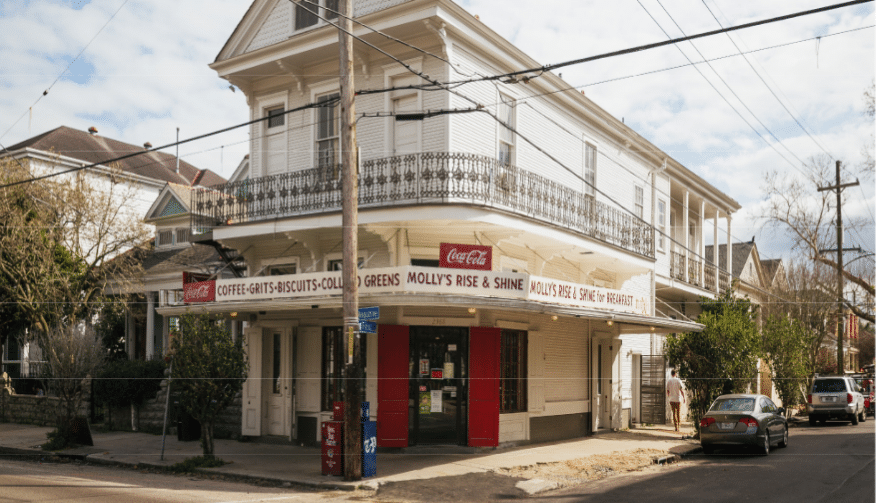 Breakfast and brunch luminary Molly’s Rise and Shine is getting a second chance at a zoning change that will give it the opportunity to add alcohol to its menu.

The City Council on Thursday voted unanimously to direct the City Planning Commission to conduct a public hearing on changing the building’s zoning from residential to business and to permit a conditional use to allow a standard restaurant with alcoholic beverage services.

Three years ago, the same request was shut down in the same chamber after gaining approval, with restrictions, from the Planning Commission. Now a new City Council will have a chance to consider it.

At both 2019 hearings, the proposal faced opposition from the restaurant’s neighbors in the Irish Channel and Garden District.

Molly’s Rise and Shine is on a rare residential section of Magazine Street, and the  residents lined up to tell city officials the popular eatery already intruded on their lives. They did not want to add day drinkers to traffic and parking issues they were contending with.

Mason Hereford — the award-wining chef who operates Molly’s Rise and Shine as well as the nearby Turkey and the Wolf — said he needs a liquor license to pay his workers a living wage and offer health benefits to his salaried employees. A who’s who of local culinary stars lined up to support his request.

The building at Magazine and First streets held the Magazine Street Po-Boy Shop for about 30 years. That family-operated po’boy shop closed when its owner retired in May 2018; the family now leases the building to Hereford.

The po’boy shop attracted a mostly local clientele, with many of its regular patrons walking to pick up their soft-shell crab po’boys and fried okra. Molly’s Rise and Shine is a destination for visitors as well as locals from throughout the metro area.

City Council members in 2019 said that, while they trusted Hereford to run his business responsibly, they feared what could happen if Hereford’s business moved out. The liquor license would remain with the building, and the next operator may not be as responsible.

Then-Councilman Jay Banks told the council in October 2019 that he chose to back his constituents and moved to deny the zoning and conditional use request.

Councilwoman Lesli Harris, who has replaced Banks in the District B seat, sponsored the motion to reinstate Hereford’s request. City Council President Helena Moreno also signed on to the motion.

Harris was absent from last week’s vote. Moreno introduced the measure, and it was passed unanimously by the six members present.

The City Planning Commission has not yet scheduled a hearing on the tandem request.