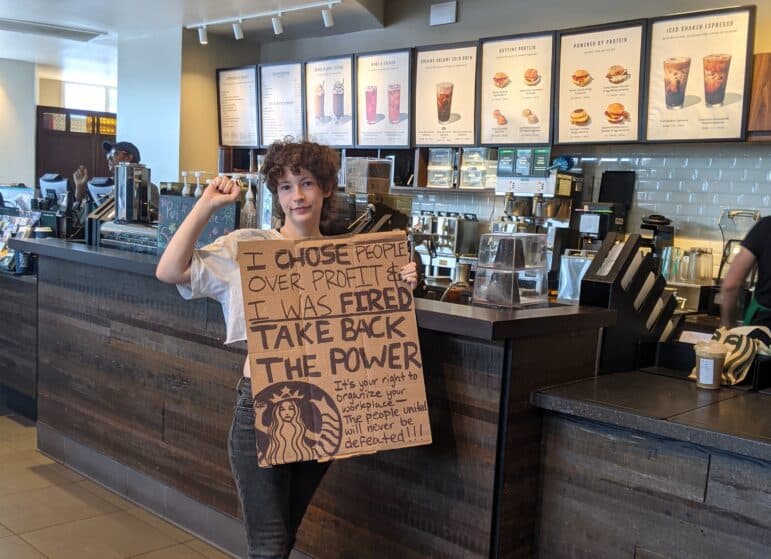 Union organizer Billie Nyx was fired from the Starbucks on Maple Street.

At the Maple Street Starbucks on Thursday morning (June 2), amid patrons with baby strollers and sleek laptops, union organizers and supporters held a “sip in” for the coffeehouse workers. Those workers are holding a union election this Friday and Saturday.

At the sip-in, the organizers invited supporters to sit in the cafe and hold signs for the workers to boost morale in anticipation of the upcoming election. One customer wore a Starbucks Workers United shirt. Attendees sipped iced coffee and mingled, and a few worked on their computers behind signs backing the union.

Since December 2021, when a Buffalo, New York, Starbucks became the first in the country to unionize, workers at more than 100 locations across the country have successfully formed unions, with another 100 upcoming elections filed with the National Labor Relations Board. In some cases, the unions have won by unanimous vote and, recently, workers at three Starbucks have formed unions in South Carolina, the state with the lowest percentage of unionized workers in the country.

If the union vote prevails, the next step is choosing a shop steward and negotiating a contract. This would likely include just-firing clauses to protect workers from being let go arbitrarily.

Though the sip-in was meant to last from 10 a.m. until noon, around 11:30 the attendees were told that they had to cover their signs or leave the Starbucks. The group then stood outside on the patio, but an employee told them that they were not allowed on the property. So they went to the sidewalk while the temperature climbed to 90 degrees before departing around 12:30 p.m.

In the Maple Street location, lead organizer Billie Nyx said, the majority of the store’s employees have come out in favor of the union.

“It’s an in-person vote. When the polls close at 4:30 Saturday, they’re going to count the results and we’ll have the results right then,” Nyx said.

The Maple Street baristas been navigating the election process with legal support from the national union, Starbucks Workers United, which they would join if they win their vote.

“It’s looking pretty solid; I think we’re going to win,” said Nyx, who added that the organizers are putting together a celebration and hope to have a band playing while the votes are tallied. Around 10 workers at the store are eligible to vote in the election.

“The process of organization is the same for almost any industry. It starts with talking to your co-workers about the union, figuring out who supports it, who doesn’t, who’s on the fence,” Nyx said. “Almost everyone I talked to was like ‘Yeah, let’s do a union.’”

However, Nyx was recently fired from Starbucks, a move Nyx believes is based on being highly vocal and visible as an organizer.

In a statement to Eater New Orleans, Starbucks said that Nyx was fired “for closing our location early without business justification and against the direct instructions of two store managers.”

In the election, there are three election observers: one from the NLRB, one from Starbucks and one representing the union. Nyx had been slated as the union observer until yesterday but stepped down on the advice of legal counsel.

Nyx updated Uptown Messenger over the phone on Friday about this development, saying that they had had a “backup plan” and that another union organizer would fill in.

Nyx also cast a ballot, which was immediately challenged by the Starbucks observer on the basis of employment status. Nyx maintains the vote is valid because the election was scheduled before the termination.

The NLRB has filed multiple lawsuits on behalf of Starbucks workers who were fired while engaging in organizing in their workplace. Under federal law, workers cannot be fired on the basis of engaging in union organizing. Nyx recently filed an affidavit with the NLRB.

Against the backdrop of a wave of union victories across the country, Starbucks management has been accused of several union-busting tactics, including threats from management and CEO Howard Schultz’s announcement that new benefits and raises will be extended to employees at thousands of Starbucks stores — specifically excluding those that are forming unions. 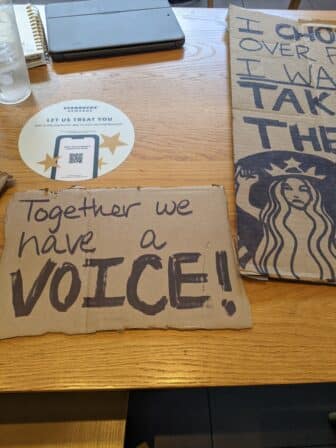 Nyx told Uptown Messenger that there has been an outpouring of community support for unionizing. “It’s been incredible,” said Nyx.

“People think ‘Oh, they [Starbucks employees] already have great benefits,’” said Abbey Lodwig, who came from Mid-City to show support for the workers at the sip-in. “But then it’s interesting to step back and say ‘Why would they be pushing back so hard against unionizing’ if it wasn’t going to benefit the workers in some way.”

Lodwig said that seeing people organizing in the context of the “Goliath” of the world’s largest coffeehouse chain is going to have a “ripple effect” when it comes to workers exercising their power.

“The cost of everything has risen but the cost of labor,” said sip-in attendee Krystal Chambers. Chambers is Nyx’s cousin and “biggest cheerleader.” Chambers said she likes to support small businesses rather than chains.

“I’m really excited about the solidarity,” said Cecelia Paz, who was also sitting at the central table with Nyx and Chambers, surrounded by cardboard signs.