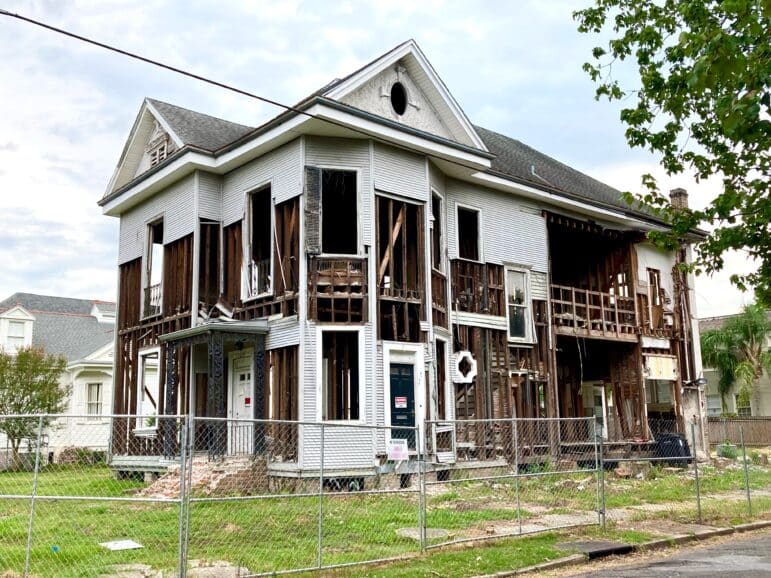 The house on the corner of Webster and Prytania on June 27.

The City Council voted Thursday to allow the demolition of a century-old house in the Uptown historic district, while mandating that the owner retain or restore the façade.

It was  the fifth demolition request for 1230 Webster St. since 2019, after it was put on the market and eventually sold to an Alabama couple. Some requests were withdrawn, others denied.

The Historic District Landmarks Commission has repeatedly opposed the demolition. Now, the HDLC maintains, the house is being slowly and illegally razed.

“The state of the current building is open to the elements, a visual nuisance to the neighborhood, and increasingly vulnerable to deterioration,” HDLC Deputy Director Eleanor Burke told the council.

“This is a direct result of the actions of the current owner,” she continued, “who illegally dismantled it, removed the majority of its interior and exterior architectural elements and details, and continues to maintain the site in an extreme form of demolition by neglect.”

1230 Webster after the partial demolition.

The 2020 real estate listing, before it sold “as is” for $1.595 million, included interior photos showing intact original elements such as pocket doors, sconces, plaster molding and leaded glass windows.

“While it is clear that the current owner has little appreciation for New Orleans historic architecture,” Burke said, “the residents of this city do.”

District B Councilwoman Lesli Harris echoed that sentiment later in the hearing, stating: “What this does is make New Orleans less New Orleans.”

According to District A Councilman Joe Giarrusso, however, the residents of the Uptown neighborhood near Audubon Park have been calling and emailing his office to say they want the building demolished — before a hurricane sends pieces of it flying onto their property or it catches fire in the middle of the night.

Giarrusso noted that the council had unanimously voted to deny the demolition of the same house in 2020.

“To say that I am beyond frustrated that our order was ignored, much like our other orders continue to be ignored, cannot really be perfectly articulated,” Giarrusso said.

The hearing and vote came less than a week after the governor signed House Bill 193 by Rep. Aimee Freeman, whose 98th District includes the Uptown site. The bill, now Act 611, raises the fine for illegal demolitions in New Orleans historic districts, so that property owners may think twice before demolishing a historic building.

It came too late for the house on the corner of Webster and Prytania Street. Here’s a look at how the building got to its current fragile state, as told through city documents.

Nov. 11, 2018: Ownership of the house is transferred to the late Mr. Claverie’s son, Maumus Claverie III, who lives in San Antonio, Texas.

2019: The property is listed for sale by McEnery Residential for $1.595 million. The listing touts the building’s “original pocket doors, hardwood floors, soaring ceilings and rear double gallery” and its location on an oversized corner lot a few blocks from Audubon Park.

Nov. 1, 2019: An application for demolition to grade is submitted to the HDLC. It is then withdrawn before a hearing can be scheduled.

August 2020: A new application is submitted for demolition to grade because “the potential buyers would like to demolish the house to build a new single-family home,” according to the HDLC report. An HDLC inspector finds the building to be in fair condition. 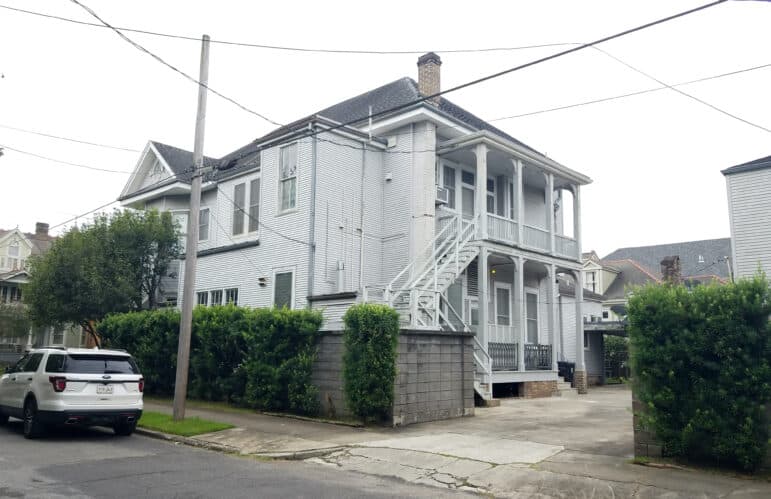 Sept. 2, 2020: The commission denies the request based on the age and condition of the Colonial Revival building, rated as “contributing.” Staff research indicates the building dates to 1904. The decision is appealed to the City Council.

Oct. 15, 2020: At the City Council hearing, attorney Justin Schmidt, representing the owner and prospective owner, discusses an engineer’s report finding “significant deficiencies” in the structure and states that the would-be owners will salvage architectural elements in the tear-down. The HDLC’s Burke says that the council should not let building’s deterioration justify a demolition and that the historic elements are intact. She suggests finding a buyer who will appreciate and rehab the building. The City Council votes unanimously to uphold the HDLC’s decision to deny a demolition.

Dec. 18, 2020: Curt Freudenberger, an orthopedic surgeon from Huntsville, Alabama, purchases the house for the asking price.

April 13, 2021: The HDLC receives an application to move the 5,000-square-foot two-story building to Lacombe, where it would be used to to provide services to New Orleans Mission clients. The application is withdrawn two weeks later. 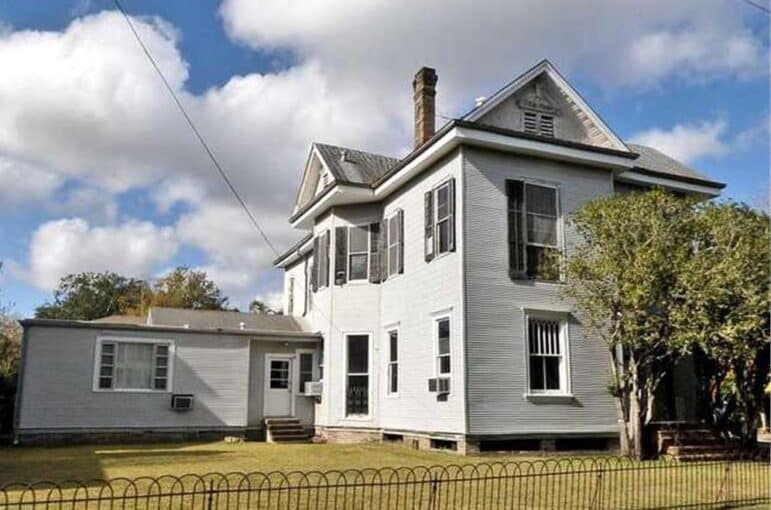 Sept. 18, 2021: Freudenberger submits an application to demolish two mid-century additions described by the HDLC as “unsympathetic.” The HDLC confirms that the plans do not call for full or partial demolition of the original roof, exterior walls or façade. The owner receives a permit to demolish the non-historic sections of the house.

Nov. 19, 2021: In response to complaints that the building is being demolished, HDLC Director Bryan Block conducts a site inspection. He finds that 77% of the historic materials on the primary façade had been destroyed. The HDLC and Safety & Permits post a stop-work order.

Dec. 6, 2021: The owner’s architect, Patrick Melancon, applies for approval of the demolition that has already occurred.

Feb. 2, 2022: HDLC votes to retain the completed partial demolition and to impose a $10,000 fine, the highest allowed under state law. The owner later pays the fine and the stop-work order is lifted.

April 8, 2022: The applicant requests that the HDLC and Safety & Permits inspect the structure. Both departments agree the building will deteriorate more rapidly due to the partial demolition and ongoing neglect; however, it is found not in imminent danger of collapse.

April 21, 2022: Freudenberger asks the commission to consider full demolition of the building in tandem with the submitted request for partial roof and exterior wall demolition.

May 4, 2022: The HDLC votes unanimously to deny the applications for a full or a partial demolition of 1230 Webster. It recommends the building be stabilized to prevent further deterioration. Freudenberger appeals the decision to the City Council.

At the June 23 City Council meeting, Giarrusso said he was forced to choose between a bad and a worse option. He went with the bad option, he said, to avoid further endangering his constituents in nearby homes.

He said he and other council members are working to stop flagrant violations of the city code. One tool will be the new ability to increase fines for illegally demolishing historic buildings. Only the state has the power to increase the fines, which have been capped at $10,000 since the 1970s.

The council is also trying to beef up enforcement within the administration, Giarrusso said. “We are working with Code Enforcement and Safety & Permits on how we can ensure that the laws have more teeth to them,” Giarrusso said, “because I am tired of seeing, both in terms of demolitions and in terms of code enforcement, that people feel as though that they can avoid the law or game the system.”

The council voted 5-1 to allow the demolition while retaining or restoring the front façade. Council President Helena Moreno was absent, and Councilman at-large JP Morrell cast the lone nay vote.

“I will not be voting in favor of the demolition because I am a firm, firm believer in not rewarding bad behavior,” Morrell told council members before the vote.

“And we should not create precedents where people go, ‘Well, wait, I’ve got this really annoying property the HDLC won’t let me demolish, so I’ll go blight my own property so that district council members have to weigh two bad decisions.”

5 thoughts on “New owner of historic home has been trying for years to demolish it. With the council’s reluctant OK, now he can.”