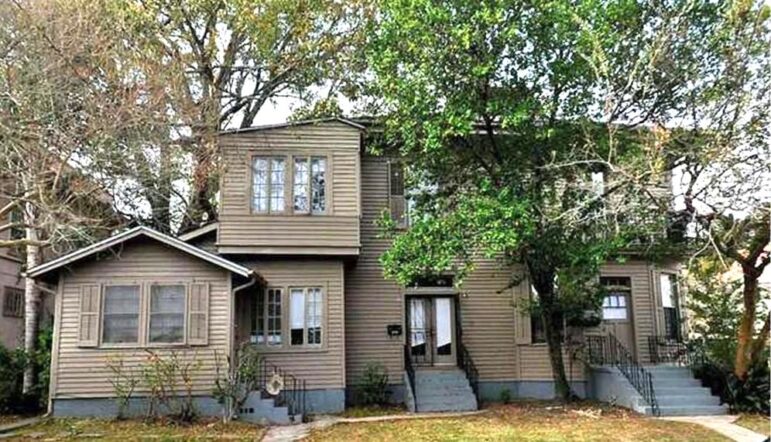 The battle between Uptown residents and developers over doubles-to-dorms conversions continues to play out in municipal hearings over zoning decisions. “Doubles-to-dorms” refers to the conversion of homes intended for families into private dormitory-style housing for college students.

The Board of Zoning Adjustments on June 6 denied two appeals from University area residents who stated the Department of Safety & Permits wrongly issued a zoning determination and a building permit for 636-40 Audubon St., a multi-family building at the corner of Hampson Street.

The first appeal was filed by architect Collette Creppell, a longtime neighbor of the property and a former executive director of the City Planning Commission.

Creppell questioned the validity of the developer’s statements on the building’s previous unit and bedroom count and stated that “going from eleven (claimed) bedrooms to a proposed sixteen bedrooms under an interpretation of Existing Multi-Family is a distortion of the zoning code.”

The BZA staff maintained that unit count, not bedroom count, determines the density of a building and that Safety & Permits’ determination was in line with the Comprehensive Zoning Ordinance. The Board of Zoning Adjustments agreed, voting unanimously to deny the appeal.

In the second appeal, neighbor Keith Hardie objected to the building permit for the rental property that an LLC controlled by developers John P. Hamide and Preston Tedesco purchased from Riverlake Properties in January 2020. The permit was granted by the director of the Department of Safety & Permits to allow the developers to turn 636-40 Audubon from a five-unit, 11-bedroom house into a four-unit, 16-bedroom house.

As enacted on Nov. 18, 2021, the University Area Off-Street Parking Overlay, requires developers within the overlay district to provide an off-street parking space per new bedroom above four bedrooms. After grandfathering in the one-spot deficit the building already had with parking, the developer would need to provide eight spots for its tenants. 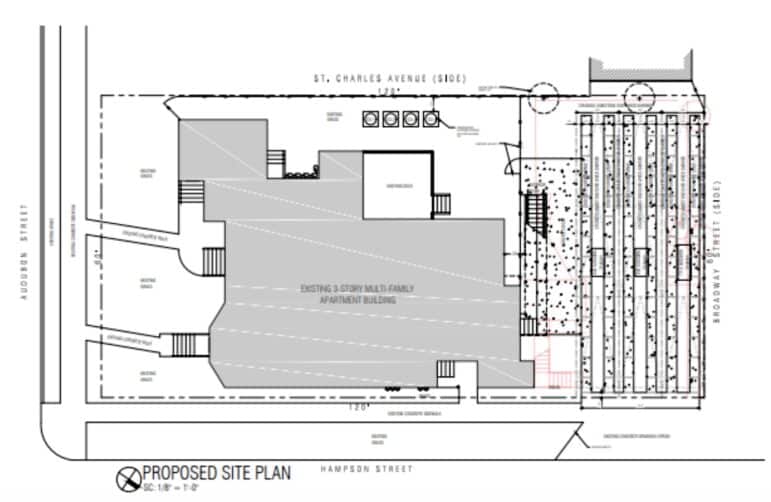 LKHarmon Architects via Board of Zoning Adjustments

Proposed site plan for 636 Audubon, including the parking plan to the right of the building.

Tedesco’s plan provides for nine. However, the spaces would all be tandem parking, in a three-by-three grid. As defined in the Comprehensive Zoning Ordinance, tandem parking is “a parking arrangement where two (2) or more parking spaces are located one behind the other.”

Hardie, who lives a few doors away from the building, said the use of the word “both” calls into question how many parking spaces are actually permitted for tandem parking.

“‘Both’ always applies to two things, not to three or more things,” Hardie said. “If I agree to sell you both of my cars, are you expecting to get three cars?”

If tandem parking for residential purposes is permitted for only two spaces, that would mean there are only six spaces on the lot, Hardie said, and therefore Tedesco had failed to provide the necessary eight spaces.

Beyond the verbiage of the CZO, Hardie also said the parking arrangement is “unworkable.”

“It’s basically a square, a three-by-three tic-tac-toe block. So anybody who parks in that first slot up there is going to have to get two people to come back out in order to get out of that lot,” Hardie said.

Tedesco objected to the appeal, telling the board, “With regards to the parking, I just want to say that with this building and others, it’s been a constant challenge to follow the rules. And I say that because the rules consistently change based on what’s going on in the neighborhood.”

Tedesco said that has made creating plans difficult. “We have had to draw and amend, and draw and amend plans for this building several times in order to follow the rules,” he said.

Hardie said that as an attorney, he understands why the rules are in a constant state of change. “The regulators are always a year or two behind the regulated,” Hardie said.

“That’s what’s going on here is that the city regulations are trying to keep up with the ways that the developers are skirting the rules,” he continued, “and we are not getting the intended effect of our laws.”

Susan Johnson, of Town of Carrollton Watch, a nonprofit that monitors development in the area, spoke in support of the appeal. “I for one will take every opportunity to object to what I see as encroachment by a commercial concern in our residential zoned neighborhoods,” she said.

Commissioner Todd James, who moved to deny the appeal, said, “I do respect where you guys are coming from in terms of the appeal,” adding: “We are stuck with the code, and how it appears before us.”

Jackie Galli is a journalism student at Loyola University and a reporting intern at NOLA Messenger. She can be reached a jegalli@my.loyno.edu.