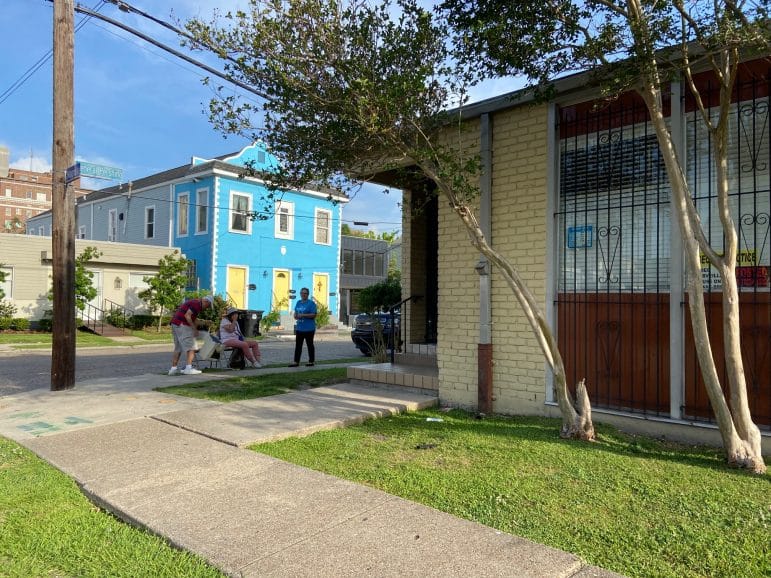 Protesters set up chairs early Thursday (May 5) outside the city’s only clinic offering abortions.

The mood of the public had also changed. A Pew Research poll found 59% of U.S. adults say abortion should be legal in all or most cases, while 39% think abortion should be illegal in all or most cases — with an ever-widening divide according to political affiliation. Yet public opinion has become more nuanced as to what violates a moral imperative.

If the Supreme Court’s final ruling is released as expected, each state will have the authority to pass their own legislation delineating under what circumstances abortions might be legally available. Louisiana is one of at least 26 states that has already passed highly restrictive laws. Former Criminal Court Judge Arthur Hunter said that state legislatures could make laws that force women to carry every pregnancy to term, regardless of how early it is and regardless of the circumstances, including rape or incest. Louisiana women seeking an abortion will be forced to travel out-of-state — if finances permit — to find safe, legal services or revert to unsafe back-room abortions that could lead to death.  Louisiana’s abortion law, RS:40:1061.29, includes a $1,000 maximum fine and up to two years imprisonment for violations.

According to The New York Times, the repeal of current federal law will trigger a ban on abortion immediately or very quickly in 13 states — including Louisiana and the surrounding states of Texas, Arkansas, Mississippi and Tennessee. Fourteen other states, including Florida, Georgia and the Carolinas, could ban abortions even before fetal viability. In Alabama, a 2019 law that includes a total ban would take effect. The Supreme Court decision could also lead to a reversal of other laws that support LGBTQ rights, including same-sex marriage.

“We know these bans (on abortions) have nothing to do with women’s health and everything to do with the power politicians and extremist groups want to hold over women’s lives, their future and their bodily autonomy,” said Christian Nunes, president of the National Organization for Women.

President Joe Biden and his allies in Congress have passed the Women’s Health Protection Act, which would make access to abortion care a statutory right in every state. But with the filibuster rules currently in place, there is not adequate support in the Senate to pass the legislation. Democrats will have to elect many more pro-choice candidates to swing the pendulum back around.  Until then, legal abortions will be most readily available in the more progressive West Coast or the East Coast states. While the conservative legal movement has a chokehold in Louisiana, both coasts should remain relatively untouched.

On April 30, former First Lady Hillary Clinton attended a New York City performance of the new musical “Suffs,” about the women’s suffrage movement. After the performance Clinton commented that “there’s so much of our history that’s both inspiring but also a reminder that the work is never over and there are no permanent victories.” The struggle for women to control their own reproductive health certainly falls in that category.

INTERNATIONAL PERFORMERS IN FREE CONCERT AT PONTCHARTRAIN HOTEL FRIDAY, MAY 6

Azerbarjan-born Amina Figarova, an international pianist and composer, along with her Belgian husband, flutist Bart Platteau, will be playing modern jazz with their six-piece band Friday (May 6) at the Bayou Bar in the Pontchartrain Hotel from 8 until 11 p.m. Admission is free. The group has performed at Lincoln Center on numerous occasions and will also be playing at Jazz Fest this weekend. Figarova and Platteau live and work in New York City but also maintain a home in Algiers.

3 thoughts on “Viewpoint: Supreme Court reminds us ‘there are no permanent victories’”