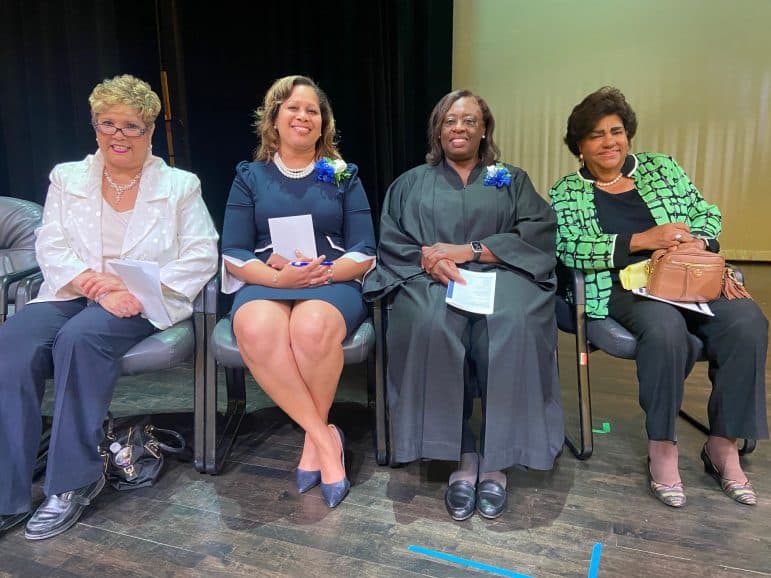 After a Covid-related delay, Chelsey Richard Napoleon will take the oath of office for her second term as Clerk of Civil District Court and ex-officio recorder on Saturday, (May 14) at Southern University at New Orleans. The investiture ceremony will be followed by a free crawfish boil  at SUNO’s Quad. Surrounded by family and friends, Napoleon will be honored Sunday (May 15) at a special Mass at St. Paul the Apostle Catholic Church, where she is an active member of the church’s pastoral council. The following day, Napoleon will also host a golf tournament at the Audubon Golf Course, 6500 Magazine St.

“At the end of the day, we are all in this together,” Napoleon said when asked why she created a weekend of activities to thank the community for their ongoing support. “The voters gave me an opportunity, and I want them to know I appreciate it.”

Napoleon had worked in the Clerk of Civil District Court’s Office for 16 years — 11 of them as chief deputy — before she ran in 2018, succeeding long-time clerk Dale Atkins, who had been elected to Louisiana’s 4th Circuit Court of Appeal. “I believe I was called to it – to serve,” Napoleon said. She sought the office because she knew how it functioned and where improvements were needed. “I could hit the ground running to create efficiencies and build on past successes,” she continued.

Napoleon boasts of many accomplishments during her first term, including an expansion of the e-filing system; an enhanced customer service program offering a first floor office where lawsuits can be filed; and the relocation of the self-help resource center to place it closer to the court’s domestic violence coordinator. “We have gotten really good community feedback as to how quickly lawyers are able to get in and out of the building when using the first-floor filing office,” Napoleon said. “Victims of domestic violence are grateful to have more convenient access to temporary restraining orders because of our reconfigured first floor space.”

A position of senior research clerk was created in the Napoleon’s land records division to assist senior citizens with their property records needs. The part-time position is staffed by long-time employee Gloria Johnson, who took the job after retiring from the division. “People really enjoy that service,” Napoleon said. In addition, archivist Sally Reeves is available for important research.

Napoleon has also begun an outreach and education process to better inform the public about what the clerk’s office is and the services it offers.  “We’re just trying to increase people’s awareness of the civil filing process, land records and the kind of documents including historical records that can be found day-to-day in the office.”

Napoleon also attends community events to explain the office’s function. Napoleon has spoken with neighborhood associations and is a regular participant at Jericho Road’s Virtual Home Ownership Summit each year. She recently was a guest on the Greater New Orleans Housing Alliance’s radio show. Through new partnerships with different organizations, Napoleon is continuing to grow her outreach efforts. She is educating key leaders from across New Orleans so that they can bring back information to their neighborhoods.

Earlier in the Covid-19 pandemic, Napoleon hosted a continuing legal education (CLE) workshop for the New Orleans Bar Association to explain how lawyers could access services. Napoleon has also been scheduling meetings at various law firms around the city to explain the services available through the clerk’s office.

Tours of the clerk’s office are now available for high schools to expose students to potential careers and show the day-to-day operations of the office.  “When I say we educate the community, I mean all facets of the community,” she said.

Napoleon is continuing to grow the technology used in the office to keep up with best practices. She is working with a pilot group on an electronic reporting system for the land records division that would allow remote access to filing documents. She expects to announce this new service soon.

Because of the number of hurricanes and other natural disasters that strike New Orleans, Napoleon is helping tie together civil and property records so that document reviews for successions can move more smoothly. “If someone passes away suddenly, business matters have to be handled immediately,” she explained. For properties that have remained in the hands of the same family for generations, it is often necessary to research the property’s title for federal loans and other disaster-related needs.

During the pandemic shutdowns, laptop computers and mobile internet devices were distributed to employees so they could perform their duties remotely.  Napoleon has since created a remote working team to be better prepared for future disasters. Plexiglass dividers and hand-sanitizer dispensers have become permanent fixtures of the office.

“I take very seriously my responsibilities as clerk and understand what that means in terms of service to the community. Thank you to the citizens of Orleans Parish for electing me to a second term as clerk. Thank you for believing in me and allowing me to serve you,” Napoleon concluded.