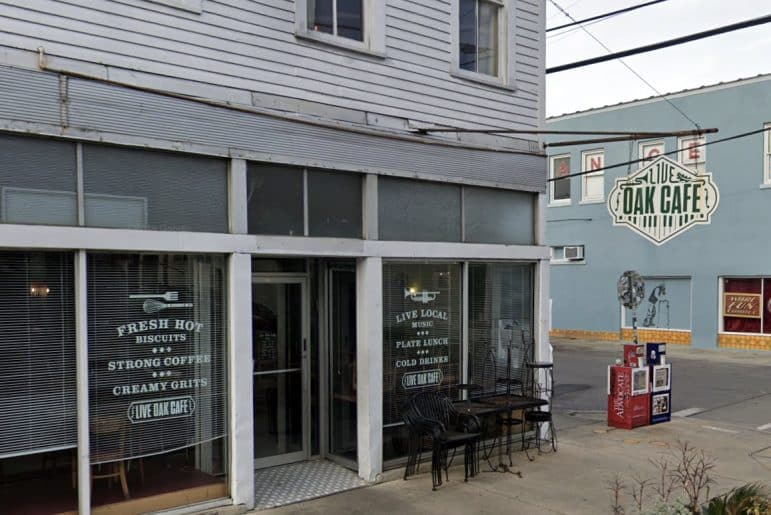 The Live Oak Cafe — the epitome of Oak Street’s laid-back, creative vibe — is closing its doors Sunday (May 8) after its Mother’s Day brunch.

Announcing the closure on the cafe’s Facebook page, chef and owner Clare Leavy said that the uptick in business during Carnival season was not enough to overcome the losses experienced during the pandemic. “Simply put, we are out of time and options,” Leavy stated.

The cafe is known for its fresh, down-home renditions of classic brunch fare with dishes such as Sweet Potato Benedict and its beloved Shrimp & Grits. And every meal at Live Oak has been served with a side of live music. During its nine-year tenure, Live Oak has been popular with local musicians and music lovers as a daytime venue for new and seasoned acts.

The meals and the music stopped, along with everything else, in March 2020. Leavy continued cooking.working with the Chefs Brigade to provide meals for those in need. And she teamed up with local musicians to create the “Sounds of Solidarity” live streaming service during the turbulent summer of 2020.

After Hurricane Ida blasted her plans to reopen and launch a dinner service, Leavy cooked in the dark to feed the community for donation only, according to a GoFundMe page organized by Rachel Stolier and the Friends of Live Oak Cafe. When electricity came back, the cafe became a neighborhood oasis with a charging station and free bags of ice.

“Live Oak Cafe is more to us than a place to eat; it is a pillar of the community that honors and contributes to the culture of New Orleans,” the Friends state on the fundraising page, Life Support for Live Oak: Save a Café that Cares. “It is a place that feels like home, where all are welcome, where musical and culinary creativity meet up and thrive.”

See here for reservations for dinner on Friday and Saturday or for one of the final two Live Oak brunches on Saturday and Sunday.