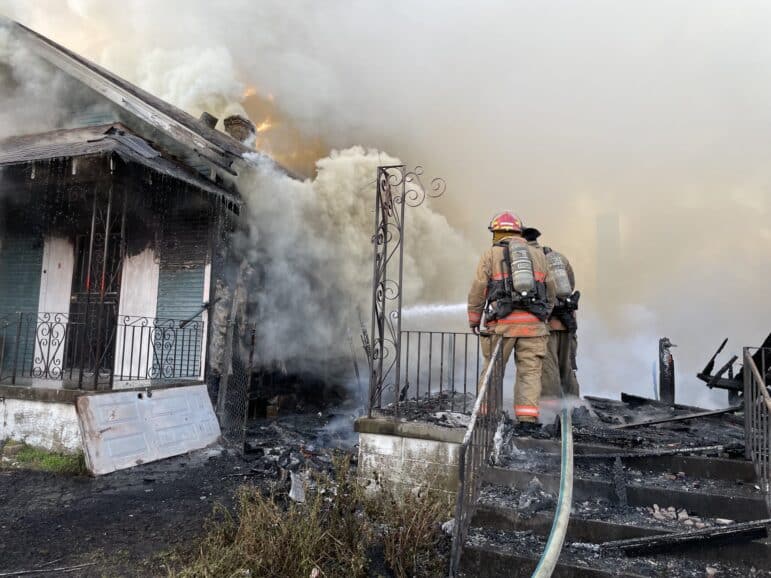 Firefighters battle the blaze on Eagle Street in Hollygrove.

Three vacant Hollygrove houses went up in flames early Wednesday (May 18), the New Orleans Fire Department reported. People, who were believed to be squatters, were seen escaping the fire.

At 6:16 a.m., nearby residents placed a 911 call  reporting a vacant home on fire at 3031 Eagle Street. Arriving on the scene a 6:22 a.m.,  firefighters found three vacant homes on fire and immediately struck a second and third alarm to contain the spread.

The three homes were vacant and had no  utilities. Neighbors stated they witnessed vagrants leaving the house at the time of the fire. One tried to extinguish it with a bucket of water, but was overwhelmed by the heat. They were gone before fire trucks arrived. 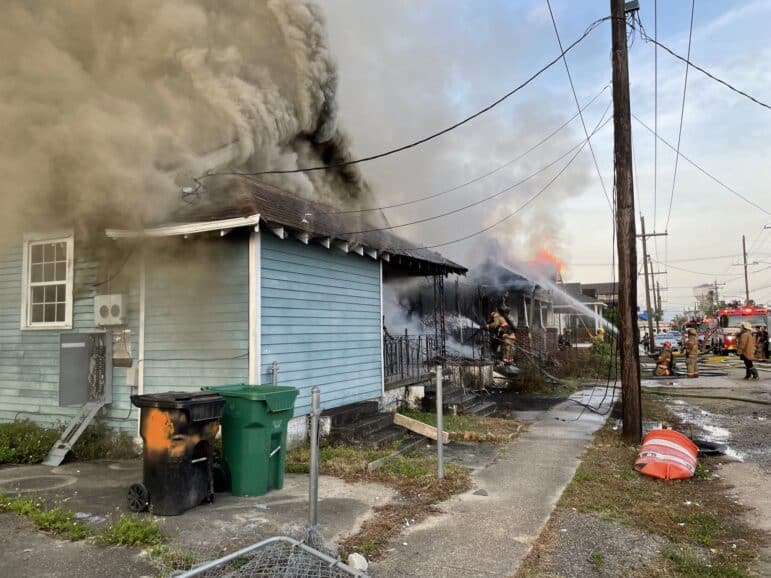 The buildings at 3031 Eagle, where the fire started, and 3027-29 Eagle, also damaged in the fire, are owned by attorney Jerome M. Volk and a group of six other people operating as EFL Ventures LLC, Orleans Parish Assessor’s Office records show. The same group owns 3021 Eagle.

A house at 3035 Eagle St. was also damaged in the fire. Records show the owners of that property as Velma Lewis and two others. Inspections in 2021 found trash and overgrown weeds on the property. In 2020, the Assessor’s Office removed a homestead exemption and age freeze from 3035 Eagle after it was found to be vacant.

Twenty-one units carrying 55 Fire Operations personnel brought the blaze under control at 7:37 a.m. The cause of the fire is under investigation.

More information on the fire-damaged properties was added to this report on May 19.