Those readers who know me personally understand that I am very involved in the Greek Festival, which is returning Memorial Day weekend after a two-year hiatus. During a visit to the Greek church earlier this week, the festival’s long-time operations director, who comes in from Texas, said, “I see you are wearing a mask again,” to which I replied: “I never stopped wearing a mask.”

Just before Jazz Fest, I wrote about an out-of-town friend, a decades-long Fest enthusiast, who wanted to mask at the Fair Grounds even though he is fully vaccinated and boosted. Impractical, I thought, and way too hot to mask.  He recently flew home after two jam-packed weeks during which he attended the festival all seven days, consumed copious amounts of ice cold watermelon in the WWOZ tent, caught nighttime performances such as singer John Boutté at d.b.a., and dined with old friends at Peche, Brennan’s and Doris Metropolitan. On the way to the airport, he even grabbed an oyster po’boy at the Kenner Seafood Market. 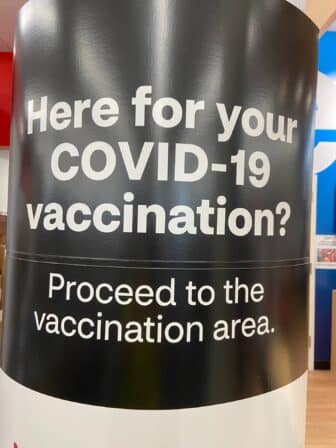 By the time his flight landed in New York, he had the dreaded Covid cough. Positive test results soon followed. I tried to make a same-day appointment at the CVS Minute Clinic at Claiborne and Napoleon, but the schedule was full for the next three days. So I patiently waited almost two hours, like on airline stand-by, until the staff could squeeze  me in. I had already been to the clinic after the first Sunday of Jazz Fest when another friend tested positive. Though I tested negative, I gave my festival tickets away.

The CVS nurse practitioner, who had attended the fest, was surprised that I had never caught Covid. It seems like almost everyone has had it at least once. Luckily, my test came back negative again.

These days the urgent care clinics are teeming with sick patients. This coronavirus strain — more contagious than previous strains — has caught many people off guard, like a former state senator who caught Covid at Jazz Fest and took it home to mama. The next strain could be even worse. Let’s be clear — otherwise healthy people are still dying from this disease needlessly.

The Covid spring hiatus is over. It’s time to put that mask on again, especially in indoor settings. It’s time to get that hand sanitizer back out. If you have not received all the shots and boosters available to you, schedule an appointment today. We are going to have another summer of Covid infections. How it impacts your life is mostly up to you. Take the necessary precautions, like in hurricane seasons, to keep yourself and your family safe.

See here for the city’s list of free Covid testing and vaccine sites.

Although Clerk of First City Court Austin Badon recently lost a fierce bid for the office of Criminal District Court Clerk, he has launched a fundraising drive for his 2023 re-election. A member of the BOLD political organization, Badon could face tough competition in next year’s race but is moving forward with full optimism.

Hosted by former Sheriff and Attorney General Charles Foti along with his two law partners, Lewis Kahn and Michael Swick, the Badon event is scheduled for June 1 at the Kahn, Swick & Foti downtown law office.

One thought on “Viewpoint: It’s time to put that mask on again”