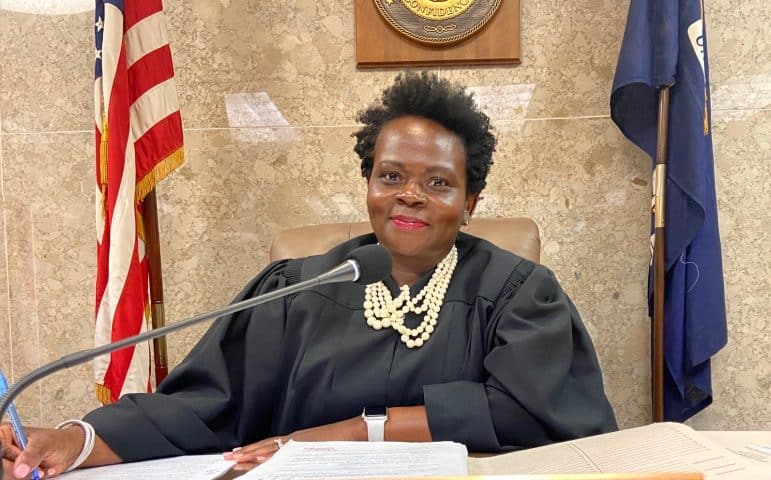 “Service was always part of our lives. It was not optional. Of course I admire my mother and her life-long commitment to fairness, equity and justice, but she never insisted that I become a lawyer or judge,” Judge Johnson said. Her mother was the first African-American chief justice of the Louisiana Supreme Court, where she served from 1994 until her retirement in 2020.

A graduate of McDonogh 35 High School and Spelman College, where she earned a B.A. in psychology, Judge Johnson went on to Smith College to obtain a master’s in social work. “I loved being a social worker because I was able to assist so many people through counseling, therapy and helping kids find permanent homes. I was a helper; that was the plan. But it was also frustrating because of so much red tape, especially for children in foster care. I thought, there’s got to be a better way. I realized that a law degree was necessary if I wanted to become the best public servant possible,” Johnson said.

Judge Johnson is a leader in the legal community. She is a past president of the Louis A. Martinet Society as well as on the board of the Louisiana State Bar Board of Governors and the New Orleans Bar Association. Judge Johnson also is a member of the state bar association’s assistance program for bar members suffering from drug or alcohol problems.

She iworks with various community groups throughout New Orleans, including the New Orleans chapter of The Links, Bridge House/Grace House and her church, United Fellowship Full Gospel led by the Rev. Brandon Boutin.

Judge Johnson is always willing to put in extra time for cases on her docket, working directly with the attorneys appearing in her court. “I pride myself on moving the docket and setting lots of trials. When attorneys are stuck in a certain place, I am always open and available for a conference with all the attorneys present,” Judge Johnson said.

She is also pleased to be able to put her social work skills to good use on the domestic side. Like all new Civil Court judges, Judge Johnson was originally assigned to handle only domestic cases. Even in the general docket, Judge Johnson finds those same social worker skills valuable during settlement conferences. “One lesson my mom did pass along is that I should be very even. Don’t get frazzled. In domestic cases, the people coming before me have life-changing issues. They can be very emotional and angry. I try to be patient and explain the options. Everybody deserves their day in court.”

Judge Johnson labels herself a collaborator and consensus-builder. “I find compromise, common ground whenever possible,” she said. Johnson wants to bring her wealth of knowledge from the trial bench to the Fourth Circuit. “You never know where your past is going to lead you. It all adds up to where you are now. I am excited about this opportunity. I was raised to serve.”

Judge Johnson has always enjoyed the support of a broad base of elected officials and community leaders. Previous endorsements include U.S. Rep. Troy Carter, City Councilman at-large J.P. Morrell, District Attorney Jason Williams, state Sens. Joe Bouie and Jimmy Harris and the AFL-CIO. “There is a lot of energy behind our candidacy,” said her husband, Telley Mandina, with whom she is raising three children. “We are grateful for the support of numerous elected officials, clergy and community leaders.”

Practicing attorney and former ad hoc Criminal Court Judge Hunter Harris IV said that Johnson has an extremely personable temperament and goes out of her way to connect with people and issues in order to resolve the cases allotted to her. “As a practitioner, I am confident that Judge Johnson’s skill set will enable her to excel at the Court of Appeal,” Harris concluded. A host committee spearheaded by lawyer Darleen Jacobs will hold a luncheon fundraiser for Judge Johnson on Friday (April 22) at Ruth’s Chris Steakhouse.