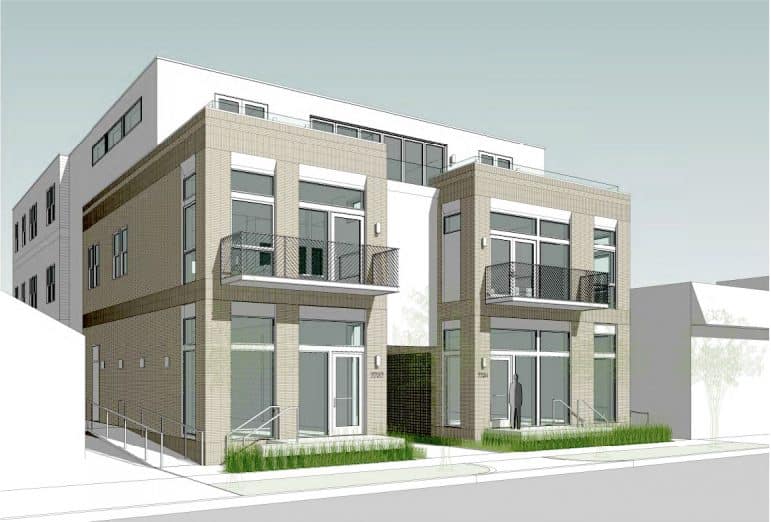 In a divided vote held after two months of hearings, the Historic District Landmarks Commission gave the green light to a new mixed-use building on Magazine Street in the Irish Channel.

Their April 6 ruling will now go before the City Council, which could overturn the vote. The Garden District Association has filed an appeal, GDA Executive Director Shelley Landrieu told Uptown Messenger.

Garden District, Irish Channel and Lower Garden District residents came out in force to oppose the plans for the three-story 15,000-square-foot building planned for an empty lot at 2230 Magazine St. The HDLC received 29 letters of opposition to the plans and one letter of support, according to city records.

The commission’s ruling was limited to conceptual approval of the building’s “massing,” an architecture term that refers to a more subjective measure than the mere exterior dimensions.

It was the massing — an assessment that considers a building’s form, its various elements and how it relates to its surroundings as well as its size — that many neighbors objected to, calling the building’s design and dimensions too imposing and inappropriate for the site.

“It is taking up as much space as possible on that lot without concern for the buildings on either side,” said Laura Schweigman, one of eight residents who spoke against the plans at the March hearing.

“It seems to have one thing in mind,” said Magazine Street resident Justin Vittitow, “and that is capitalizing on every square inch of the property.”

The building is designed to hold seven apartments on the third and second floors and two commercial spaces on the first. The lot is between two one-story buildings on a block largely made up of two-story buildings.

The river side of the 2200 block of Magazine

The developer, Sam Mickal Solomon of Bancroft Property Investments, told the March hearing that the building is actually smaller than what is allowed for the lot.

“In terms of the buildable area, it could have been bigger, but we decided that this was more of the appropriate size for this lot — as well as some of the indentations and the recessing on the front to try and break up that massing,” Solomon said. “So I do want to just point out that we are sensitive to the neighborhood.”

Some neighbors also objected to placing a contemporary design amid the area’s 19th century buildings, saying it is so out of place it would be unsettling.

The architect, Lindsay Butler of Bell Butler Architecture + Design, noted that it follows guidelines from the U.S. Department of Interior and the HDLC that “new construction should be clearly contemporary while being compatible with historic surroundings.”

Several speakers said they were confused over why the HDLC would encourage contemporary architecture. After commenting that she believes the building would compromise the Irish Channel’s historic character, Laurel Street resident Marsha Walley said: “The ‘H’ in HDLC stands for ‘historic.’ So how can the HDLC be persuading architects and contractors and owners to build something that looks contemporary when their job is to be protecting all of this?”

Bryan Block, the HDLC’s executive director, confirmed Butler’s statement. “It is often more appropriate to build something that is of its time than to build something that is a replication of a previous style from another period,” he said. “And so, although we are here to preserve historic architecture, we’re also here to allow the contemporary creativity of the 21st century and hopefully build landmarks of the future.”

The HDLC decided at the March meeting to defer 2230 Magazine to April and send the plans back to the commission’s Architectural Review Committee for a second round of adjustments.

In their second discussion of the design for 2230 Magazine, the ARC architects found “the overall massing and scale of the proposed building was appropriate for the site and the context along Magazine St.,” according to minutes from its March 22 meeting. At the same time, they recommended further design changes — such as lowering the third-floor massing, adding a different color brick for contrast and incorporating more design elements — specifically to reduce the massing.

Architect’s rendering of the 2200 block of Magazine with the proposed three-story building.

As they did in the March HDLC meeting, the staff placed the item on April’s consent agenda, where it could be approved without discussion along with 13 other requests that both the ARC and the HDLC staff had approved. At both meetings, the commissioners moved 2230 Magazine to the regular agenda for a hearing and separate vote because of the number of speaker cards they received.

At the April meeting in the City Council chambers, many speakers came armed with the HDLC guidelines for setbacks, facade, architectural elements and other design considerations. They circled statements that new construction needs to be compatible with neighboring buildings.

“In reviewing these guidelines, the theme of compatibility is stated over and over again,” said Washington Avenue resident Isabel Sanders. “The HDLC guidelines specifically mention the Magazine Street corridor as having ‘a more cohesive architectural style with buildings of similar form, mass, scale, setbacks and materials.’”

The proposed three-story building is compatible with Magazine Street as a whole, Butler countered. It just happens to be next to a one-story Craftsman cottage, she said, referring the building at 2222 Magazine that houses the Wellness Massage Spa.

“It’s not as out of place as they would make it seem,” she said. “Obviously, we can’t do anything about the tiny Craftsman. That one, I would say, is more out of place when you look at the larger context of Magazine Street, rather than the other way around.”

The building is in the Irish Channel side of Magazine Street, the dividing line between the Garden District and the Irish Channel. The corridor is important to both neighborhoods, so the commissioners for both historic districts weighed in, but on separate sides of the issue.

Greg Hackenberg, the commissioner for the Irish Channel, urged his colleagues to vote in favor of the project, noting that the developer and architect went beyond the ARC’s recommendations in scaling it down.

He also noted that the building’s size conforms with the Comprehensive Zoning Ordinance. “For us to overrule that because we think it’s too big, but it conforms to the zoning, is simply outside of our purview,” he said.

Commissioner Anne Redd, who represents the Garden District, spoke against the project, saying she supports the residents’ contentions that the building would violate HDLC guidelines.

“I also appreciate that the developer went back and worked with the ARC, but I still just feel in my heart that this building does not fit the neighborhood,” she said. “I just feel that if we approve this we’re setting a bad precedent for the neighborhood and for Magazine Street as a whole.”

Commissioner Jason King joined Redd in voting against the application, while seven commissioners agreed with Hackenberg and voted to approve it. (Four commissioners were absent, and a fifth commissioner’s seat is currently vacant.)

The proposal needed eight yes votes for approval, requiring Chairman Jesse LeBlanc II to vote. In these cases, LeBlanc said, he usually votes with the majority. “But I am torn about this project,” he said, “because I think there are some things, like the design elements pointed out by the audience, that we do have jurisdiction over.” He voted yes, however, giving the application HDLC approval.

The City Council has not yet scheduled a hearing on the appeal filed by the Garden District Association.