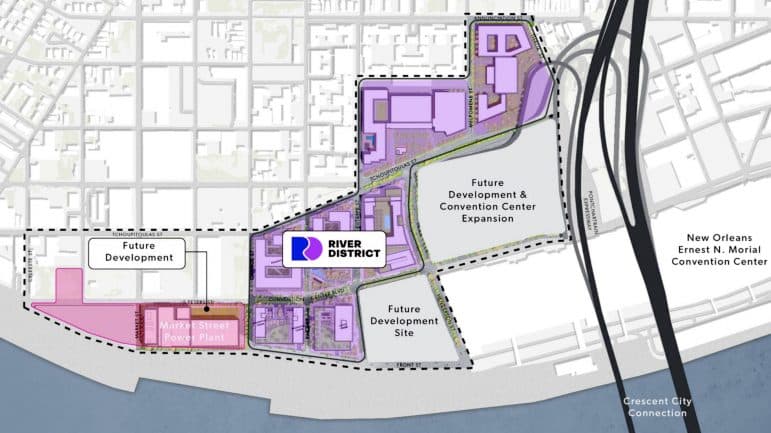 A new neighborhood is planned for the a whopping 27 acres of vacant land in the Lower Garden District.

The developers’ plans include 1,100 new apartments, a boutique hotel, an “apartment hotel,” a grocery store, bars, restaurants, fitness center, offices, green space, a museum and an entertainment venue. The developers say they could break ground as soon as next year.

“This development is an opportunity for a one-of-a-kind mixed-use site that will bring everything you want to see in a neighborhood and more,” land-use consultant Nicole Webre announced to the audience of a public meeting via Zoom last month.

Webre is part of River District Neighborhood Investor LLC, the team selected in 2021 by the New Orleans Ernest N. Morial Convention Center board to develop the site.

According to the plans that the investors submitted when securing their bid for the development, roughly 40% of the new housing units will be affordable or “workforce” housing, priced below market rate.

The River District  would completely remake what is currently a zone of empty lots just upriver from the Crescent City Connection — a rare undeveloped patch of land on even rarer high ground within the city. According to geographer Richard Campanella, the land is “the largest contiguous open space in historic New Orleans.”

“Gigantic cotton-press warehouses blanketed the riverfront blocks of what we now call the Lower Garden District,” wrote Campanella in a June 2021 article for The Times-Picayune. The demise of the cotton press district in New Orleans created the open space now owned by the Convention Center, near the historic Market Street power plant that at one point supplied power to the whole city. 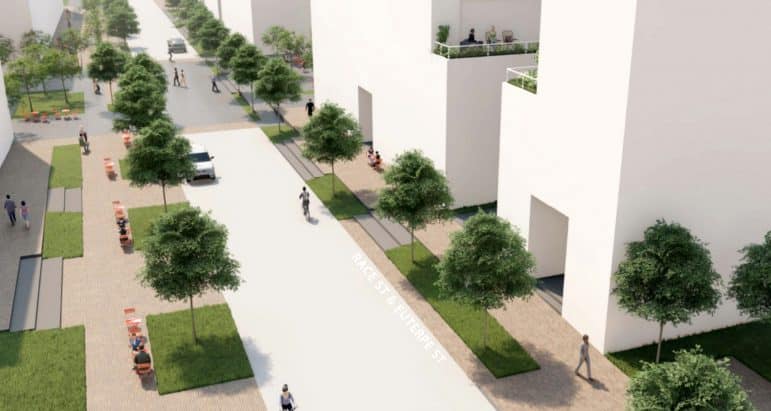 The team has yet to go through the city’s permitting process, explained River District team members Webre and Todd James. James, the director of strategic planning for builders Broadmoor LLC, is vice chairman of the mayor’s Board of Zoning Adjustments.

“The zoning mechanism we will use to accomplish this is a text amendment to an existing height overlay district within the comprehensive zoning ordinance ” Webre said at the Zoom meeting.

She noted that the underlying zoning is MU-2, or high-intensity mixed use, and said that the amendment would change the zoning to reflect a modern neighborhood while eliminating industrial and agricultural uses.

The new zoning overlay district would extend beyond the planned River District, to include adjacent lots that may also be developed; the overlay would cover 47 acres of land in total.

“The New Orleans Comprehensive Zoning Ordinance does not contemplate development sites of this size, so like educational institutions that have utilized their own zoning districts to master plan and develop campuses, we are accomplishing the same through the text amendment to create our own zoning district,” said a spokesperson from the development team via email.

The exact language of the proposed text amendment is still in the drafting stages and is tentatively planned for submission to the City Planning Commission in May.

Architect’s rendering of the mixed-use development on Tchoupitoulas between Melpomene and Euterpe streets.

The plans presented to the community last month also show an extension of Convention Center Boulevard, with Race and Euterpe streets connecting to the district from the lake side.

The first parcel slated for development is on the lake side of Tchoupitoulas, between Melpomene and Euterpe streets. Construction could begin as soon as 2023, with a timeframe of 18 to 24 months.

This phase would add residential and commercial spaces, with 280 residential units and 740 parking spaces.

“A development project of this magnitude will directly affect traffic (both Port and neighborhood) and infrastructure challenges. We hope that with neighborhood coordination and involvement the development will be an asset to the area, reconnecting our neighborhood to the river, benefitting our residents and businesses.”

The developers’ plans situate taller buildings along the river. The lower buildings will be farther from the riverfront.

Rendering of an apartment building at Tchoupitoulas and Euterpe

The project team claims the development will create 5,900 jobs and provide 1,100 new housing units, including 450 units of affordable and workforce housing, while generating $43 million annually in new tax revenue.

Area median income, or AMI, in 2019 was listed at $47,200 a year for a single person in New Orleans and $54,000 for a two-person household, according to data from the federal Department of Housing and Urban Development.

Merideth said the funding for the affordable housing will come in part through low-income housing tax credits. “As such, we will work with the Louisiana Housing Corp. and follow their protocols for affordable and workforce housing,” Merideth told Uptown Messenger.

Pricing in preliminary budgets submitted to the Convention Center board shows that the market-rate studio apartments in the first phase of the project would start at $1,300 a month, while those in the workforce category would be priced at $935 and low-income at $467.

The plan also includes luxury high-rise apartments, with monthly rent starting at $1,700 for a one-bedroom unit. The apartments in the Phase I development stage are thus far set to be mostly studio and one-bedroom units, with about a third designated as two-bedroom and a small percentage as three-bedroom.

Asked whether the units would be affordable in perpetuity, Merideth answered: “Our intention is to provide long-term affordable and workforce housing at the River District. We don’t have specifics beyond that to share at this time. As we move into more active phases of residential development, we will provide more information.”

Rendering of planned development for Tchoupitoulas and Melpomene

Affordable housing advocates are generally positive but guarded about the development.

“First of all, we’re excited to see affordable housing be centered in a project like this,” said Andreanecia M. Morris, the executive director of the nonprofit HousingNOLA.“No one should be building housing in New Orleans without including housing that meets the needs of the average New Orleanian.”

The community land trust and housing organization Jane Place Neighborhood Sustainability Initiative also welcomed the promise of affordability, saying in a statement: “Jane Place is glad to hear that 40% of the residential units planned for the new River District development will be designated as affordable housing, something that our city desperately needs more of to support its residents and workers.”

The group expressed concern, however, over whether the developers would deliver on the promise, saying: “We will continue to follow the project to see how the affordability structure develops but have concerns that ‘workforce housing’ is often just another name for apartments that are not at the top end of market rate but aren’t affordable either.

“Unless the units are affordable for households at 50% AMI, they are not actually serving the hospitality and other low-wage workers who power our economy and who deserve to live in proximity to the Convention Center and downtown hotels and restaurants.” HUD’s estimate of 50% AMI in New Orleans is $23,600 a year for a one-person household and $27,000 for two people.

Morris struck a more optimistic tone on affordable and workforce housing, saying that there needs to be housing priced at levels those earning at or near the median income can afford. “Those folks either choose to leave or they go into other neighborhoods and take up affordable housing,” Morris said.

She said the city needs to figure out ways to house commuters who now live in the communities surrounding New Orleans.

“There are 55,000 people who make less than $42,000 a year and they’re coming into the city [to work]. Our displaced population needs to be helped come home, and we don’t have enough vacant homes for them,” Morris said.

In a statement to Uptown Messenger, Jane Place noted that a lead River District developer, Louis Lauricella, is an officer in Azalea Gardens Properties LLC,  which was sued in federal court by the Louisiana Fair Housing Action Center.

The complaint filed in January alleges that the Jefferson apartment complex’s enforcement of a blanket ban on renting to people with a criminal record results in racial discrimination. Lauricella is not named in the suit.

“It begs the question whether they [Convention Center board members] have any policies in place to take equity into account in the building of this development,” Jane Place officials said.

At least two public hearings are ahead for the former cotton press district. After the zoning request is reviewed by the City Planning Commission staff, a hearing will be held before the commissioners make their recommendation. The City Council will then hold a hearing and take the final vote on the proposed zoning change.