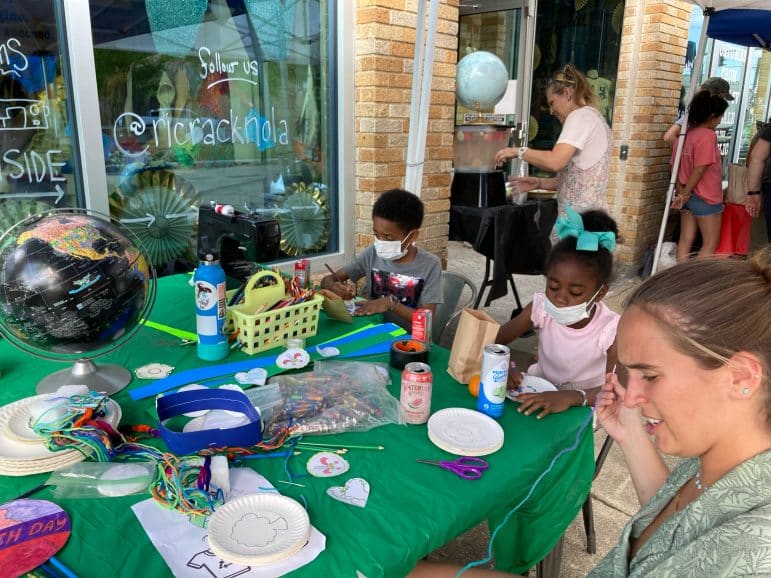 Keeping fabrics and used clothes out of the landfill is core to the mission of the non-profit organization ricRACK. On Friday (April 22), the textile recycler celebrated Earth Day with a variety of activities that support this and their other goals to help save the planet.

“Earth Day has always been a special day to ricRACK,” said Alison Parker, the founding director of ricRACK. “Most people don’t associate sewing with the environment — but fashion, costumes, textile production and recycling all play an important role in climate change.”

According to Business Insider, the fashion industry produces 10% of all humanity’s carbon emissions, is the second-largest consumer of the world’s water supply and pollutes the oceans with micro plastics. What’s more, 85% of all textiles go into landfill each year. And when this happens, the dyes and chemicals from the fabrics leach into the ground water and release greenhouse gasses.

“When you buy, wear, clean or sew clothes, you are making choices every day that affect the environment,” Parker said. “Our goal at ricRACK is to bring awareness to those things.”

The Earth Day celebration at ricRACK was a lively scene with a number of environmental groups participating. There were tables with information and demonstrations — all outside. And inside the shop was this year’s fashion designers’ challenge.

To commemorate Earth Day, ricRACK annually selects local designers to take on a challenge. This year, designers were handed a bag of used men’s neckties to transform into something fabulous and useful.

All these items are for sale as part of a silent auction to benefit the programs at ricRACK. 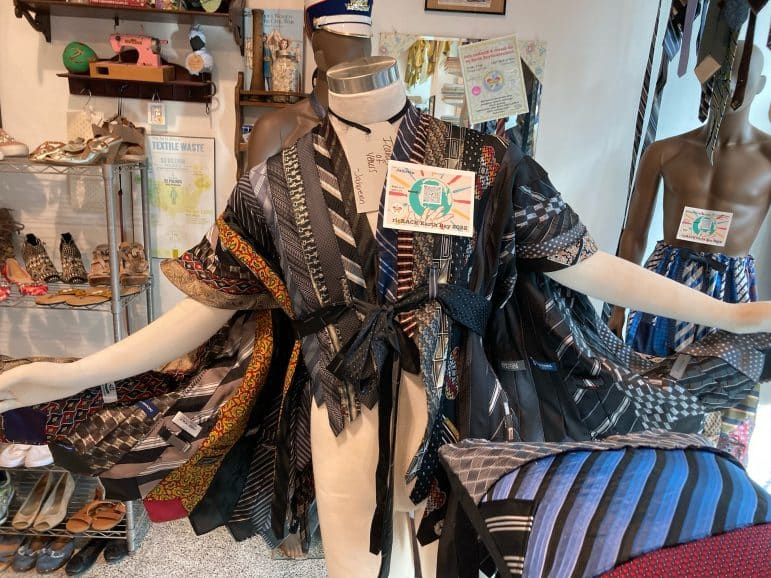 Discarded men’s ties were recycled by local artist Jahireen to create a top.

Outside the shop was humming with activity. Ann Maier, representing the Greater New Orleans Interfaith Climate Coalition, was carding and spinning fibers. Her foot-powered wooden spinning wheel was fast at work as she took a number of natural fibers – cotton, wool and linen — to create yarns in front of fascinated onlookers.

The Louisiana Bucket Brigade was handing out materials and talking to passers-by.  Its stated mission to hold Louisiana’s petrochemical industry and government accountable for the damaging effects of pollution and to aid a transition away from fossil fuels.

At the next table, the Compost New Orleans Waste volunteer Kristen Rizzuto explained that Compost NOW is all about returning to the earth what came from the earth. The organization has a number of collection sites citywide. The compost is collected, turned back into soil and given to local farms. It is supported by grassroots funding, grants and volunteers — lots of volunteers.

Peter Digre of the local chapter of The Climate Reality Project discussed how the nonprofit is keeping up the pressure on lawmakers to act now to stem the tide of climate change. The international group is especially active in Central America.

And to educate the next generation, ricRACK had a crafts table, with a sewing machine, for children to create projects related to Earth Day and saving the planet.

Earth Day was first held on April 22, 1970, to demonstrate support for protecting the environment. It now is a global event, coordinated by EarthDay.org, and
it includes 193 countries. The official 2022 theme is “Invest in Our Planet.”

In spring 1970, then-Sen. Gaylord Nelson, D-Wis., created Earth Day as a way to bring this issue into the national agenda. Twenty million Americans demonstrated against industrial pollution and its effects on the environment. As a result, in December 1970, Congress authorized the creation of a new federal agency to tackle environmental issues, the U.S. Environmental Protection Agency.

Editor’s note: An earlier version linked to the website of a Compost NOW company in North Carolina instead of Compost New Orleans Waste. Uptown Messenger regrets the error.