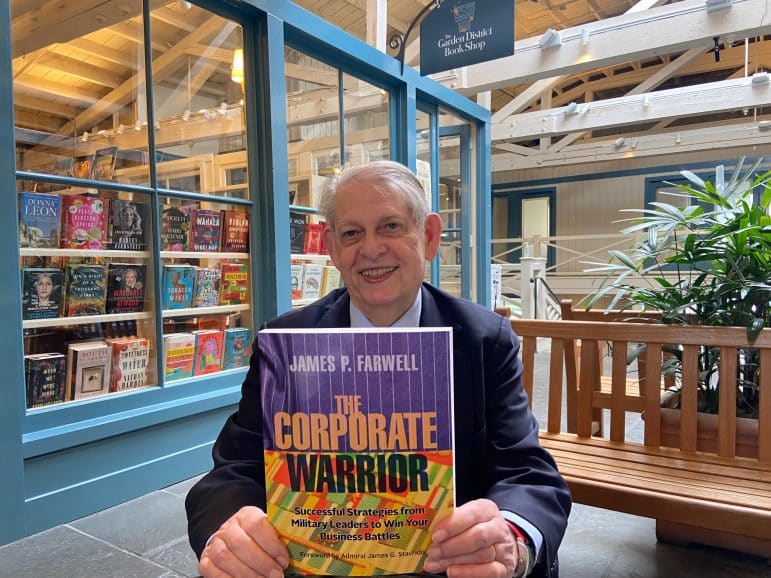 A new book by a New Orleans author examines military strategy that can be applied to business success in the civilian world. James P. Farwell’s The Corporate Warrior: Successful Strategies from Military Leaders to Win Your Business Battles was released in early February, a few weeks before Russian invaded Ukraine, drawing many Americans into closely following military maneuvers.

Farwell said the Russian offense against the Ukrainians appears to be poorly organized and lacks a key leader and well-thought-out plan. “The Russian army was not prepared for this fight. Their troops are not well trained, armed or supplied,” he said.

Comparing Ukrainians’ struggle against Russia to the Afghani’s struggle against the Taliban, Farwell discussed some intangible strategic assets. “The Ukrainians have the ability to defend their country because they are passionate about their homeland, have moral courage, the will to fight and a cause to fight for,” Farwell said.

A global security expert in information warfare, corporate strategic planning as well as cyber policy, cybersecurity and cyber strategy, Farwell planned to write The Corporate Warrior for years but never had time until the Covid-19 pandemic began.

Farwell is an associate fellow in the Department of War Studies at King’s College, University of London — arguably the top war college globally for strategic thinking — and a non-resident senior fellow at the Middle East Institute in Washington. D.C. Farwell has also advised the U.S. Department of Defense. He is frequently published in national security journals such as The National Interest, Defense One and Defense News.

In the book, Farwell explains how both the military and executives can learn from each other in devising and executing strategies. “There are many similarities but also differences. Products succeed or fail, but you won’t get killed competing with another company. The military has to deal with the uncertainties of battle. That’s what Count Carl von Clausewitz, a Prussian general and military theorist who was born in 1780, famously termed the ‘friction’ of war — unpredictability and uncertainly,” he said.

Easy to read, the book entertains while it informs. It tells the back-stories of how companies like Nike, Apple, IBM and even Harry’s Razors used imagination and innovative thinking to get started and grow into historical successes. “All these companies were led by men and women with imagination and the willingness to defy naysayers, much like many top generals have faced. Steve Jobs had to stare down a chorus of folks who disagreed with his strategy. How he handled it is a great story. IBM was going broke and had to reinvent itself,” Farwell said.

He argues that an essential element to building a successful business is developing the right culture. “The best companies aim to improve people’s lives and root themselves in strong values of integrity, excellence, discipline and loyalty,” Farwell said.

The book also discusses successful military approaches. “People ask me how good our top generals are. The answer is that they are incredibly outstanding: charismatic, forceful, smart team leaders who build strong teams,” Farwell said. “Petraeus’ handling of the surge in Iraq was masterful. He understood the importance of building trust by sticking to the truth and being the first to get the truth out.”

Farwell called the conflict between the Ukraine and Russia “a tragic war and arguably one that might have been avoided.” The chief surprises, he said, are how bad the Russian army turned out to be and how good Ukraine is.

“Battles are won in the heart. You need to have the will to fight and a cause to fight for. That’s the core of von Clausewitz’s thinking, which is well accepted for today’s threat environment even though he wrote it in 1832. The Ukrainians have these qualities, and they have the moral high ground,” Farwell said. “The Russians don’t. Russia has lost 25 percent of its effective fighting force, and you cannot win a war while taking that many casualties.  Russia’s failure represents a failure to devise and execute a viable strategy or act upon accurate intelligence.”

Farwell will be speaking about the book and signing copies at the Garden District Book Shop, 2727 Prytania Street, on April 21 at 6 p.m.