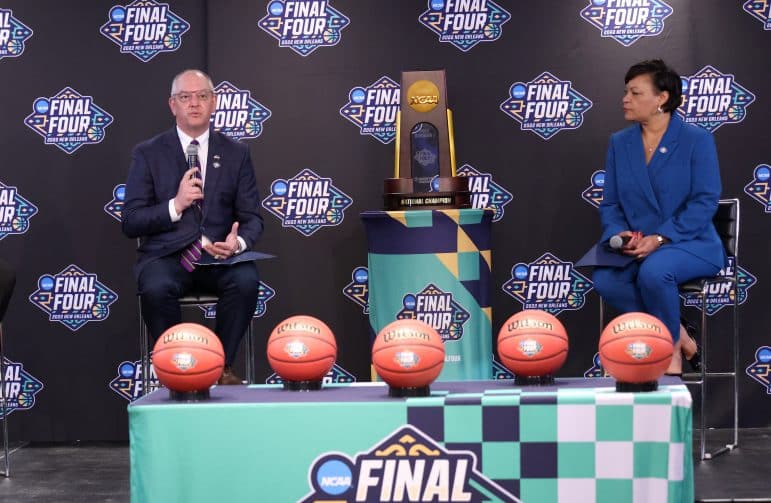 Gov. John Bel Edwards and Mayor LaToya Cantrell speak at the “Tip Off” press conference on Feb. 21. The Final Four will take place April 2-4 at the Caesars Superdome with free community events across the city.

New Orleans’ reputation as a world-class destination for sports tourism will be on full display next week (April 2-4) when thousands of fans and players descend upon the city for the 2022 Men’s Final Four in the Caesars Superdome. It will be the sixth time that the Men’s Final Four has been held in New Orleans.

For more than 30 years, the Greater New Orleans Sports Foundation has played a leadership role in coordinating the highly competitive bid processes that have led to more than 100 signature sporting competitions in the city. They have also worked seamlessly with various national governing bodies like the NCAA to execute these multi-million-dollar events, many of which draw television audiences in the millions.

“This year is extra special,” said Gov. John Bel Edwards at last month’s “Tip Off” press conference. “When you think about what we, in Louisiana, and what this city and region have gone through these past few years, through it all the NCAA has stuck with us.”

New Orleans had already hosted the Super Bowl several times when in 1987 former First NBC Bank president Ian Arnof approached the Young Leadership Council about the idea of a nonprofit sports commission aimed at developing New Orleans into a national leader in sport tourism. Then YLC president Chris Johnsen formed a committee that included realtors James Hardy and Jerry Delahoussaye along with Doug Thornton, a former college football star who was an oil executive at Taylor Energy.

The trio teamed up with another former athlete and sports marketer Mike Millay to put together an operational plan, survey available venues in the region and raise the necessary startup funds — with significant assistance from the Bureau of Governmental Research, the New Orleans Business Council and the late LSU Health Systems Chancellor Dr. Mervin L. Trail, who became the foundation’s first board member and chair. “Merv was really the founding father of the Sports Foundation. It was through his contacts that we were able to put everything together,” James Hardy said.

Millay became the foundation’s first director, and with Thornton, realized that Tad Gormley Stadium, if renovated, was the perfect location for the 1992 U.S. Olympic Track and Field Trials. “In the late 1980s there were only seven or eight cities that had a sports commission before we created ours,” Millay said. “Today there are over 250 municipalities that have dedicated staff year-round focused on sports tourism, so competition has dramatically increased. The Sports Foundation was a pioneer in the sports tourism space and continues to be a leader nationally.”

Thornton took the fundraising lead, and current Sports Foundation President Jay Cicero served as director of sales. The historic stadium in City Park was painstakingly brought up to modern standards to host the Sports Foundation’s first major event.  Thousands of New Orleanians and visitors from around the world enjoyed thrilling performances by decathletes Dan O’Brien and Dave Johnson as well as runners Gwen Torrence and Michael Johnson, long jumper Jackie Joyner-Kersee and many others.

With a successful Olympic Trials under their belt, the Sports Foundation went on to host three more Super Bowls as well as events in such sports as volleyball, soccer, softball, karate, synchronized swimming, cheerleading, gymnastics, acrobatics, wrestling, pole vault, golf and even fishing.  The national and global exposure some of the events offer is also unmeasurable.

Millay moved on the other sports marketing positions including with Disney and ESPN. Thornton led the Sports Foundation until he joined the Superdome’s management team. Today he is executive vice president of ASM Global, which manages the Superdome, the Smoothie King Center and more than 300 other venues worldwide. Cicero stepped into the president’s shoes in 1997 and has served in that capacity for 25 years.

Attorney David Sherman and former Civil Sheriff Paul Valteau are co-chairing the local host committee. They are two examples of the committed board members who have worked with Sports Foundation for decades. Sherman has been on the board for more than 30 years and has served as chairman much of that time. Other prominent board members have included retired UNO Coach Ron Maestri, former City Council President Eddie Sapir, businessman Arnold Baker, hospitality industry leaders Vicky Bayley and Pat Denechaud, and Dillard University Athletic Director Kiki Baker Barnes.

“This place (New Orleans) is vibrant, and we’re excited to be able to make it even greater with the event coming here in April,” said NCAA Senior Vice President of Basketball Dan Gavitt. The Men’s Final Four will offer several free family-centered events including Reese’s Final Four Friday when the competing teams will practice at the Louisiana Superdome; the Fan Fest at the Morial Convention Center presented by Capital One; the Men’s Final Four Dribble at the Mississippi River Heritage Park and the March Madness Music Festival at Woldenberg Park. Volunteers are still needed to assist with those events. Interested individuals can contact GNOSF at 504-525-5678.

To foster goodwill and sportsmanship, the NCAA is also renovating the basketball court at Morris F.X. Jeff Sr. Park in Algiers as a Legacy Project and created a literacy challenge for second- and third-graders, Read to the Final Four, which involved nearly 13,000 local students. 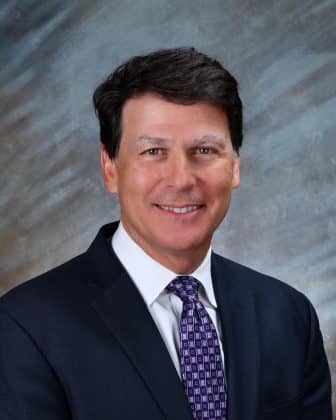 The sports events generate a huge economic impact and positive media exposure for New Orleans, Cicero and other officials said. The 2012 Men’s Final Four in New Orleans generated an estimated economic impact of $168 million and thousands of jobs. More than 75,000 fans booked 229,000 hotel room nights for the 2012 event. By 2025, major events hosted by GNOSF will have turned an estimated $50 million public investment and $100 million in private fundraising into more than $3.44 billion in economic impact for the city and state, according to Cicero.

“New Orleans’ rich history in food and music has provided the bedrock for tourism. What attracting and hosting sports events does for New Orleans is provide national and international audiences a living commercial highlighting how much fun the city is,” Millay said. “Broadcasters share cityscapes, the vibrancy and must-see sites in a non-commercial way, which is more impactful. Sports event provide the most visible platform for cities to amplify their brands.”

“The NCAA Men’s Final Four places New Orleans on the national stage as the greatest host city for such events. It is a great showcase for our city,” said Mark Romig, New Orleans & Co. senior vice president and chief marketing officer. “To have hotels filled, and people dining and shopping, is a major shot in the economic arm we need as the vaccine mandates are lifted as well as the mask mandates. Add to this the boost for the local spirit we are all experiencing, which is priceless.”

Editor’s note: Opinion columnist Danae Columbus served on the Sports Foundation’s board during its early years and was actively involved in the 1992 U.S. Olympic Track & Field Trials.