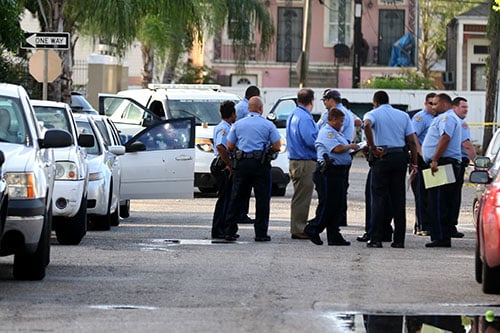 Thirteen year-old Byron “Little B” Kelly Jr. was just a normal kid who enjoyed haircuts and football. Kelly’s decision to walk to the corner store Tuesday evening (March 15) inextricably placed him in harm’s way. Unfortunately, Kelly’s life — like those of many other victims of senseless acts of violence — ended far too soon.

Despite multiple marches, candlelight vigils and impassioned pleas by the public, the New Orleans Police Department under the direction of Superintendent Shaun Ferguson has not been able to reverse the crime epidemic. Carjackings may have slowed during Carnival but could spike again anytime. The NOPD suffers from ongoing manpower shortages, low morale and never-ending attrition.

To reimagine how to achieve true public safety, a new law enforcement leader with a new title could be elected by the voters and given superseding authority over all local police agencies. This suggestion is not an attack on Ferguson but a recognition that the system currently in place is not keeping New Orleanians safe.

Across the U.S. there has always been debate about whether elected or appointed police superintendents are preferable. Are elected chiefs more accountable to voters? Do they work more cooperatively with other elected officials? Are they more driven to succeed? How do they define success? Do they do a better job of learning about and implementing best practices including some that might not be popular? Would they have a bigger voice in major public policy decisions? Would they do a better job of building and maintaining morale? Would they spend too much time fundraising and be obligated to donors? Would they really be independent? Would the election be a popularity contest or based on qualifications? Should citizens have the right to choose their chief?

Some groups like the Metropolitan Crime Commission have long supported an elected rather than appointed police superintendent. “We can see the train wreck of an appointed chief going back decades,” said MCC president Rafael Goyeneche. “It is an outrage that surging crime has been lingering for two years. An elected police chief is answerable to the public. It’s not a panacea and it’s not guaranteed. Rome has been burning for quite a while. It didn’t catch fire today. The difference is the public is demanding of police that something be done.”

Historically, many law enforcement chiefs at the local level were elected. Over the years the tide shifted to superintendents who were appointed by a municipality’s top elected official in coordination with the municipality’s legislative body. Oftentimes the process includes a citizens’ review committee or a police oversight panel. A few major cities also have a police commissioner in addition to or instead of a police chief. Some commissioners are civilians hired by a citizen board or commission. Others are highly experienced law enforcement officers who have been elected to serve and given broad authority and budget control to get the job done.

Although the NOPD is down to fewer than 1,000 officers, the overall number of law enforcement officers in Orleans Parish is much bigger once all the deputies employed by the Sheriff’s Office, the Dock Board, the Flood Protection Authority, the universities, Morial Convention Center, City Park, HANO, RTA, the Orleans Parish School Board and others are considered. If all the police forces were consolidated and coordinated under one top law enforcement officer, the public would feel safer.

This is not to say the Harbor Police, for example, would stop patrolling the wharves or that deputies would abandon the prisoners at the Orleans Justice Center. But in pre-selected situations when the city’s overarching need come first, the other agencies would pitch in officers.

This system would create a powerful new leader but also someone the majority of voters selected. Citizens could also vote the official out of office in four years if he or she failed to perform. To implement this vision, new state laws as well as changes to the New Orleans Home Rule Charter would have to be approved by legislators and voters respectively. Although opposition would be substantial, the need for public safety is paramount.

Under current law a New Orleans’ mayor has the unilateral authority to hire and fire the police superintendent (and almost every other department head) without seeking recommendations through a formalized citizens’ structure or even the City Council. Although the police chief technically sets the department’s policies and procedures, he or she must fall in line with the mayor’s directives to stay in the boss’s good graces.  It is extremely rare for police chiefs to publicly criticize their mayor. In other words, a chief’s hands — like Ferguson’s — are often tied for fear of losing his or her job.

Even former Superintendent Ronal Serpas, now a professor at Loyola University, did not lambast his former employer Mayor Mitch Landrieu in real time. The NOPD arguably had 1,400 officers during Landrieu’s term. Yet Landrieu instituted a hiring freeze that some, including Serpas, believe led to the crime surge that has been lingering for more than two years.

New Orleans has had a number of excellent police chiefs who have successfully pushed back against crime. Richard Pennington and Michael Harrison were competent, responsible leaders and also accountable to the public. Despite naysayers, Pennington promised to reduce the murder rate and then cut in half in less than four years. Arnesta Taylor and Warren Riley — who himself tried to get elected — also did a decent job along with Warren Woodfork, who laid in state with full ceremonial honors yesterday at Gallier Hall and is being buried today. Former mayors Dutch and Marc Morial both undertook national searches to help identify candidates for police chief.

In a hotly contested election in nearby Kenner, voters will select a new police chief later this month. Police chiefs are elected in Gretna, Westwego and Lafitte as well. Jefferson Parish Sheriff Joe Lopinto oversees the parish’s unincorporated areas and already works cooperatively with the other elected chiefs in the parish. On April 30, Lopinto will ask voters to approve an additional 7 mills to fund salary increases for JPSO deputies, correctional and clerical staff which should reduce defections to other police agencies which offer higher salaries.

After four years of failing to successfully prioritize NOPD rebuilding, Mayor LaToya Cantrell is proposing salary supplements for officers and is likewise beefing up recruitment. Her salary hikes recommendations are awaiting a  ruling from Louisiana Attorney General Jeff Landry, with whom she has tangled previously. Though recruitment is increasing, the New Orleans Police Academy can only graduate a small number of officers annually. It will take years and many millions of dollars to right-size the NOPD.

In the meantime, violence will continue. The number of homicides in New Orleans so far in 2022 is approaching 50, almost twice as many as in 2019. “It is unconscionable that we’ve lost another New Orleans child to gun violence,” said District B Councilwoman Lesli Harris about Little B Kelly’s death. “New Orleans must do better to make sure our youngest can grow into our future leaders.” Confidence in the NOPD’s ability to address crime is at a historic low. Perhaps an elected police commissioner is part of the solution.

4 thoughts on “Viewpoint: It’s time to consolidate the city’s law enforcement under an elected commissioner”