With music ringing out from speakers on the basketball court, tasty food from local eateries Peewee’s Crabcakes and Heard Dat Kitchen and a variety of local institutions with tables full of swag, the city’s first Neighborhood Cares initiative event brought the party to the Keller Community Center.

The event organized by Hands On New Orleans and the Mayor’s Neighborhood Engagement Office kicked off the initiative that is part vaccine drive, part job and resource fair, and part neighborhood cleanup.

At the many tables laden with swag, residents talked with representatives from city offices and nonprofits talked to residents about how to access services.

Nola Ready, New Orleans’ disaster preparedness agency, had a table, as did Nola 311 and RoadWork Nola.  Roadwork Nola workers had tablets at the ready at the table and were showing attendees how to use the website to check on construction and street repair in their area, and contact the agency about concerns.

There are several Roadwork Nola projects active in Central City, and the website shows the construction areas and road closures. Residents can also call 504-658-ROAD to get information or communicate with the agency.

At a neighboring table, workers from 311 were at the ready to explain how to use the city’s non-emergency number.  Orleans Parish residents can call 311 to report infrastructure issues like potholes and streetlight outages; problems with trash and recycling, mosquitoes and rodents and other issues. The service connects them to the relevant agency.

Nola Ready workers surveyed residents about disaster preparedness as they gear up for hurricane season, officially from June 1 to Nov. 30. The agency connects people to resources and provides education on disaster preparedness and response. Since the pandemic began, the website also provides resources for New Orleans residents to find Covid-19 vaccination and testing sites.

The New Orleans Public Library system also had a table set up, and two librarians were signing people up for library cards and promoting the library’s outdoor story time and other resources. Librarian Marta Siuba, who works at the Central City branch, mentioned that they had signed up many college students for library cards at the resource fair.

“We’re really happy to be here and be part of the community,” Siuba said. She also was eager to plug the library’s culture pass program, which grants library card holders free access to local cultural institutions like museums and even the Audubon Zoo. 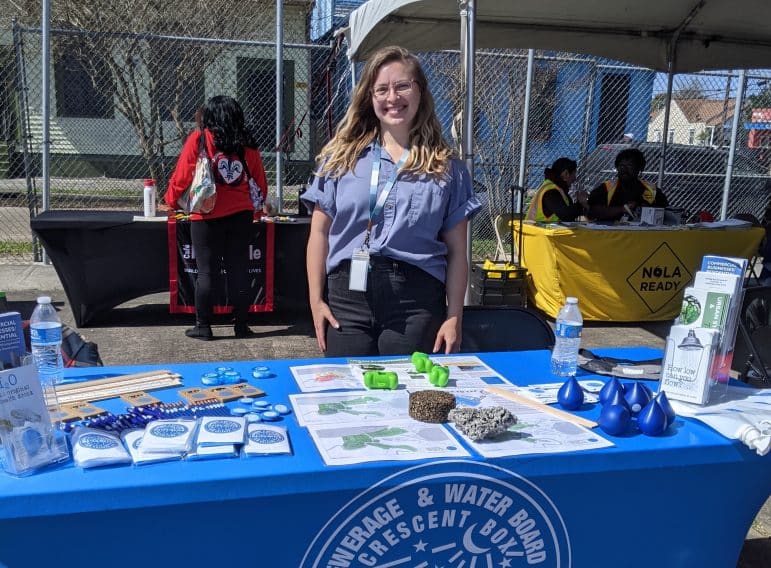 Grace Vogel of the Sewerage. & Water Board.

Grace Vogel of the Sewerage & Water Board was conducting outreach regarding the S&WB’s role in stormwater management and the use of green infrastructure to prevent flooding. Stormwater runoff simply goes untreated into the lake, she said, so managing runoff is crucial to the ecological well-being of the lake.

On her table, nestled among the literature and crescent-moon logo swag, were chunks of different types of permeable pavement. She explained that all new commercial parking lots must use permeable materials to prevent runoff that overwhelms the stormwater system during heavy rain events. “Every drop counts,” she said.

The Audubon Nature Institute was staffing a table with their own swag — butterfly coasters, reusable straws, glasses-cloths decorated with lions, and canvas tote bags that proved very popular with the event-goers.

Rita Palermo, a human resources manager with Audubon Institute, was promoting the zoo and aquarium’s hiring spree. The Audubon Institute is hiring for a number of service positions in their locations, from gift shop cashiers to cooks and camp instructors.

Palermo said the pay starts at $10.50 per hour, though this is slated to increase soon. The Audubon’s locations close at 5 p.m., meaning no late nights on the job, said Palermo, and it’s “a good job for your first job,” said Palermo.

“We’re here trying to fill a lot of our positions,” she said and mentioned that Audubon will work around students’ class schedules.

Health care workers from New Orleans East hospital, now a part of LCMC group, staffed a nearby table to give residents Covid vaccines. On offer was the Pfizer-BioNTech vaccine, which can be given to children ages 5 and up as well as adults. Darnell Caldwell, a nurse and the mobile team supervisor, noted that for the booster shot, people can “mix and match” vaccines.

Pre-pandemic, Caldwell was in the operating room as a surgery nurse. However, when asked what she thinks of her new role going to several community events each week to provide care and vaccines, she says “I love it.”

Caldwell says that the reaction to the mobile vaccination unit has been very positive thus far. “Most people are getting vaccinated, that’s why our Covid numbers have been low,” Calwell said.

“We’ve still gotta wash hands, and keep up with regular vaccinations,” Caldwell said. She also recommended “eating fresh fruits and vegetables, staying up to date on flu shots, getting a good night’s rest, drinking water — all those contribute to a healthy immune system,” Caldwell said.

As the event wrapped up at noon, the volunteers returned from the neighborhood cleanup bearing heavy trash bags and smiles. Ngadi Kamara, a marketing major at Tulane,  said this was her first cleanup but won’t be her last. “I would definitely do it again,” Kamara said.

Kamara  had wanted to do community service that would extend beyond Tulane’s campus, and heard about the project through Hands On New Orleans. She said she would like to bring friends the next time, and was reflecting on the significance of bringing Tulane students into the neighborhoods.

“This is where we’re reflected,” Kamara said. “I’m just glad I was able to help out and participate. It felt good to be out in the community.”