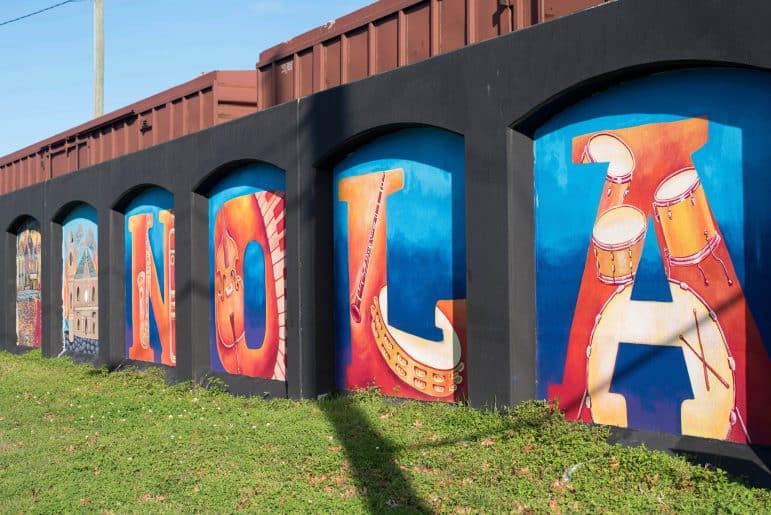 The floodwall that lines Tchoupitoulas Street is turning from grey concrete into a vivid, mile-long mural. When it’s finished, it will be the longest in the country.

The detailed paintings begin in the 1700s with illustrations of original Native American settlers and will continue through the present day, including imagery that documents the Covid-19 pandemic. Other sections painted on the mural so far illustrate Ursuline nuns, the slave trade, the Great Fires of 1788 and 1794, the Battle of New Orleans and Congo Square.

The mural pays tribute to the area’s indigenous settlers. Tchoupitoulas is the namesake of an Indian tribe and is believed to mean “those who live at the river.”

The mural is a project of the New Orleans International Muralists under the artistic direction of New Orleans born and raised artist Jamar Pierre. Pierre said community feedback thus far has been positive, especially in regard to the representations of various cultures.

“They especially love how I’m using the river to tell the story of our history, because they understand that the river ties in everything.” he said. “People really love the Native Americans … a story that needs to be told because they realize that we’re not all just about French and fleur-de-lis and saints and Spanish.”

Pierre said that this project is an opportunity to create a free public education tool that can preserve the history and culture of New Orleans as it constantly evolves. He added that he feels it’s important for a New Orleans native, someone truly connected to the city, to take on a project such as this one. 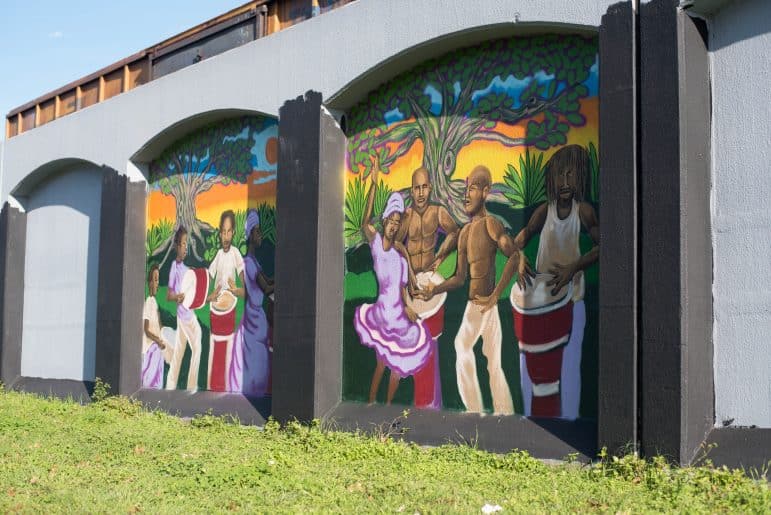 The mural depicts Congo Square, a gathering spot for the city’s enslaved population.

The self-taught artist has worked with Ashé Cultural Art Center, the Ogden Museum of Southern Art, the New Orleans Museum of Art and the New Orleans Jazz and Heritage Festival. In 2018, he was selected by the Greater New Orleans Foundation to create the city’s official artwork for the Tricentennial Celebration. The eclectic design, titled “Resilience,” also served as a preview for the Tchoupitoulas Floodwall Project.

For more than the past 20 years, his work, including this project, has centered on improving city landscapes, promoting education, and fostering community through engagement and collaboration.

“Resilience” by Jamal Pierre was created for the city’s tricentennial.

In addition to using his personal experiences as a New Orleans native and research gathered from published sources to design the mural, Pierre also incorporates history learned in conversations with elders and other members of local communities.

“This [project] is a collaboration with stakeholders [and] with cultural bearers. This is not just about me, it’s about working with other people, working with entities bigger than myself, and doing a greater good for the city,” Pierre said.

Some imagery he looks forward to painting as he works his way down the timeline include portrayals of figures such as James Booker, the 1984 World’s Fair, and the founding of WWOZ and the Jazz and Heritage Festival.

He’s collaborated with local artists and organizations to assist him with painting, such as YAYA, an organization that mentors and encourages creative students to become successful adults.

To paint a full picture of New Orleans’ diversity, Pierre encourages collaboration with additional community members and organizations to share stories, photographs or any other forms of New Orleans history that he can incorporate into the timeline.

“It’s a new day…it’s time for me to meet with other community members, like people in the Irish Channel, to tell this story,” he said. “It’s important to tell the history of  the Italians and the Irish, too.” 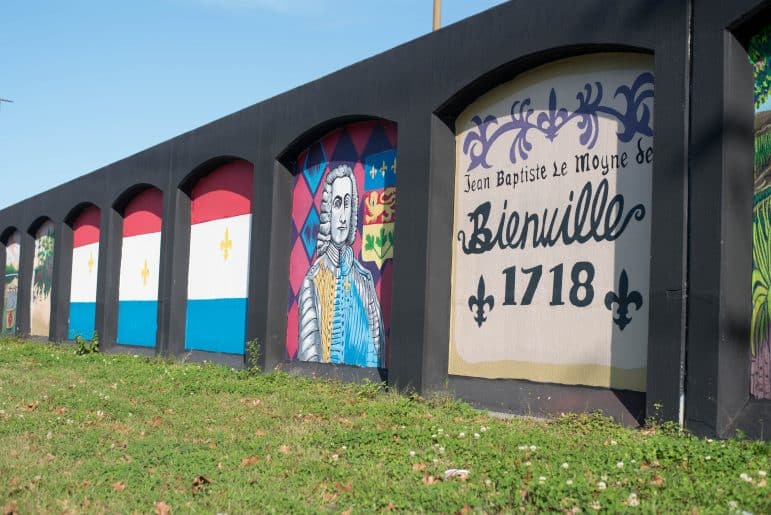 The mural celebrates Jean-Baptiste Le Moyne de Bienville, the French explorer who saw potential in the land between the Mississippi River and Lake Pontchartrain.

The project has been in the works since 2015, when the idea was born. Pierre said after two years of calls, emails, meetings and in-depth presentations, the Flood Protection Authority East and the Army Corps of Engineers granted permission to paint the wall in 2017.

The painting commenced in 2018, after a year of raising funds, conducting research and mapping out designs. Currently, two of the 12 blocks have been completed. Pierre explained progress is slow mainly due to funding needs. When the allotted donations are completely used, work on the project is paused.

Each block of the project takes about $75,000 to complete, he said. The paintings are labor-intensive and take time, Pierre said, because he is dedicated to treating them with the same intention and care as a piece of fine art.

A project this large and monumental requires patience, he said. When efforts must pause between funding donations, he is allowed additional opportunity and time to meet, conduct research with, learn from and engage with interested organizations and community members.

NOIM has received some sponsorships, grants and donations over the past few years, but additional funding is necessary to continue momentum and complete the project.

If you or your organizationis interested in becoming a sponsor or contributing research or history for consideration, contact Pierre at artbyjpierre@gmail.com. Additional information on the mural can be found here.

Click here to donate to the floodwall project. New Orleans International Muralists has partnered with the National Performance Network to ensure all donations are tax deductible.

2 thoughts on “Longest mural in the U.S. is emerging on the Tchoupitoulas floodwall”