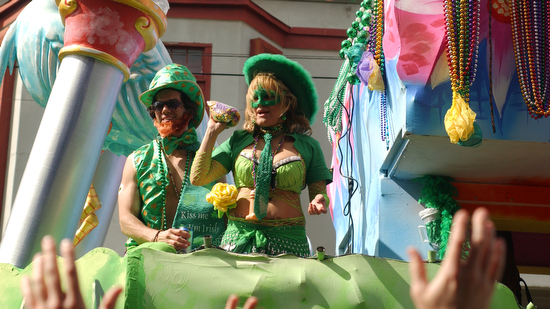 The Irish Channel St. Patrick’s Day parade will roll today (March 12) for the first time in two years. Although the sun will shine, riders, musicians and marchers will have low temperatures and high winds to contend with.

The National Weather Service predicts temperatures in the 40s, with an afternoon high near 51 degrees, and a 15 to 25 mph north wind, with gusts as high as 40 mph.

Green beads and cabbages will fly from 29 full-sized floats with 60 riders each. Bands, walking groups and dance troupes will add to the fun.

The parade begins at 1 p.m. and will follow this route:

Parking
Parking is restricted along parade routes two hours before and after parades to be sure parade elements and sanitation crews can access the street.

Parking will be prohibited from 6 a.m. to 5 p.m. on the following streets:

As always, pay close attention to posted signs; don’t block hydrants, driveways and sidewalks; don’t park within 20 feet of a crosswalk, intersection, or stop sign; and park in the direction of travel on one-way streets and with the right wheel to the curb on two-way streets. 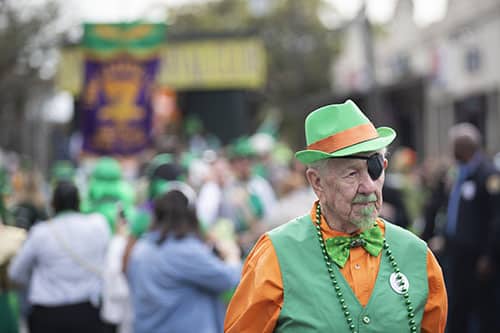 The Lyons Carnival Club marches down Magazine street during the 2019 Irish Channel Parade.

Public restrooms
The Irish Channel St. Patrick’s Day Club will have two PortoLet restrooms available for public use at the following locations:

Traffic
Before the parade begins or when crowd size warrants, the New Orleans Police Department will close the route to vehicles. Plan ahead and avoid streets that intersect with the parade route. Track the lead and tail of the parade as it rolls with the parade tracker at routewise.nola.gov.

All RTA service alerts, updates, and detours can be accessed by downloading the RTA’s GoMobile app. To learn more, visit www.norta.com or call the Ride Line at 504-248-3900.