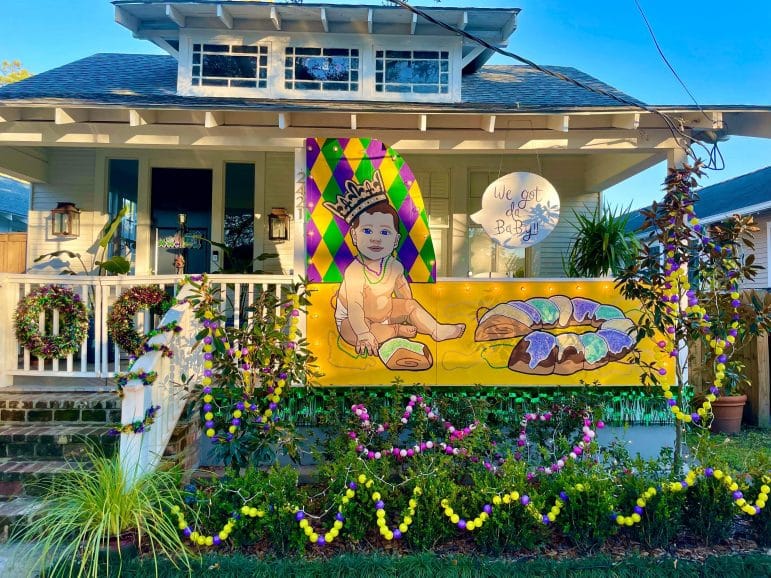 “We Got Da Baby!” house on State Street.

With no constraints to follow, krewe members improvised their individual whims. The Bergers of State Street decided to lean into their name by turning their house into a burger joint. 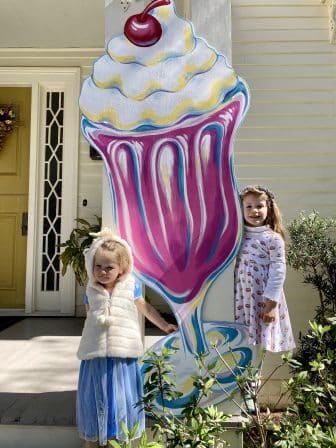 Lillian and Grace Berger at the “State Street Soda Shop”

“We’re the Bergers!” laughed Amanda Berger. “So, our float is — having burgers with the Bergers.”

The Berger house float affiliation is a family affair. The girls’ grandmother, Louellen “Lou-Lou” Berger, also has a house float up the street.

Darryl and Louellen Berger’s house float is “Maison Masquerade.” The Bergers are also members of the Krewe of Red Beans, and the krewe flag hangs from the house’s double- gallery. 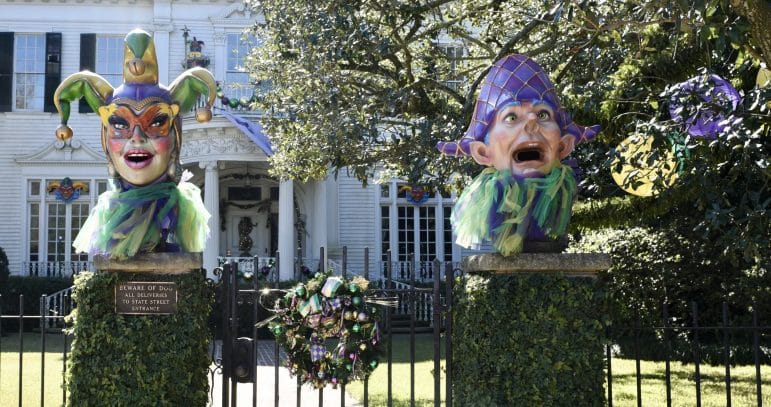 QR codes are interspersed along the elder Bergers’ fence leading to a YouTube video of a last year’s house float musical production video, “Masquerade, No Parades,” and this year’s Mardi Gras video “We Don’t Talk About Covid,” both with lyrics by Louellen Berger. The piece was recorded by the St. Charles Avenue Presbyterian Church choir members and arranged by Steven Blackmon.

The Bergers’ house is also well known as the punny Skeleton House during Halloween season. 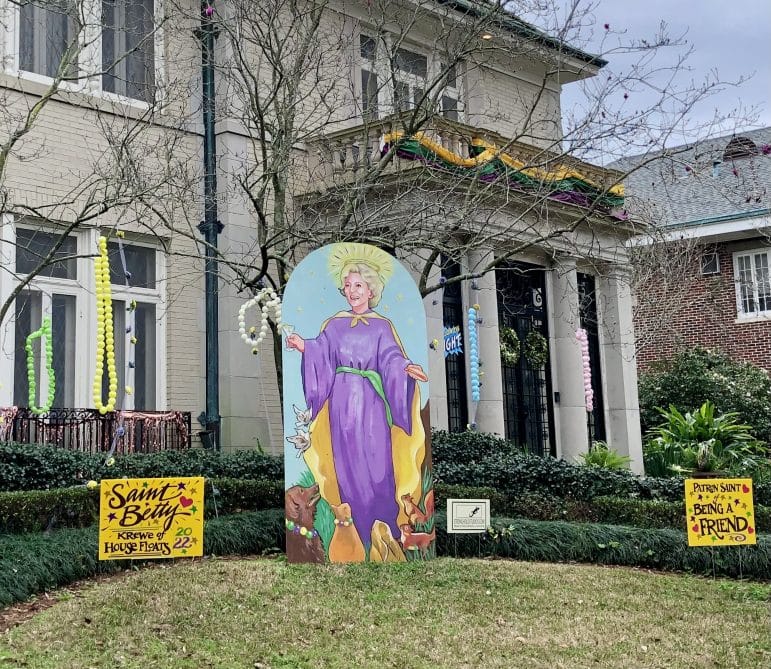 The “Saint Betty Brings the Chaos” house float presents “Saint Betty” in a grotto as a celestial being, much like the Virgin Mary statues found on local lawns and gardens for over a century.

Blankenship used Stronghold Studios for the second year to create her float art. She said she wanted to play on something relevant, celebratory and timely. Last year, the house featured “Saint Dolly Parton.”

“We strung 99 roses behind Betty’s image, one for every year of her life,” said Blankenship. “Then we placed a hot dog and a martini in her hands. It’s the diet that White said extended her life. Plus lots of pets, because she loved animals.” 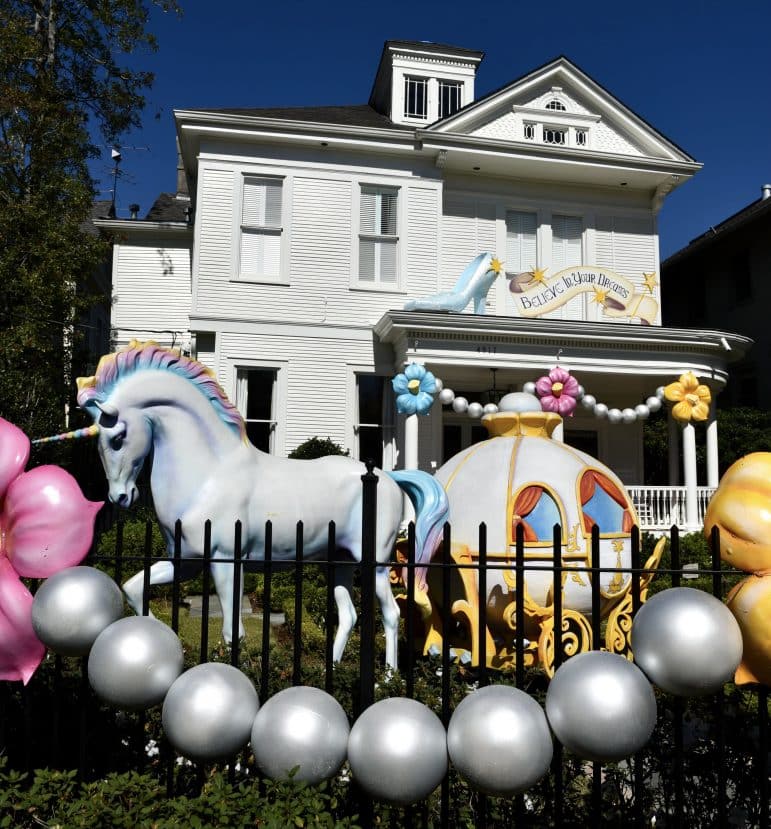 Near St. Charles Avenue and Upperline Street, the “Believe in Your Dream” house float is inspired by the Cinderella fairytale. Massive silver pearls are draped by the house’s columns; a giant sparkly glass slipper rests atop the porch roof; and a glass coach pulled by a unicorn takes prominence in the St. Charles Avenue house.

“Once Upon a Time in the Magical City of New Orleans” are the words written across the SUV-sized storybook featuring a painted illustration of horses pulling a carriage with St. Louis Cathedral in the background.

Stage director Dodd Loomis is responsible for creating State Street’s king cake “We Got Da Baby” house float, which has its own video. Loomis created his house float from last year’s house float boards. This year, he collaborated with artist Brooke Brazil, who just happened to be in New Orleans. 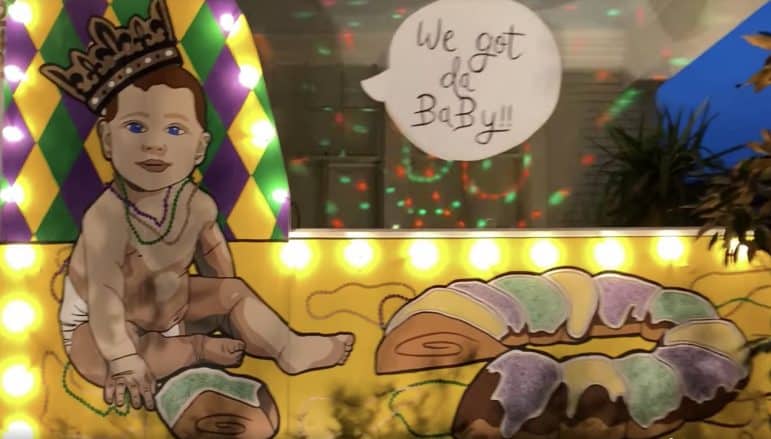 “We Got Da Babu” on State Street doubles as a birth announcement.

The idea was inspired by the Loomis’ son, Wiley, born Jan. 10. Loomis sketched out the vision and text bubbles, and together Loomis and Brazil carried the boards up several flights of stairs, where Brazil executed the float off the cuff at an Airbnb.

“We did it last year, too, and felt it was really important to keep the spirit of Mardi Gras going this year,” Loomis said. “We did the ‘Hamilton’ float last year; this is what it’s all about.” Last year’s float proclaimed: “We’ll be back.” 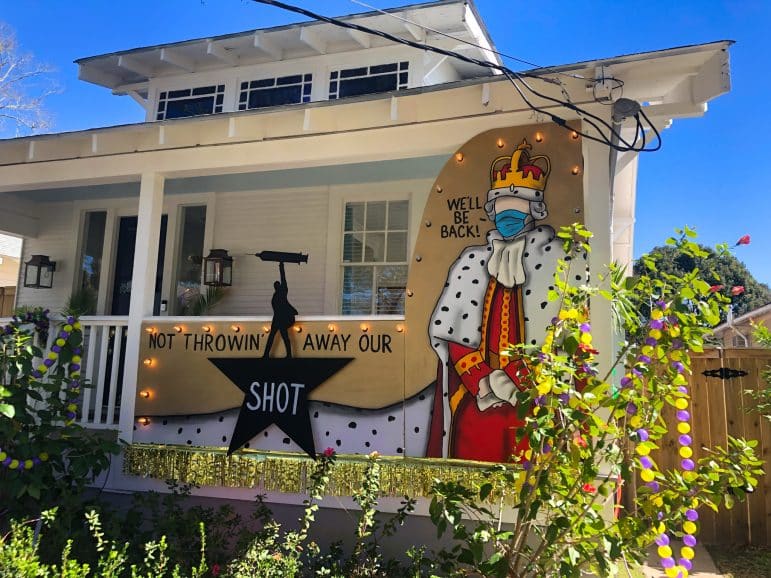 Dodd Loomis based the family’s 2021 house float on the musical “Hamilton.”

Retired Big Easy Rollergirl Megan Boudreaux, the founder and admiral of the Krewe of House Floats, continues to be overwhelmed by the popularity of her creation. However, this year has been easier than last.

“This year is a lot less pressure since parades are back, and we’ve been around the block,” said Boudreaux. “So, we had a little better idea of what to expect.” 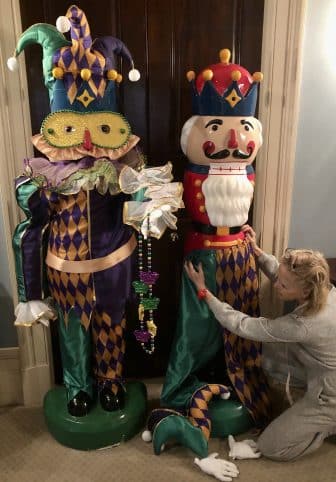 Courtesy of the Berger family

It all started with a social media quip. Boudreaux has relayed more times than she can remember that it was all just a joke. She says her idea of decorated houses replacing Mardi Gras parades during Mardi Gras 2021 was sparked via a Twitter exchange.

Last year’s housebound New Orleanians leaped at an opportunity to channel their bridled creative Carnival energies. Transforming houses into Mardi Gras parade float replicas became a sensation across the region and has even spread across the nation among New Orleans ex-pats.

Last year, Boudreaux said, more than 3,000 households participated in Yardi Gras. The 2022 krewe is down to 900 or 1,000, but the number is changing constantly.

This year, St. Charles Avenue has only a handful of houses, and they are not as grand as the year before. With the return of the parades, the artisans who created the big-ticket house float productions, like the papier-mâché brontosaurus and triceratops, are needed elsewhere.

Because of the previous year’s overwhelming response to the project and the hundreds of locals seeking guidance on how to proceed, subkrewes had to be employed.

“Now we can start to plan more for the future,” Boudreaux said. “We are thrilled that so many folks are helping us carry on this new tradition.

The tradition includes the KoHF Giving Fund. This year, it supports local culture bearers in partnership with the Music and Culture Coalition of New Orleans. Donations will be split among CultureAid NOLA, Funky Uncle Live and Studio Be’s Eternal Seeds.

To donate and learn more about the KoHF, visit kreweofhousefloats.org.