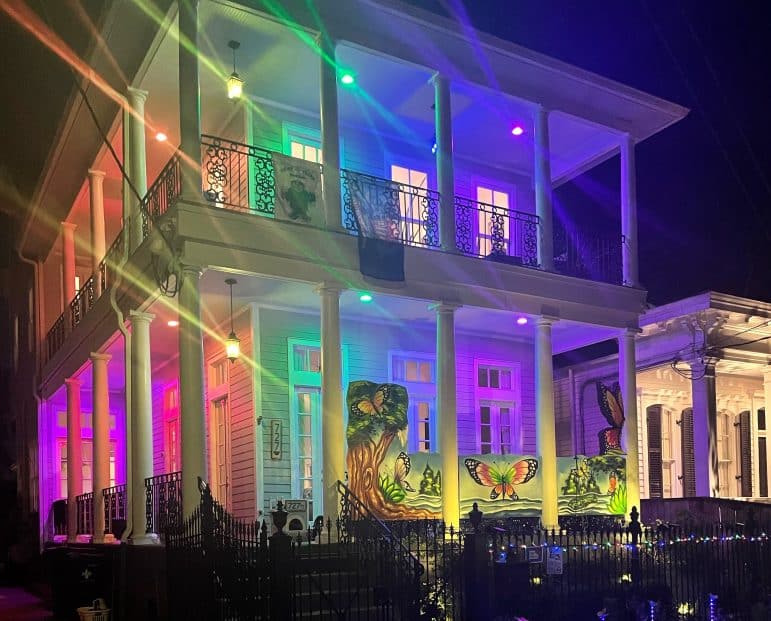 The residents of the Irish Channel are once again showing their creativity and Carnival spirit in Year Two of the Krewe of House Floats. This year, the neighborhood’s theme is “Down on the Bayou.”

The Irish Channel subkrewe captain, Autumn Town, said that the theme is a way to pay homage to bayou communities struggling to recover from Hurricane Ida. Because New Orleanians are able to decorate their homes while so many people on the bayou are still rebuilding, the subkrewe is also holding a fundraiser for Ida relief. The KoHF participants are collecting supplies and funds for the People of the Bayou campaign as part of the neighborhood efforts.

Town was the subkrewe’s co-captain last year and is flying solo this year. She first got involved when KoHF started in 2021 from a random post that popped up on her Facebook feed.

“I am a huge fan of Mardi Gras parties, costuming and decorating, so this sounded perfect — a way to still celebrate from home, but still have some of the beauty and artistry of Mardi Gras in our neighborhoods,” Town said. “I also appreciated that the goal was to provide employment and aid for those artists and culture bearers more heavily hit by the pandemic. I volunteered because I loved the idea, and I wanted to help bring it to the Channel.”

Not surprisingly, fewer Irish Channel residents are participating in 2022. Last year, the subkrewe had more than 100 house floats; this year, about 42 are registered to be listed on the KoHF map, although other residents may be creating house floats.

“I think people are exhausted in general. Two years of pandemic has been really hard on everyone, even if they’re not struggling with money or mental health,” Town said. “And I think lots of people are so excited about Mardi Gras this year that they are foregoing the house float.” 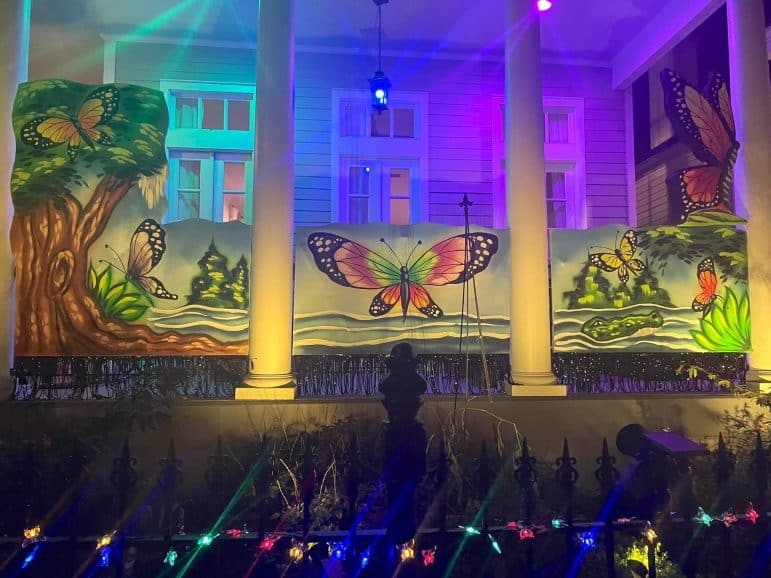 Elizabeth Carter, who lives on First Street, is honoring the bayou butterflies this year as her creative contribution to the subkrewe theme. Her own butterfly garden is registered with the North American Butterfly Association and is a Bronze Level Native Garden certified by the Native Plant Initiative of Greater New Orleans.

Carter went forward with an elaborate house float despite a lot of damage from Hurricane Ida. “I debated whether to participate this year,” she said. “The interior of my house is still a complete wreck from Hurricane Ida. But at some point I decided I needed something to cheer me up, too.”

Carter worked with float artist Rene Pierre to create last year’s “Shark Week” float for the subkrewe’s 2021 “Channel Surfing” theme.  Although her theme and decoration are totally different in 2022, some components of the float are the same.

She again turned to Pierre of Crescent City Artists, who uses panels that can be re-used from year to year. He repainted them with the “Bayou Butterflies” theme and carved a new prop. Michael Dixon made the sign, and Carter did some small touches and the spectacular lighting herself.

“He brought me a masterpiece, and it definitely cheers me up,” Carter said. “I was excited to be able to dedicate a float to bayou butterflies and, by extension, native plants. I hope my float brings people a bit of joy and inspires people to reconsider the way they landscape.” 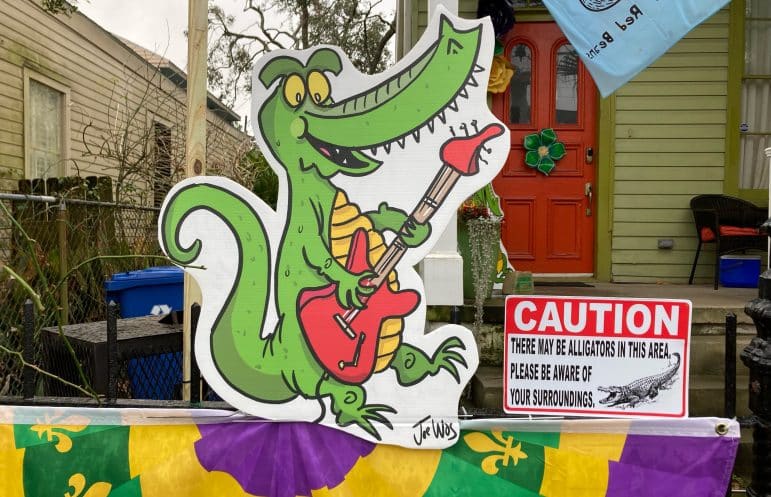 Last year, Barbara Newton and Lee Howard made their elaborate “Gilligan’s Island” house float from scratch. “Normally during Carnival season, it is a marathon of parades, parties and costume creation,” Newton said. “Coupled with a pandemic that was keeping us home, we had all the time in the world last year to create ‘Gilligan’s Island.’”

This year, their Seventh Street house float theme is “Alligator Alley.” Busy with other Carnival activities, they used pre-made cutouts of alligators by Joe Wos of SecondLine Art and store-bought decorations instead of crafting everything themselves.

“It makes me happy when I drive by decorated house floats. I love seeing the creativity,” Newton said. “House floats represent the spirit and determination of New Orleanians.”

Howard adds: “The turnout last year was amazing, and I think it gave out-of-towners an opportunity to really explore more of the city than they might not otherwise see. We talked with many, many folks. Even the granddaughter of the creator of ‘Gilligan’s Island’ showed up for a photo.”

Visitors are still interested in viewing house floats, according to Cassandra Snyder, the owner of the local tour company Soul of NOLA.

“I am getting requests this year also to see house floats. Travelers coming to New Orleans have read about them and are asking to see them,” Snyder said. “It is also a nice surprise when we just come across one in the course of a tour. It’s like an unexpected jewel, a real treat — both for me and the visitors to our city.”

Throughout the Carnival season, Uptown Messenger will be visiting with neighborhood KoHF subkrewes across Uptown to see how they’re doing Yardi Gras.