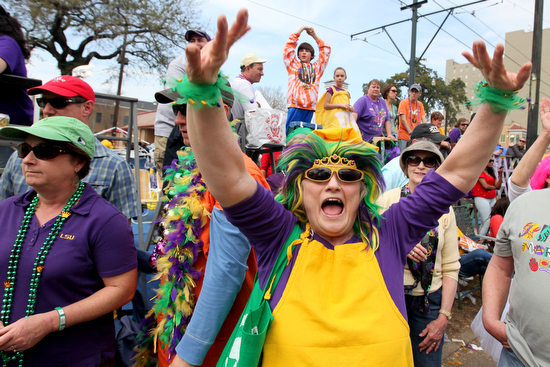 With several hundred thousand people about to descend on the streets of New Orleans, each of us should make a personal commitment to avoid becoming a statistic during Carnival season. After all, Covid-19 and crime are the overarching themes of this year’s Mardi Gras. Although parade goers might not see floats or throws touting either, they definitely will be lurking in the background.

Tell that to Ed Robinson Jr., founder of L&R Security, whose employees dressed in bright yellow T-shirts are a welcoming presence at Jazz Fest and other major events. Robinson’s wife, Octavia Robinson, a retired New Orleans police officer who had been vaccinated and boosted, just died from Covid. And tell that to Joel, a 30-something massage therapist at Nola Bliss Massage, who spent a tough two weeks fighting the virus and suffering from “Covid fog” even though he had received all his shots.

It is true that daily Covid-19 case rates continue to decline. Yet, on average, thousands of Americans are still dying from the virus each and every day. In Louisiana 1,396 new cases and 46 new deaths were reported Wednesday (Feb. 16). Those statistics don’t necessarily reflect every new case or every new death. They just means those are the cases that made it into the reporting system.

More than a few citizens believe that the crime statistics released by the NOPD tend to be less than totally accurate. The police have admitted that manpower issues prevent them from answering every call or writing up every crime. The city has even asked citizens to only use 911 for serious emergencies during Mardi Gras. When dozens of cars owned by film industry employees were vandalized last week in the Lower Garden District, the NOPD failed to answer the call for service in a timely fashion. A Louisiana mother and Iraq War veteran who would have been carjacked on I-10 had she not pulled out her gun, is disappointed that the NOPD classified the incident as only a “disturbance.”

Under classifying crimes or failing to write up all the calls is one way that the NOPD can make it seem that the crime problem is getting better. But it’s not. The social media site Nextdoor frequently includes posts describing crimes that are never properly investigated. Other posts encourage citizens, especially women, to carry weapons to protect themselves.

A special thanks to all the Louisiana State Police and federal agents who are assisting the NOPD in helping keep New Orleans safe. The citizens of New Orleans need all these highly trained men and women now more than ever. Please take that extra minute to thank an NOPD, state or federal law enforcement officer you might encounter. Delivering snacks or a meal to your local police precinct is also a big help to officers who will be working 12-hour shifts through Fat Tuesday. To adopt a cop this Mardi Gras season, visit the New Orleans Police & Justice Foundation website.

What is your personal plan to stay safe? Decorate several medical masks to wear to the parades and balls. Watch several of the parades on mobile devices instead of in person. Think twice about hanging out in tightly packed crowds.

Pay attention to your surroundings and people who might not have your best intentions at heart. Don’t walk the streets alone. Carry only what you need. If you own a gun, leave it at home. Park your vehicle in a secure location. If you use Uber or Lyft, check the driver’s credentials. Most of all, keep your guard up.  If a situation or a group of people make you feel uncomfortable, follow your gut.

Visitors and locals alike who participated in Mardi Gras 2020 spread Covid-19 across the United States. This year’s celebration could also have unintended consequences. Crime has caused a level of fear that hasn’t been seen in decades. Only through an enhanced level of personal responsibility can you and your family avoid becoming a statistic. Have a safe Mardi Gras!