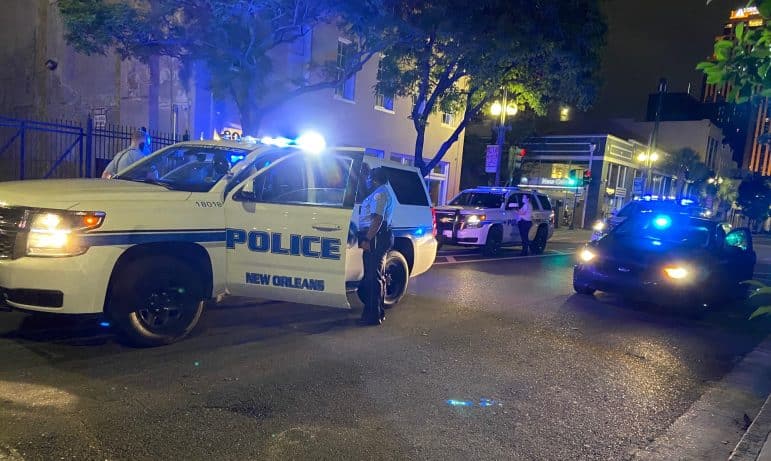 Many New Orleanians were disappointed in yesterday’s press conference (Feb. 2) featuring Mayor LaToya Cantrell and NOPD Superintendent Shaun Ferguson. Cantrell correctly described the city’s current crime wave as “domestic terrorism,” a hot buzz word on the national crime scene. Yet instead of hearing a full-fledged plan with fresh new solutions and a real sense of urgency, citizens mostly saw the mayor deflect criticism from her office by lavishing praise on the police chief and blaming the other branches of government.

Instead of talking about new recruitment and retention efforts to build back our historically understaffed police force, Ferguson described how old techniques could be retooled using an ever-shrinking workforce. While Ferguson appears to be a nice guy, he may not be up to the task at hand. What New Orleans really needs is a highly seasoned no-holds-barred leader like retired Lt. Gen. Russel Honoré, who has a successful history of kicking ass in New Orleans and around the world.

A native New Orleanian and graduate of O. Perry Walker High School, Ferguson worked his way up through the New Orleans Police Department during his more than 20 years of service including serving as commander of two of the department’s districts as well as heading up the Educational and Training Division, which supervises the police academy. Cantrell selected Ferguson as her chief just over three year ago, in January 2019. Since joining the force, Ferguson received a bachelor’s degree in business administration and a master’s degree in criminal justice from Southern University of New Orleans.  Ferguson and Cantrell work very closely together. In fact, it appears that he takes her lead on every major issue.

Cantrell would never choose to fire Ferguson — and wouldn’t have to in order for Honoré to step in. The City Council could bring him on board as their criminal justice czar to coordinate and execute the kind of multi-layer plan that would utilize available federal, state and local resources that the mayor and police chief have so far failed to present. After all, Honoré came to New Orleans’ aid after Hurricane Katrina to coordinate military relief and brought order to the haphazard chaos. More recently, House Speaker Nancy Pelosi tapped Honoré to lead the review of security failures following the Jan. 6, 2021, attack on the U.S. Capitol.

Born in Lakeland, Louisiana in Pointe Coupee Parish, Honoré served as the 33rd commanding general of the U.S. First Army at Fort Gillem, Georgia. Known as “The Ragin’ Cajun,” Honoré was never one to hold back whatever he thought. He held a number of high-ranking military positions and received numerous military honors prior to his retirement. Through his “Green Army,” Honoré has become a leader in Louisiana’s environmental movement, fighting to save lives and communities by eliminating pollution in the upriver area known as Cancer Alley. Honoré also founded a mentoring program for young black males at SUNO.

Former Mayor Ray Nagin, who worked with Honoré in the aftermath of Hurricanes Katrina and Rita referred to him as that “Black John Wayne dude.” If Honoré could bring together all those federal agencies to work cooperatively after Katrina, it shouldn’t take him long to confect a workable plan with the federal, state and local police; district attorney; judges; and sheriff.

Rebuilding the NOPD must be at the top of the list with higher start pay, promotions and a heftier benefits package. According to Michael Glasser, president of the Police Association of New Orleans, the NOPD lost 150 officers last year and hired only 40 men and women. The Metropolitan Crime Commission’s Rafael Goyeneche said that only about 900 officers are available to be deployed on a daily basis. “We’ve never had less than 1,250 officers. Every day the City Council and Mayor Cantrell delay prioritizing police recruitment is another day we fall further behind,” he said.

Random and senseless acts of violence are occurring every day. Already 22 homicides and 50 shootings have taken place in 2022. MCC statistics from the NOPD also show 50 carjackings and 61 robberies already this year. Some insiders doubt that the NOPD is submitting reports for all the crimes being called in, due to labor shortages. Cops often must choose between completing paperwork on moving on to the next crisis.

Realtor and mother Kelleye Rhein, 45, is lucky to be alive after being run over by carjackers while gassing up at Costco on Tuesday afternoon. Dr. Aarti Pais, a family practitioner at Touro Infirmary who stepped up to help Rhein, could have become a victim herself. Other nearby motorists just continued to pump gas while the tragedy unfolded. It’s no surprise that the Rhein and Pais are among the many families talking about leaving New Orleans.

Ferguson’s suggestions of more proactive patrols, longer shifts for officers and the use of  facial recognition software may only have limited success. Although Cantrell advocates for an increased use of tough love, it won’t solve New Orleans’ crime problems either. Until New Orleans political and criminal justice leaders figure out how to get violent criminals — no matter what age — off the streets, the city’s law-abiding citizens will not be safe. That’s why we need a visionary, outside-the-box thinker like Russel Honoré to lead the charge.

Friends of newly elected District B Councilwoman Lesli Harris will host a fundraiser tonight at The Chloe, 4125 St. Charles Ave. The event begins at 5:30 p.m. with tickets starting at $500.

Division D Municipal and Traffic Court Judge Mark J. Shea is running for re-election on the Nov. 8. He has served on the bench since 2009. Shea is known for helping consolidate the Traffic and Municipal Court dockets, reducing an “old case” archive by more than 385,000 cases.  His work, which cut the active case by about 50%, was a big win for those carrying over attachments which prevented them from getting a driver’s license or applying for a job.

Since the beginning of the Covid-19 pandemic, Shea has used 21st century tools to provide online case resolution through a state-of-the-art management system. Municipal and Traffic Court is currently located at 1601 Perdido, while the court’s offices in the 700 block of South Broad Street are being renovated.

Shea graduated from the Southern University School of Law and began practicing with his father, the former Judge John Shea, in 1984. He also served as a public defender before being elected to the bench.

PARTICIPANTS NEEDED FOR NEW SURVEY ON TRUST IN CITY GOVERNMENT

Mayor Cantrell is inviting residents to participate in an anonymous and confidential survey which was created to gauge trust in city government and specific city operations. The survey is part of the city’s Project Why initiative. You can complete the survey here.

This column was corrected to state that Alison Poort previously worked for Kristin Gisleson Palmer in District C, not Jay H. Banks in District B.