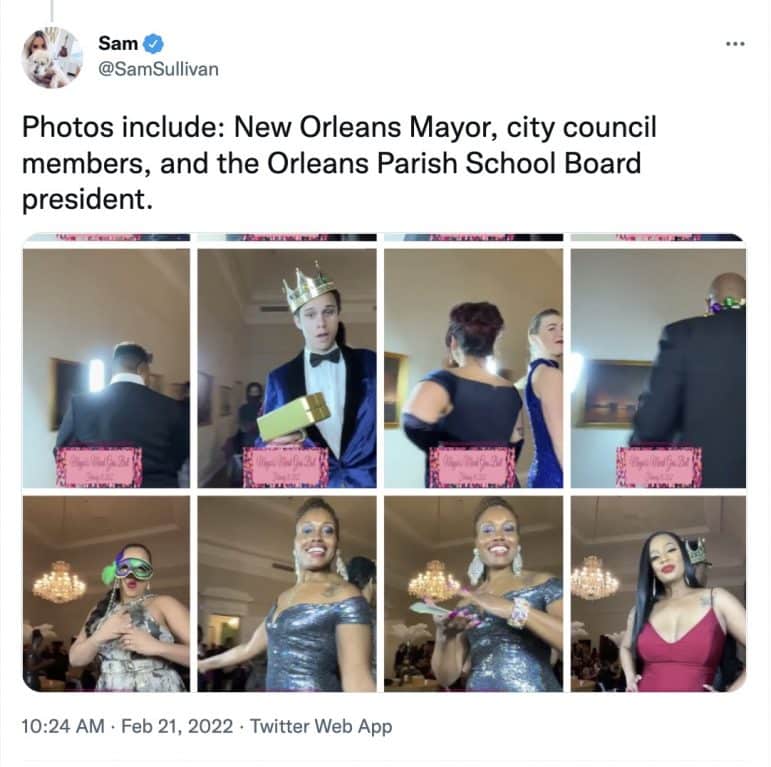 When New Orleans elected officials don’t feel the urgency to consistently wear masks at Carnival festivities, how can they expect citizens and visitors to take the rules seriously?  Social media outlets like Facebook, Twitter and Nextdoor have been blowing up with posts this week regarding the reckless behavior of Mayor LaToya Cantrell, her besties and others whose images were captured sans masks at the Mayor’s Mardi Gras Ball last Friday night. National and international media attention was extensive.

“Why waste your emotions on this,” wrote  Daveida Pittman on Nextdoor. “We all know what it is. But the citizens elected her again, so apparently people love the hypocrisy ….” New Orleanians  understand that the rules Cantrell put in place allow for masks to be removed when eating or drinking. Most of the Gallier Hall video and other images available appear to show that masks were barely worn once the party moved into high gear. After all, it’s hard to dance and sing comfortably while wearing a medical-grade mask.

Everyone makes mistakes. So why isn’t Mayor Cantrell willing to say she is sorry? Probably because she doesn’t feel sorry for her behavior Friday night any more than she feels sorry for having a jolly good time at numerous second-lines and parades recently. It is “regrettable” that masking wasn’t a priority at the Mayor’s Ball. What’s even more regrettable is that the other mask-less civic and elected leaders in attendance also failed to meet the standard voters expect. There were very few role models in the crowd.

Some New Orleanians have determined to limit their exposure to the pandemic during Mardi Gras by skipping a few parades or other mass events. Like most readers, I’ve always enjoyed a good parade. Catching beads that quickly clutter our closets is one of the simple pleasures of living in New Orleans. In an effort to curb my chances of getting sick, I’ve only attended one parade so far this year. We arrived early, sat in a mostly empty area and left before the parade ended.  Our masks were on the entire time.  While I intend to take in more events this weekend, I definitely plan on wearing a mask.

The number of cases of the Omicron variant is down in Louisiana and in almost every other state. New Orleans Health Department Director Jennifer Avegno said yesterday that 67% of New Orleanians are fully vaccinated. With most Carnival festivities taking place outdoors and the weather warning up, what’s the big deal of going maskless?

According to National Public Radio, a new even more contagious variant, BA.2, is making its way across the United States. BA.2 and is thought to spread 30% more easily than its omicron sibling. Rising up out of South America and already having moved across Europe to the United States, BA.2 could easily become the country’s dominant variant later this spring. One German doctor already remarked that “long Covid” won’t be a problem for many BA.2 patients because they will die quickly.

The free Covid-19 home testing kits that the New Orleans Health Department will distribute at the Muses parade can be a great resource for New Orleanians who might be infected. If you feel unwell, be sure to test early and often.

It’s never good when the FBI pays you a surprise visit or investigative reporters frequently develop stories about your employees or operations.

If New Orleanians really want serious issues about which to complain the Sewerage & Water Board should be near the top of everyone’s list.  From frequent flooding due to ongoing problems with pumps, never-ending billing errors, non-disabled employees selfishly using handicap parking stickers and constant boil-water advisories, there is something for everyone not to like.

Now we can add the ouster of two high-ranking S&WB officials who had built their own small organized crime ring, which specialized in payroll fraud and involved private contractors as well as other city employees.

Korban, S&WB’s executive director, admitted he didn’t have a clue about the illegal shenanigans happening right under his nose and said he would have taken action quickly if he had known. It is astonishing that during the last three plus years Korban had not built enough loyalty within his own staff (a nicer way of saying he needed more spies) to know where all the bodies were buried. The S&WB just approved a 9.5% raise for Korban. Is this a person who deserves to earn more than $300,000 annually while many New Orleanians are still suffering economic hardships from the pandemic — and ever-rising utility bills?

To be fair, when Korban was hired almost four years ago he took the helm of a severely broken agency that no captain has been able to control for decades. The members of the utility’s board, almost all Cantrell appointees, along with many members of the public, believe Korban is doing a yeoman’s job of trying to right the ship.  He seems like a nice guy but the proof is in the pudding.  It’s past time for Korban to clean up his internal mess and move forward full speed ahead.